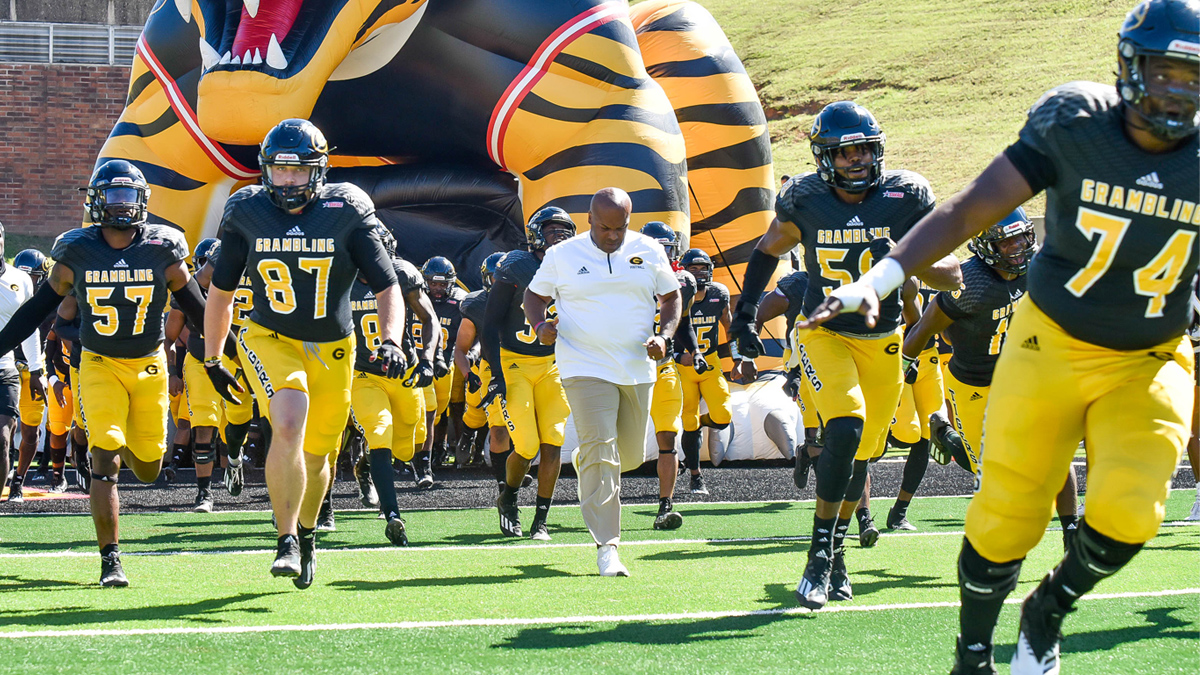 Grambling State heads to Tallahassee, FL to take on a streaking Florida A&M football team on its homecoming.

GRAMBLING, La. | The Grambling State University football team will look to string together back-to-back wins as the Tigers visit Florida A&M in a Southwestern Athletic Conference (SWAC) game. Kickoff against the Rattlers is set for 3 p.m. (central) from Bragg Memorial Stadium.

Grambling State (3-4 overall, 2-2 SWAC) enters the contest off a bye week and last played on Oct. 16. The Tigers got a pair of defensive touchdowns in pulling away from Texas Southern to celebrate a 34-20 Homecoming victory on Oct. 16.

Florida A&M (5-2, 3-1) have won four straight after a 38-17 non-conference road loss to South Florida on Sept. 18. The Rattlers jumped out to a 17-0 lead early in the third quarter at Mississippi Valley State last weekend and survived a last rally attempt by the Delta Devils to earn a 31-28 win.

Saturday’s game will be streamed live on ESPN+ as Butch Alsandor and Jorge Vargas will have the call. In addition, Grambling State will broadcast and stream the game on the Grambling State Sports Radio Network. The game can be heard in Ruston (KRUS – Hitz 96.3) and in Monroe (KNNW – 103.1 FM). The Tigers’ broadcast crew of Ossie Clark and Nick Harrison will call all of the action.

“It was good to relax a bit last week and get some rest,” Grambling State head coach Broderick Fobbs said. “We were able to get away from this thing for a little bit and try to get ready for the long haul. I thought we did a really good job of trying to get everybody healthy and remain healthy, but also continue to get better at the same time. We’re excited about what we are doing and was very, very pleased with practice last week. The team had a lot of energy and everybody was ready to go.

“We are playing against a Florida A&M team, who was one point away from perhaps winning their division. They are a very tough opponent at home, and extremely talented on all three phases. Coach Willie Simmons does a really good job and the staff does a really good of putting together a really good football team. We’re excited about the opportunity to play in this game and we’ll be on Florida soil, which has been good to us recruiting wise.”

– Grambling State and Florida A&M will be meeting for the 16th time in the series, but the first time as members of the SWAC

– The Tigers played the spring season, while the Rattlers elected to forgo their final season in the Mid-Eastern Athletic Conference (MEAC)

– The Tigers are coming off a 34-20 Homecoming victory over Texas Southern on Ov. 16

– Against TSU, Grambling State forced three turnovers and has amassed 10 over the past three games

– Garrett Urban continues to be solid in the kicking game as he is 9-for-11 in field goal attempts (81.8 percent), with both misses coming between 40-49 yards

– Grambling State begins a stretch of back-to-back road games, before its home finale on Nov. 13 against Bethune-Cookman

– The Rattlers have won four straight, including a 31-28 road victory last weekend against Mississippi Valley State

– FAMU running back Bishop Bonnett has 640 carries and is slowly approaching 1,000 yards for the season

– Grambling State has dominated the series, having won eight of the last nine meetings

– GSU own the longest winning streak in the series – seven games

– Grambling State is 23-3 in games played in October

– The Tigers are riding a three-game conference road losing streak, which dates back to the 2019 season

LOOKING AHEAD TO WHAT’S NEXT

– Grambling State returns to action with a trip to Arkansas-Pine Bluff on Nov. 6

– The Tigers and Golden Lions last met in the spring, with UAPB picking up a 48-21 victory

– Prior to the spring loss, Grambling State had won four straight against UAPB