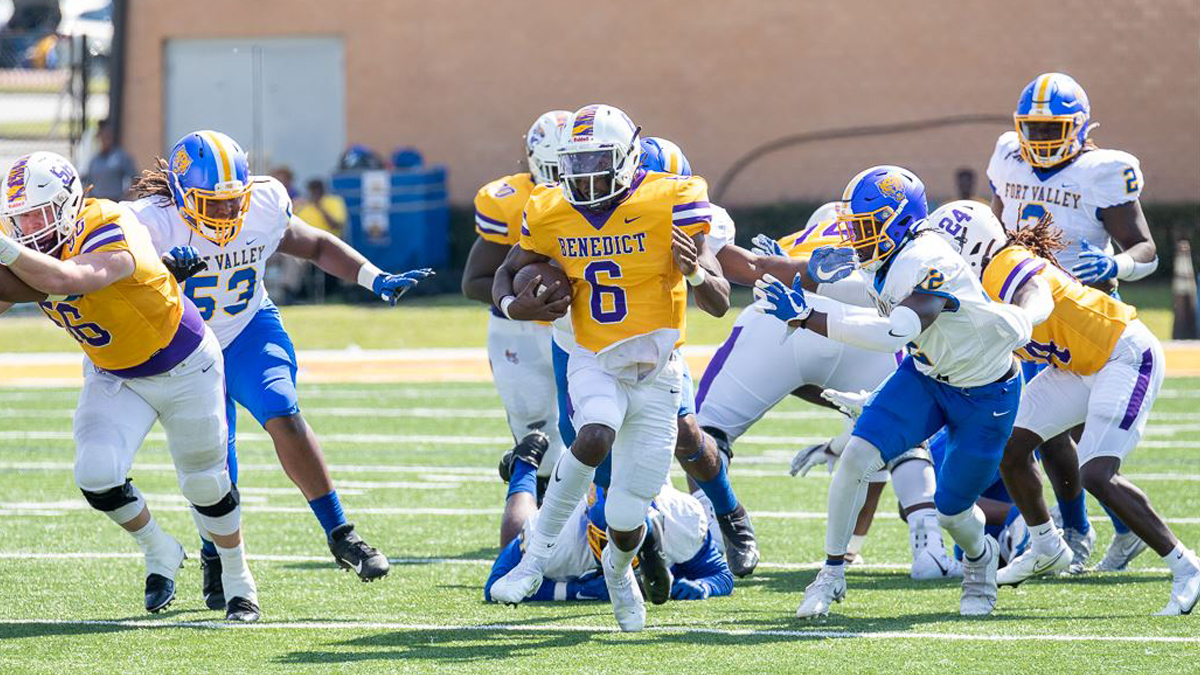 Benedict College saw its three-game losing streak come to an end as it handed Miles College a homecoming loss.

FAIRFIELD, Ala. – Freshman quarterback Zavien Foster made his collegiate debut on Saturday, and helped guide the Benedict Tigers to a 24-21 victory over the two-time defending SIAC champion Miles Golden Bears, spoiling their Homecoming party.

The win improves the Tigers to 3-3 overall. This was not a countable SIAC game for the Tigers, who remain 0-2 in the SIAC. Miles lost for the second straight week and falls to 2-4 overall and 1-2 in the SIAC. Benedict beat Miles for the first time since 2010, snapping a five-game losing streak to the Golden Bears.

The Tigers jumped out to an early 14-0 advantage and had that lead at the half. Miles came back to take a 21-17 lead with 4:30 left in the game. The Benedict offense, with Foster at the controls, moved the Tigers 71 yards on 12 plays, with Omarion Coleman scoring on a 1-yard run on fourth down with just 19 seconds left for the game-winning score.

“I’ve got to give God all the glory, honor and praise,” Benedict head coach Chennis Berry said. “Our kids are a resilient group; they never quit. We haven’t finished, prior to this one, on the winning end of the stick, but our kids never stopped believing. Those guys fought from the beginning of this game to the end. I loved the way they played, I loved the way they fought, and I’m proud to be the head football coach at Benedict College.”

Foster, a true freshman from Spartanburg, S.C. and Dorman High School, saw his first action of the season with starter Eric Phoenixstill out with an injury. Foster completed 13-of-27 passes for 157 yards and one touchdown and one interception. He also had a team-high 90 yards rushing and one touchdown.

“You’re talking about an amazing young man, a true freshman who has not ever taken a college snap, to come into Miles College, the defending conference champs, on Homecoming in hostile territory, and lead us to a victory. He played amazing,” Berry said. “He was composed, he was sharp, he was confident. But he’s been that way all week in practice. We knew, with Eric Phoenix being out, he gave us the best chance to be successful of moving our offense the way we know we are capable of moving. He’s from a powerhouse Dorman High School football team. We knew he had the talent and the ability to lead us to victory, and I’m so proud of Zavien Foster.”

Midway through the first quarter, the Tigers drove 77 yards on just five plays for the game’s first score. Tayven Grice started off the drive with a 27-yard run, then Foster completed a 37-yard pass to Steven Campbell to give the Tigers a first-and-goal from the 6-yard line. Foster ran it from the 6-yard line to give Benedict a 7-0 lead with 4:36 left in the first quarter.

Foster found Te’Sean Pressley, who made a juggling catch for a 18-yard pickup, at the start of the second quarter, then connected with Eddie Neal for an 11-yard touchdown to put the Tigers ahead 14-0 with 13:33 left in the first half.

Late in the second quarter, Miles drove the ball and made it to the Benedict 23-yard line, and went for it on fourth-and-four, only to be stopped by the Tiger defense.

Foster was sacked on third down on the next series, and the Golden Bears got the ball back and drove 90 yards on 10 plays. Christopher Brown scored on a 48-yard pass from Jacob Millhouse to put the Golden Bears ahead for the first time, 21-17 with 4:30 remaining.

“Our philosophy is never stop believing,” Berry said. “I was cool, calm and collected through it all. We practice these situations all the time. I told our guys, let’s get first downs and then it turns into touchdowns. They kept believing and we took the ball all the way down the field, never blinked, and found a way to win the game at the end.”

Foster found Coleman for a 22-yard completion on first down. He followed that with a 12-yard pass to Darius Philon and picked up another 19 yards on a quarterback keeper. On third-and three from the 15-yard line, Foster threw a completion to Te’Sean Pressley for a 10-yard pickup, giving the Tigers first-and-goal from the 5-yard line with 1:20 on the clock. A pair of two-yard runs by Foster and Coleman gave the Tigers third-and-goal from the 1-yard line with 34 seconds left. Coleman was stopped on third down, but forced his way into the end zone on fourth down for the game-winning score.

Miles got the ball back with 14 seconds left, but Keeven Ross intercepted Jacob Millhouse with four seconds left to clinch the victory for the Tigers.

“We knew we were going to have to come into this game and take it. They weren’t going to give it to us,” Berry said. “And our young men played lights out on offense, defense and special teams.”

The Tigers return home next week to take on Albany State. Kickoff is 2 p.m.