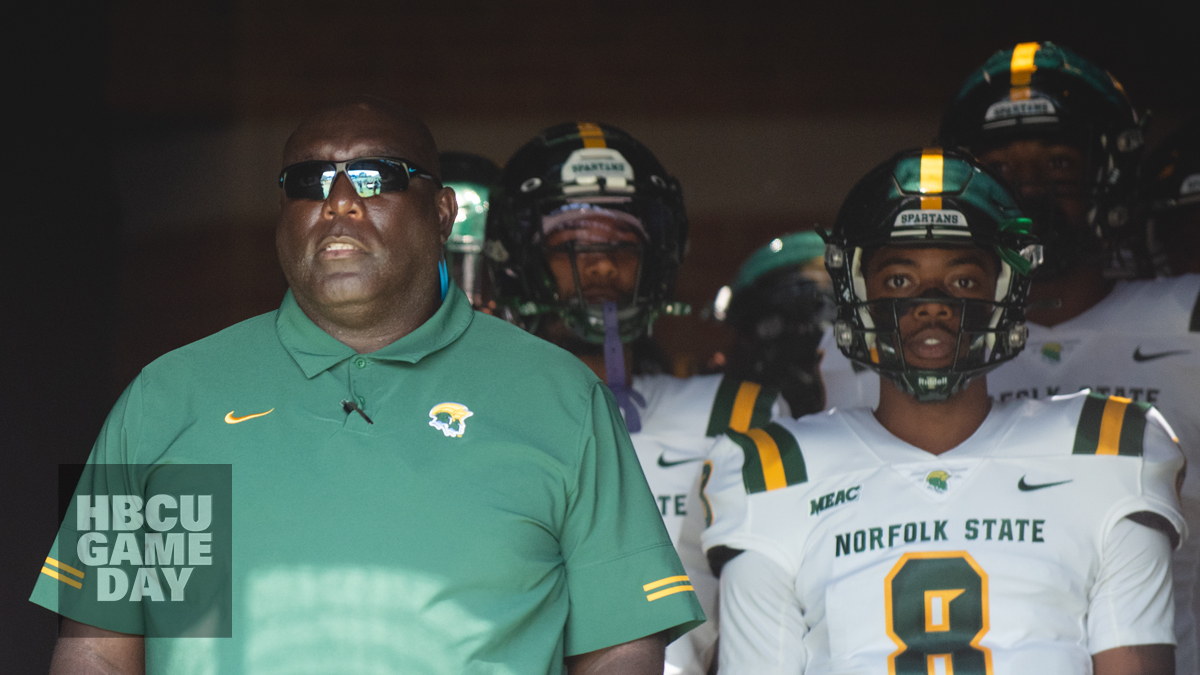 Dawson Odums took over a veteran Norfolk State football program this spring and had to win over his players rather quickly. So far it seems to be going pretty well.

The past 18 months have been full of changes for most of the world — maybe even more so for Norfolk State football.

After sitting out the 2020 fall season with the rest of the MEAC, the school was a late opt-out of the spring 2021 season. Then it lost head coach Latrell Scott to East Carolina a few weeks later.

The program remained in limbo for a few months before eventually bringing in Dawson Odums from Southern to take over in May. Despite his success at Southern, there was no guarantee that his new players would buy-in. But heading into Week Five, Odums says the progress in such a short amount of time has been satisfying.

“You can really see a difference in this football team. I don’t know what it used to look like in the past, but since we’ve been here in July — and we’re talking about in a short period of time — you’re able to see a different heartbeat,” Odums said on the MEAC weekly press conference. “You’re able to see a different mentality. And that’s a testament to our assistant coaches and the players for trying to buy into a new process. And if we can keep getting better at that process we can have an opportunity going down the stretch to hopefully be competitors in October.”

Many of the upperclassmen expressed trepidation, publically and privately, about the transition to another staff prior to Odums’ hiring.

“As the head football coach of this team, I’m appreciative of the fact that the seniors respect me enough as their head football coach and just be able to say ‘you know what — we’re going to try it coach’s way and believe in it. But success helps that. If we wasn’t having any success, it would be harder to turn the corner.”

It starts with NSU’s senior quarterback Juwan “Pootie” Carter. Carter openly pondered about hitting the transfer portal if interim head coach B.T. Sherman didn’t get the job. But he stayed put when Odums was hired, and has the team trending in the right direction. When asked if the success was due to Carter buying into what Odums brought to the table or Odums catering his gameplay to his quarterback’s talents, the head coach said it wasn’t really one or the other.

“It’s not about whether he is adapting to the philosophy that we have,” Odums said. “It’s about us getting better as a team and we’re all getting better. It’s like being a stepdad to somebody that’s 17, 18-years old. You don’t expect them to call you dad, you just expect them to respect you as a father.”

“He has a better idea of the talent that we have on offense and I think that was one of the decisions that went into putting your staff together,” Odums said. “Just making sure you gave yourself a chance to be successful. We knew it was a lot of pieces of the puzzle coming back on offense and it starts with Carter. We knew he had a great understanding of the offense that he was in and we didn’t want to blow it up. We wanted to have some consistency and I felt like if we could keep our offense together, they had enough talent to be successful.”

So far Norfolk State is 2-2 with wins against Elizabeth City State and St. Francis after opening the season with back-to-back FBS games. And Carter’s numbers have been very good. He’s completing nearly 62 percent of his passes for 775 yards and 10 touchdowns while having thrown just two interceptions all year.

Odums says that while his quarterback’s talent is obviously there, it’s his leadership and poise that have guided the Spartan offense.

“Each week we get a little bit better and our leaders are doing an outstanding job. And Carter is one of those guys who we call captain,” Odums said. “His leadership is through the roof. He’s taken the steps necessary, not only to be a great quarterback but also to be a great leader. And I’m proud of him for that.”