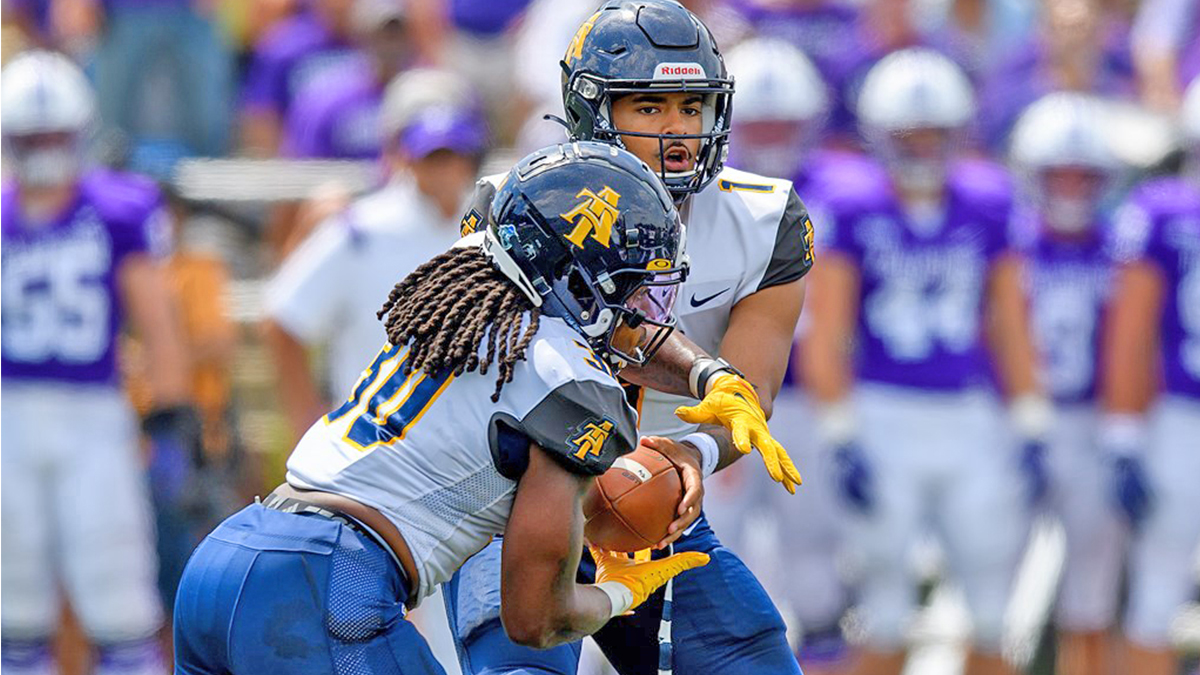 Key players return for the Aggies as they try to prevent an 0-2 start and seek their first win vs. an ACC team at Duke tonight.

NC A&T did something last week it had not done in over a decade, i.e., lose a season opener.

The Aggies’ 29-18 loss at Furman was the first since the Aggies started the 2010 season losing to Winston-Salem State and lost its first seven games en route to a 1-10 finish under head coach Alonzo Lee. That now seems like ancient history.

That was the year before Rod Broadway took the job and methodically turned the Aggies into the HBCU power they have become. Not only have they posted a 78-27 record (.742) and had just one losing season since – Broadway’s 5-6 record in 2011 – but they have brought home five MEAC championships over that span, the last two under third-year head coach Sam Washington.

So, an 0-2 srtart for the first time since 2010 is what Washington and his troops are trying to avoid as they travel just 45 minutes down I-85 from Greensboro to Durham to face FBS ACC member Duke tonight (Friday, 8 p.m. on ACC Network).

The Aggies, now in the FCS Big South Conference, are likely to face a salty Blue Devils team coming off a last-minute 31-28 loss last Saturday at Charlotte, an FBS team out of Conference USA. The 49ers are one of the FBS scalps the Aggies have claimed in their recent success, getting a 35-31 win in Charlotte in 2017.

That win came during a three-year stretch where the Aggies got consecutive wins over FBS opponents.  In addition to the win over Charlotte, they won at Kent State, 39-36 in overtime in 2016 under Broadway. In 2018, Washington’s first year, the Aggies won at East Carolina 28-23 in the now famous ‘bring me my money’ postgame quote from Washington that went viral.

NC A&T shaking off the rust

But the Aggies have never beaten an ACC team. In their only meeting vs. Duke in Durham in 2019, A&T trailed 10-7 early in the second quarter after a 66-yard TD run from running back Jah-Maine Martin but gave up three touchdowns in the final three minutes of the half en route to a 45-13 loss.

The loss at Furman was the first game for the Aggies in 623 days after they decided to sit out the 2020 fall and 2021 spring seasons. The rust showed.

“We all were rusty, players and coaches,” said Washington. “I thought we were ready, we appeared ready in practice. But you can never tell until you’re in a real game.”

Keeping it simple: ‘We do chicken.’

Washington, who spent seven years under Broadway as defensive coordinator, like his predecessor, often reduces NC A&T’s strategy to three simple components – 1) stop the run, 2) protect the football and 3) win the kicking game.

‘We do chicken,’ is the way both Washington and Broadway have termed the strategy. Against Furman the Aggies didn’t do two of them well. They’ll have to do all three well to come out of Durham with a win.

They pretty much held the Paladins running game in check until a nine-play, 61-yard late fourth-quarter drive that led to a game-clinching field goal. Furman got 47 of its 125 rushing yards for the game in that drive.

First-time starting quarterback junior Jalen Fowler had two critical turnovers. With the Aggies trailing 10-3 at the half, he threw an interception in the first series of the third quarter that led to a 41-yard Furman field goal. After driving A&T deep into Furman territory on the next possession, he fumbled on 2nd-and-goal at the 4-yard-line with the Paladins recovering. On the next play, Furman scored on an 87-yard touchdown pass to move out to a 23-3 lead.

“That was a 14-point swing,” Washington noted.

Fowler came back to throw two second-half touchdown passes and pull the Aggies within a score. But it was from there that the kicking game let them down. They got two fourth-quarter turnovers in Furman territory and drove to just outside the Paladins 20 but failed on two field goal attempts.

Washington said he travelled to Furman minus 11 players, seven starters, most who were out with soft tissue injuries and some because of COVID-19 contact tracing protocols. Those included all four starting defensive linemen. A&T did not register a sack vs. Furman and put little pressure on QB Hamp Sisson who threw for a career-high 362 yards and three touchdowns. Duke grad quarterback Gunnar Holmberg was an efficient 20 of 29 for 228 yards and one TD without a pick vs. Charlotte.

“Our front four – our legit front four – will be back come Friday,” Washington said at Monday’s press conference. That means preseason all-Big South defensive end Jermaine McDaniel, fellow end Devin Harrell, and tackles Karfa Kaba and Michael Branch will suit up. “We’re happy to have those guys back,” said Washington. McDaniel led the Aggies with 7.5 sacks in 2019.

“Pass defense begins with pass rush,” said Washngton. “We were not able to get any pressure on the quarterback.”

They will be needed to limit Holmberg and contain Duke senior running back Mantaeo Durant who rushed for a school-record 255 yards on 29 carries at Charlotte scoring on 59-, 55- and 5-yard runs. The Blue Devils ran for 352 yards on 44 carries (8.0 yards per carryng football) vs. the 49ers.

Additionally, starting cornerback D. J. Crossen, a highly regarded transfer from Virginia Tech was lost on the game’s third play from scrimmage to a concussion. He is the concussion protocol and will not play. During the Furman game, starting linebackers Alex Fumbah in the first quarter and Jacob Thomas in the third quarter were ejected for targeting. Thomas will miss the first half against Duke.

NC A&T was 1 for 10 on third downs while Furman was 6 of 16. Furman capitalized on three of its four forays into A&T’s redzone. NC A&T was one of three. The Aggies were penalized ten times for 105 yards.

That’s not winning football,” said Washington.  “Those are areas we put a lot of concentration and focus on this week. We’re going to get better at the small things. Perhaps we didn’t preach that enough and get that message sent home to each and every one of us, players and coaches. But we sure did that this week.”