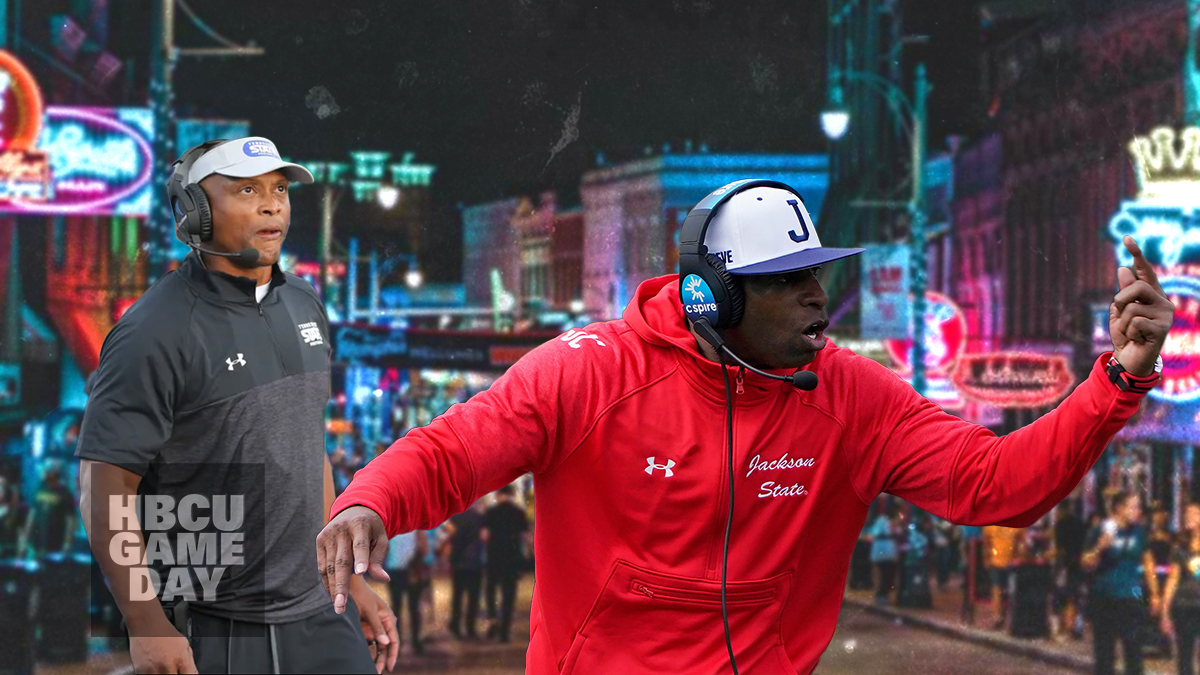 The 32nd edition of the Southern Heritage Classic in Memphis promises another layer of anticipation as former NFL stars Deion Sanders (Jackson State) and Eddie George (Tennessee State) lead the teams into battle.

The Southern Heritage Classic kicks off with its 32nd edition at the Liberty Bowl in Memphis Saturday evening pitting historic HBCU powers and rivals Jackson State against Tennessee State.

But the game, for all its past glory, has never had a match up like this year’s. That’s because this contest will pit former NFL greats turned HBCU head coaches in Deion “Coach Prime” Sanders in his second season at Jackson State vs. new Tennessee State head coach Eddie George.

It’s the featured match-up in Week 2 of the 2021 HBCU footbal season.

Here’s the basics of what you need to know:

“You can’t even measure it,” SHC founder Fred Jones Jr. said this week of the hype surrounding this year’s game. “From the time Deion was named the coach at JSU and Eddie was named the coach at TSU, it’s just continued to go up, up, up. It’s been really exciting to watch it go from a local level, to a regional level, to a national level because of these two personalities that are head coaches at the schools.”

Last year‘s SHC was cancelled because of the COVID-19 pandemic. The 2018 game was halted because of inclement weather (lightning). Jones couldn’t ask for a better re-start to the rivalry that has seen the same two teams battle every year except two since 1990. Mississippi Valley State faced TSU in 1991 and Grambling faced TSU in 1993.

The first edition of Jackson State 2.0, the Tigers’ second year under Sanders, had a somewhat successful launch last week. The Tigers nudged out Florida A&M 7-6 in Sunday’s Orange Blossom Classic in Miami. It was an outcome leaving as many questions as answers.

Like, how good is the coach’s son Shedeur, JSU’s freshman quarterbackwho threw 24 times for 221 yards without a pick vs. FAMU but coughed up two fumbles and could only get JSU into the end zone once?

“He played aight,” said the father of his talented son.

What about this team not being a ‘regular’ SWAC team as Shedeur opined in the preseason? What was special about them Sunday? FAMU battled them toe-to-toe. And what about all the Div. I transfers that were supposed to make such a difference? Where and who were they last Sunday?

The defense was stellar vs. FAMU, constantly pressuring the quarterback and making bone-jarring hits. The other Sanders son, Shilo, a transfer safety from South Carolina, was particularly effective registering seven tackles, one for a 5-yard loss.

Yes, it was a good win for Jackson State over a good FAMU squad but after Sanders’ team’s performance, those questions are still out there.

Pope started, Hickbottom played most of the second quarter and Bryant came in late in the second quarter and finished the game. The three combined to complete just 13 passes in 24 attempts for 118 yards. Hickbottom was likely the most effective completing 8 of 10 passes for 65 yards but Bryant led them to their only touchdown in the third quarter.

Who will the TSU brass start and play this week?

Most concerning is that TSU committed 8 offensive penalties, six of them delay-of-game infractions on an offense coordinated by former NFL head coach Hue Jackson. That’s a concern.

“A lot of the things that cost us the game are definitely correctable,” George said after the game. “We will keep our head down and keep going.”

Neither team ran the ball well last week. TSU ran for 112 yards on 30 carries (3.7 yards per carry) while JSU was limited to just 71 yards on 36 carries (2.0 ypc.). Neither of these grizzled gridiron pros will be happy with those numbers.

Expect TSU to feed its preseason all-OVC stud running back Devon Starling (18 carries, 88 yards) more. Ditto for JSU and 225-pound power back Peyton Pickett (15 car., 62 yds.) but expect Sanders to mix in more totes for the much quicker Santee Marshall (5-9, 170).

The biggest question is how the Heisman Trophy winner (George) and football Hall of Famer (Sanders) get their teams to respond after subpar performances.