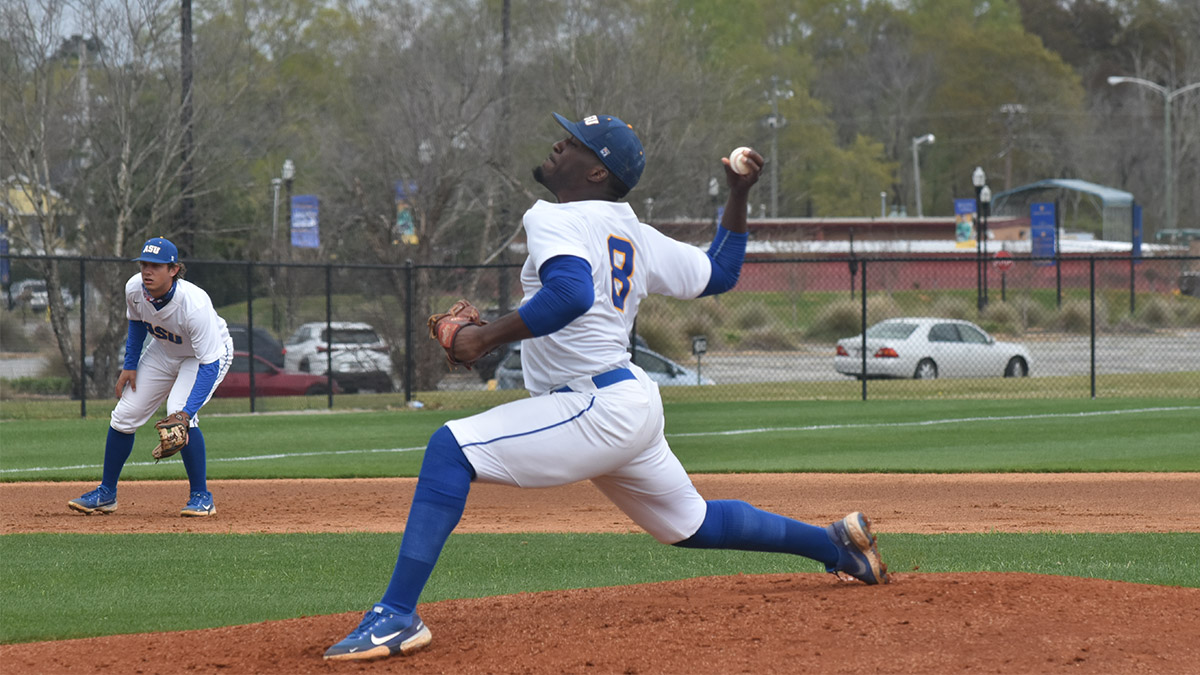 “As far as I can remember, this is definitely a dream come true for me.”

When you devote yourself to hard work and dedication, your dreams are more likely to happen. That’s the case for Albany State University pitcher Malik Barrington.

“As far as I can remember,” said Barrington, “this is definitely a dream come true for me.”

Every time he was asked, “what would you like to be when you grow up?” he always said he wanted to be a professional baseball player.

Last month, his dream became a reality when he signed as a free agent to the Minnesota Twins.

He told HBCU Gameday, “I’ve been playing baseball since I was about four years old, and I tried other sports, but baseball was always my first love.”

A transfer student from Tallahassee Community College, Barrington, got the opportunity to experience being an HBCU student when he became a Golden Ram.

From an HBCU Community

With his house located on Kings Road, the Jacksonville, Fla. native grew up around the culture as the Edward Waters campus was right down the street from where he lived. In addition, several members of his family, including his parents, aunts, and other relatives, attended and graduated from the Historically Black institution.

He added, “the people, the friends that I made. It’s just amazing [at Albany State]. I couldn’t have asked for a better college experience.”

Walking onto a new team made him nervous, but his coaches and teammates made it a “smooth transition” for him.

“Ever since my first visit, [the coaches] showed that they were 100 percent confident in me to be a successful player.”

He said in a statement that Barrington “worked extremely hard on his development every day for the last three years” and cannot wait to see what the future holds for him.

Barrington said that Hemmings and assistant coach Grant Reynolds are “huge mentors” in his life, and both were monumental in his development as a player and as a man.

Over his collegiate career, Barrington played in 27 games and allowed only 116 hits, 72 runs, and struck out 168 batters faced.

This season, Barrington joined the United Shore Professional Baseball League (USPBL) and became a relief pitcher for The Utica (Mich.) Unicorns to kickstart his professional career.   His coach gathered him and his teammates, informed them that scouts from many Major League Baseball clubs were watching them play, and announced that Barrington received an offer to be a free agent with the Twins.

HIs number one fan

While reflecting on the moments when he told his family, Barrington said, “they were all screaming.”

But he was most emotional when he told the news to his number one fan, his Aunt Brenda.

“She always prayed for me to be successful and pursue my dreams, and once I told her that my dream has come true, she was in tears, and that’s when my tears started coming down too.”

When he accomplishes his dream in the majors, Barrington will be in a small number of African Americans to play in the MLB.

Last year, an analysis done by USA Today Sports revealed that 7.8 percent of the players on the opening-day roster were Black, and three teams– the Arizona Diamondbacks, Kansas City Royals, and Tampa Bay Rays– had zero.

“There wasn’t always a team full of African Americans that I played on,” said Barrington. “I think that helped me in life to see different cultures and different people, and I’ve always got along, [with my teammates] no matter their race, or where they come from.”

He mentioned that he sees no pressure being a minority in the game that he loves and that, “I just want to take advantage of that opportunity because we’re all here on the same level at this point now.”

Fix it and they will come

Giving back is essential for Barrington, and he plans to do that by repairing neglected baseball fields in predominately Black communities.

He said his neighborhood didn’t have nice ones for him and his team to play on, and the conditions of the fields discourage kids from playing the game.

“It takes a small contribution from people in the community or former players or current players like myself to help build up the fields and make it look nice. Then, if it’s presentable, the kids will want to go play on that field, and that’ll bring the game back to the community.”

Malik is not wasting any time making an impression in the Twins’ Florida Complex League (FCL).

In his first game appearance this season, he came in as a relief pitcher and pitched three innings, netting six strikeouts, one hit, no walks, and earning the game-winning save.

As the season is winding down, Barrington has two more classes to complete this fall semester at Albany State and will be graduating with a Bachelor’s in Business Management.