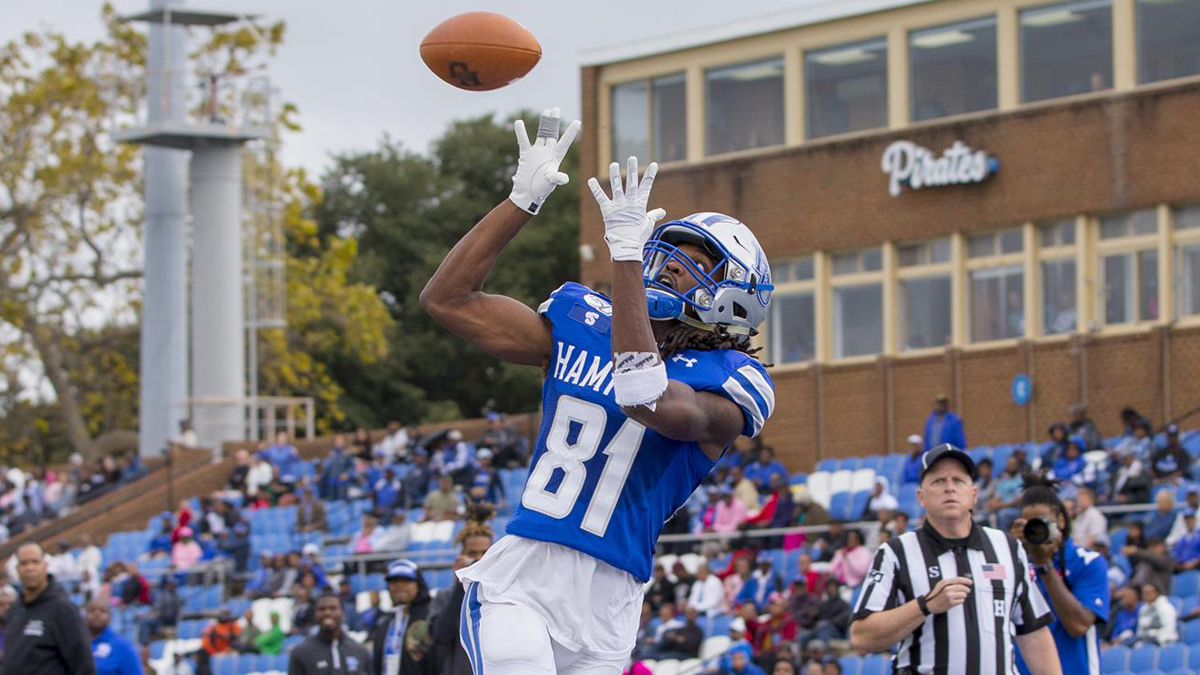 Virginia Union came to Hampton hoping for another win over its Division I rival. It got close, but no cigar.

HAMPTON, Va. – Hitting the field for the first time since Nov. 23, 2019, the Hampton Pirates got 143 yards from Darran Butts and 136 from Elijah Burris as they defeated Virginia Union 42-28 on Saturday night.

Hampton got on the board with a pair of first quarter touchdowns as Jett Duffey connected with Jadakis Bonds on an 11-yard slant pass to cap off a 13-play, 83-yard drive and put the Pirates up 7-0.

After forcing a Panther punt, the next scoring drive was a quickie as Butts broke several tackles and outraced the secondary to the end zone for an 85-yard score and a 13-0 Hampton lead with 5:47 left in the opening quarter.

Virginia Union found its stride in the second quarter and put up a pair of touchdowns as Domantay Rhem finished off a 12-play, 75-yard drive with a one-yard plunge on the opening play of the second quarter.  The Panthers took a 14-13 lead at the 3:42 mark as Khalid Morris connected with Rodney McKay on a five-yard pass.

The third quarter saw each team put up a touchdown as Burris got the first of his three touchdowns on a two-yard scamper on the opening possession of the quarter.  A two-point conversion pass from Duffey to James Stanley put Hampton up 21-14 at the 12:17 mark.

The Panthers answered taking advantage of a short field after a punt with a trick play as wide receiver Jaden Reavis connected with Charles Hall on a 39-yard quick strike to tie the game at 21-all with 8:50 left.

In the fourth, Hampton took another one score lead as Duffey found KeyRon Catlett on an 18-yard touchdown pass with 12:42 left and a 28-21 Pirate advantage.

The Panthers responded again covering 75 yards in 94 seconds with Morris finding Desmond Smith for the last 40 with a scoring strike to tie the game at 28 at the 11:08 mark.

Burris set up the next Hampton score with a 51-yard kickoff return down to the VUU 29.  A 24-yard completion to Romon Copeland got the Pirates down to the four, before Burris finished it with a one-yard score and a 35-28 lead with 9:05 remaining.

He completed his trifecta of touchdowns as Hampton with consecutive 30-yard runs.  After starting on the Hampton four, a pair of seven-yard Will Robinson runs sandwiched a 22-yard Duffey-to-Bonds connection as Hampton clawed out to the 40.  Burris’ first 30-yard run put the ball at the Virginia Union 30 and he closed out the 96-yard drive with a 30-yard burst with 3:29 left.

Hampton amassed 611 yards of total offense with 369 on the ground and 242 in the air.  Bonds was the leading receiver with seven for 62 yards, while Robinson grinded out 62 yards on 12 carries.

The Pirates defense forced three turnovers with Caleb Brown recording a pair of interceptions.  The last of which killed the Panthers hopes as he snared one to end their final possession at the Hampton 35.  DeAndre Faulk had seven tackles, while Donald Smith had six and two pass breakups.  KeShaun Moore and Andy Matthews each had five tackles.