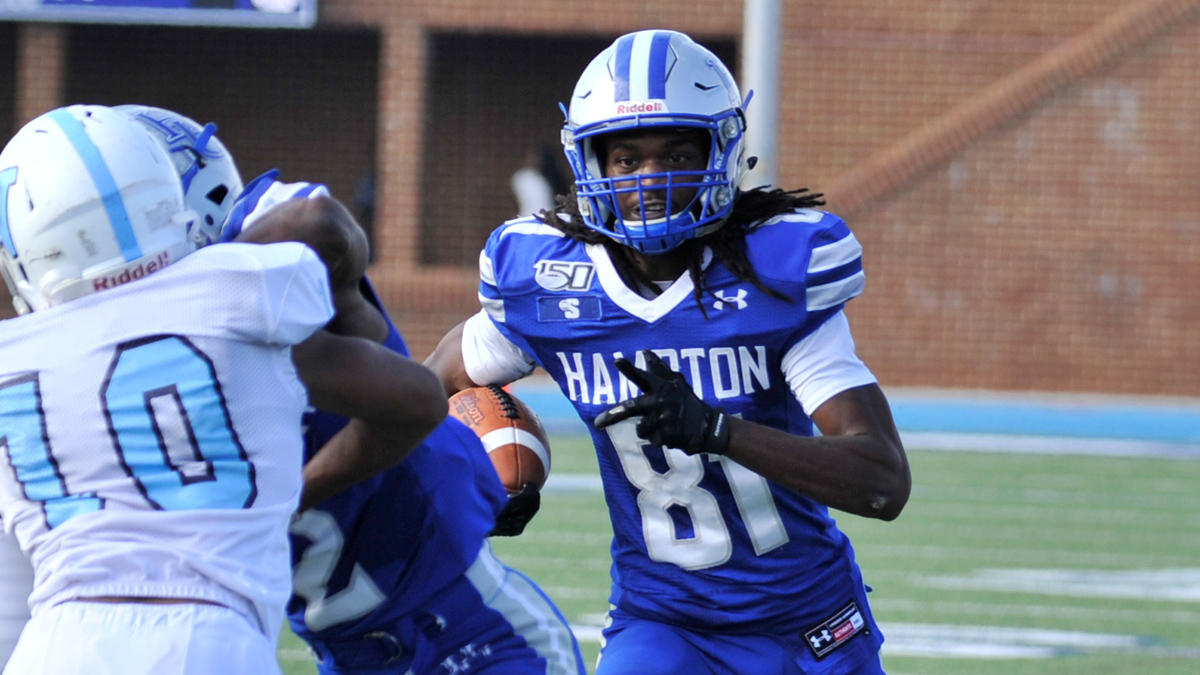 Jadakis Bonds has the game to match standout name

Jadakis Bonds would be a name to remember regardless of how good he was. But make no mistake, he’s got plenty of game.

It’s inescapable when you talk to Jadakis Bonds. You have to ask him about his name, even if you don’t want to.

“If I’m not mistaken, I think my aunt named me,” My aunt, she gave me the name Jadakis. I feel like — ain’t too many people named Jadakis.”

Sure enough, the Hampton University star wide receiver’s aunt convinced his mother Direatha Rodgers to go with the name of the legendary rapper.

“Yes, I was a real big fan of the Lox and really liked that name,” she said. “I just suggested it, and she was all for it. I made sure he only had one “S” not to be confused with the rapper.”

Having lived with the name all of his life, he just sees it as another way to stand out.

If there is one thing Jadakis Bonds is good at, it is taking whatever is thrown at him and running with it.

Bonds is coming off a 2019 season in which he was one of the best receivers in FCS and HBCU football. He caught 70 passes for 943 yards and 15 touchdowns during his sophomore season. His touchdown total was one off of the Big South Conference record. It was a huge step up from his freshman season in 2018 when he caught just seven passes.

That leap up may have surprised the outside world, but his head coach Robert Prunty knew what kind of player he was bringing with him when he arrived at Hampton in 2018.

Bonds story starts out in tiny Williamston, NC. It’s a small town in northeastern North Carolina, on the banks of the Roanoke River. Less than 6,000 people live there.

“You don’t really find too much out there. But that’s my home,” Bonds told HBCU Gameday at Big South Media Day. “I love the city. I put on for the city. That’s first and foremost. I’m really trying to put the city on the map.”

Bonds started doing so back at Riverside High School. A two-sport star, he was a three-star recruit in football — drawing interest from ACC schools and an offer from West Virginia as well as East Carolina. He eventually committed to ECU, but his grades kept him from landing there.

That’s where Prunty comes in. He was working at ECU as a defensive coordinator before being hired by Hampton following the 2017 season. He reached out and Bonds became a Hampton Pirate.

“That’s really just a loyal person. Not only as a coach but just as a man,” Bonds said when asked about his bond with Prunty. “Coach Prunty stood by my side regardless of the situation. Regardless of what was going on — what I had going on — he stuck right beside me. Never turned his back on me. So that’s why I still — to this day — got so much love for him.”

Since arriving at Hampton, Bonds has turned his academic career around.

“I’m a big believer in learning from your mistakes. So I feel like my mistakes back then is what made me the man I am today,” he said. “I was able to learn from them and overcome. I had a whole bunch of adversity to overcome, I was able to maintain my focus and strive for greatness.”

That adversity extended beyond the classroom and the football field. He says he experienced some personal losses, including family and loved ones, that he used as motivation to keep pushing.

“I took some rough losses,” he said.” I had death in the family. One of my best friends— still to this day he motivates me.”

After such a big 2019 season, Bonds and his teammates were looking forward to the next season. And then 2020 did what 2020 did. Hampton was one of the first FCS programs to decide to sit out the 2020 season. With Bonds being the player that he was and the transfer portal allowing players freedom of movement, Prunty knows he’s lucky to still have him at Hampton.

“He could have went to the transfer portal or he could have left the program,” Prunty said. “He was an All-American two years ago. He’s in great shape. He came back close to 200 pounds. Jadakis just continues to improve.”

For Jadakis, it was a pretty simple decision. He just gave back what he was given and stayed down with his teammates.

“The same way he was loyal to me, I was loyal to them,” he said. “Then again, my brothers (teammates)— it’s nothing like being around a bunch of brothers who love the game as much as you love the game. Show as much love and loyalty as you show. So I just knew, I had to come back to ‘em.”

And make no mistake about it, Jadakis Bonds and Hampton will have a chip on their shoulder. Hampton was picked to finish next to last in the Big South. Bonds, was somehow left off the Black College Football Hall of Fame’s Player of the Year Watchlist earlier this week.

No doubt, that will add fuel to the fire for Bonds and his teammates. But he feels like the work he and team put in will show on the field this fall.

“The amount of work I put in — it’s amazing. I work day and night,” he said. ‘I just try to stay as humble as I can. Control what I can control, and I let the rest play out.”

Jadakis Bonds has the game to match standout name