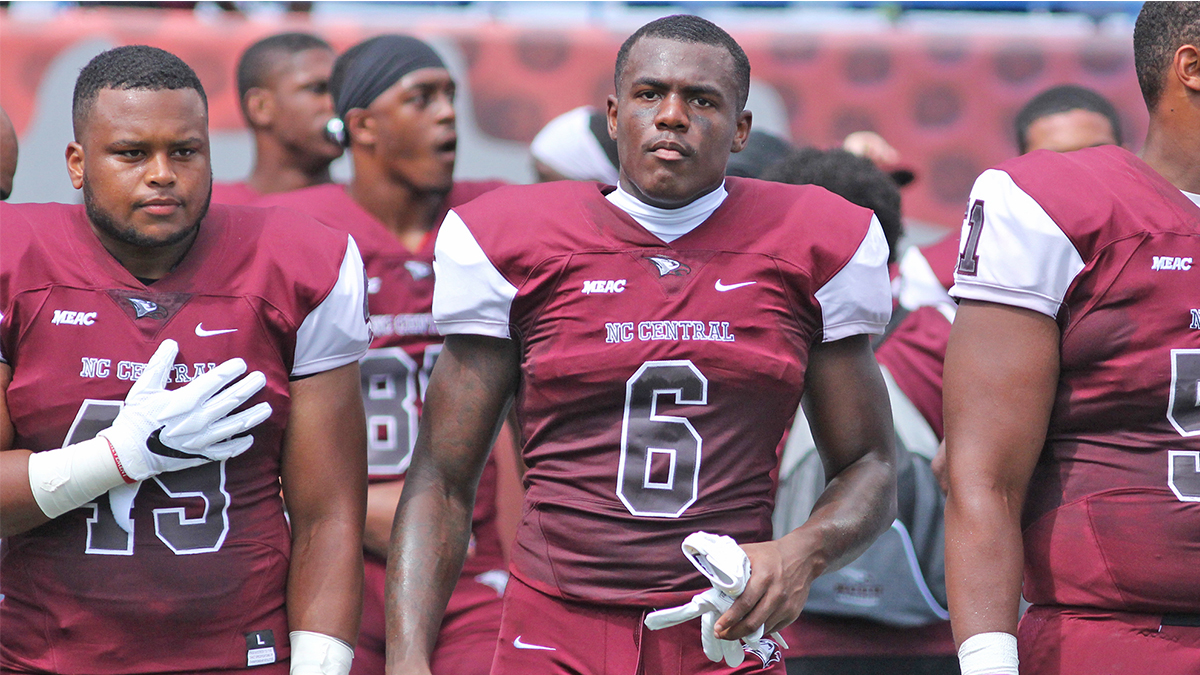 NCCU refocused and regrouped, ready for 2021

After a rough end to the 2019 season and opting out in 2020, the Eagles have put in the work to change the culture and compete for a championship, says third-year head coach Trei Oliver.

Third-year NCCU head football coach Trei Oliver would like nothing better than to erase the sting of the end of the 2019 season, his first year on the job.

The proud Eagles finished 4-8 overall, 3-5 in the Mid Eastern Athletic Conference, losing their last three games. After a promising 3-2 start in conference play, they were shutout in their final two games by a combined score of 78-0 to teams that shared the league championship.

They fell at home to South Carolina State, 24-0, before falling even harder on the road to fierce I-40 rival North Carolina A&T, 54-0. The Eagles only mustered nine yards of total offense in the loss to A&T.

Oliver and his team have had a year to regroup after sitting out over the past year because of the COVID-19 pandemic.

“You’re going to see a much improved football team, and I emphasize the word ‘team,’” Oliver explained during the July 30 MEAC Media Day in Norfolk, Va. “During the COVID break or pandemic, we spent a lot of time with continuity, team-building exercises and things of that nature. I think the guys have jelled and come a lot closer as a team.”

“We have changed the culture,” Oliver said on the Eagles’ website. “I truly expect to be in the championship mix when the smoke clears at the end of the season.”

“We’re not locked in with starters right now,” said Oliver. “We’re going to compete all through camp and we’ll assess and rate them on a daily basis. We’ll evaluate those guys weekly and make a decision about who the starters will be.”

League head coaches and SIDs think the Eagles have the pieces to compete for a title. They picked NCCU third in the preseason voting behind South Carolina State and Norfolk State. Eight Eagles were selected to preseason all-conference teams.

Redshirt senior running back Isaiah Totten, a three-time all-MEAC selection, will certainly figure prominently in the offensive scheme. The 5-9, 195-pound speedster has rushed for 2,122 yards while averaging 5.0 yards per carry in his three years at NCCU. He has a unique combination of speed, quickness and power.

Davius “Pee Wee” Richard held up admirably (2,021 passing yards, 12 TDs, 9 ints.) after being thrust into the starting quarterback’s job one game into his 2019 freshman season. He returns with a better grasp of the playbook and overall feel for the game, Oliver says. Freshmen Walker Harris and Quest Powell will compete with Richard.

“Offensively, we’re very explosive at the skill positions,” Oliver said. “We’ll have a lot of competition there. We’ve got a bunch of good running backs. Several of them could start. We’re loaded at receiver and have three quarterbacks that we’re comfortable with. Up front, offensive line-wise, we have a lot more depth, which was well needed.”

The secondary is the strength of the defense. Safeties Stephen Stokes (1st team) and Manny Smith (2nd team) were selected to the preseason all-MEAC teams. Cornerback Brandon Codrington, the league’s top kickoff returner (18.8 ypr., 1 TD), was selected a first teamer at that position.

The Eagles will feature a nice combination of returning playmakers on the line. Defensive end Jesse Malit (6-3, 225), the most consistent pass rusher, was voted to the second team. Rangy teammates Chidi Okonya (6-5), Deontrae Brown (6-6) and Tre Turner (6-5) are also at the position. Colby Warrior (6-3, 230) is a transfer from Morgan State.

“Defensively, we’re definitely solid,” said Oliver. “I like the depth up front where it starts in the trenches. On the back end we have experience and quality reps.”

The Eagles open the season in the SWAC/MEAC Challenge on August 28 in Atlanta facing Alcorn State. The Braves, who also sat out the spring season, had won three of the last five SWAC championships. Oliver doesn’t see them as the Eagles’ first opponent.

“Our first opponent is COVID,” said Oliver of the virus that bedeviled everyone including his Eagles over the past 18 months and is threatening again. “Once we get past that then we’ve got Alcorn.”

Non-conference games follow at Marshall (Sept. 11) and with former rivals Winston-Salem State (at home, Sept. 18) and on the road at North Carolina A&T (Sept. 25). Out-of-conference games continue at another SWAC opponent, Mississippi Valley State on Oct. 2 before a final date at home vs. Tennessee Tech on Oct. 9

NCCU refocused and regrouped, ready for 2021