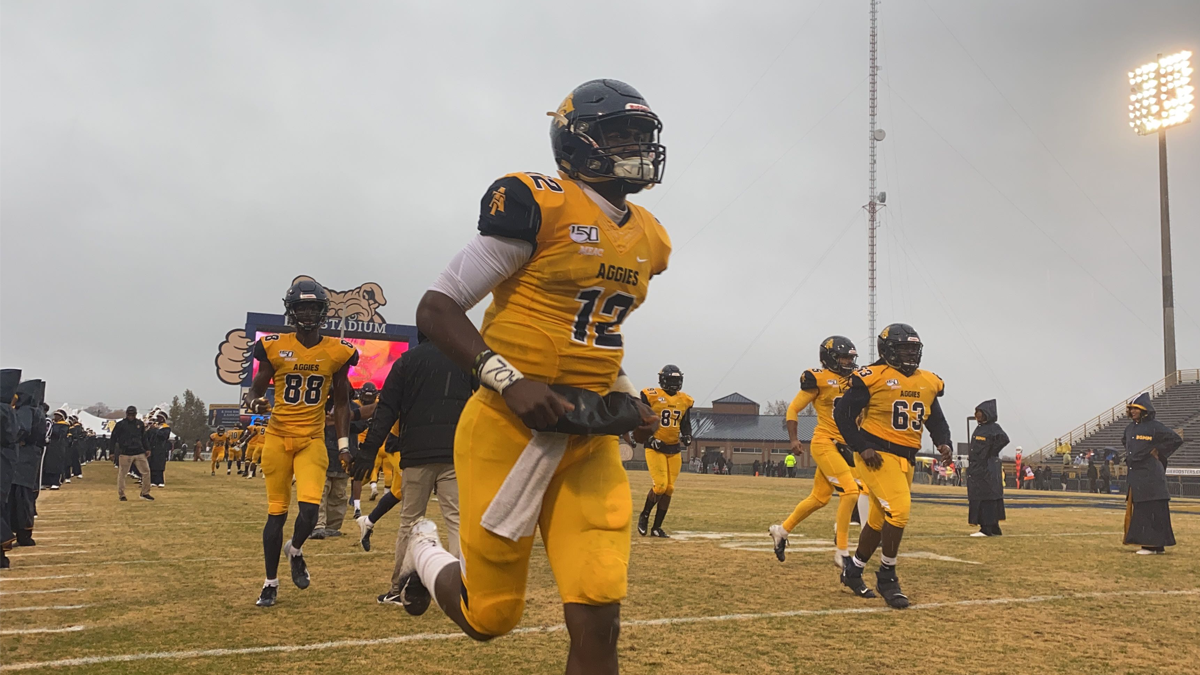 GREENSBORO–Saturday began as a typical MEAC season finale, half of the conference was in the running for a piece of first place. North Carolina A&T (8-3, 6-2) quickly slammed the door on any potential drama with a 54-0 pummelling of rival North Carolina Central (4-8, 3-5) at home. The 54 points were the most ever scored by NCAT in the 91-year history of the Aggie Eagle Classic.

The win ensured an outright conference championship for the Aggies and a third straight trip to the Celebration Bowl. NCAT has won the last two Celebration Bowl titles and three of the four since the game was created in 2015.

The game was never close as the Aggies were on top 16-0 after the first quarter. Elijah Bell exploded for a 68-yard touchdown on the second play from scrimmage that set the tone for the rest of the afternoon.

The lead didn’t seem unsurmountable heading into the second quarter but Jah-Maine Martin turned in another soul-crushing run. Martin ran 55-yards virtually untouched for a touchdown and the onslaught was on as the lead swelled to 23-0.

The Aggie defense might have been the star of the game despite the bushel of points scored by the offense. NCAT held North Carolina Central to nine yards of total offense for the entire game. NCCU had 15 passing yards and negative six yards rushing. On the other side, NCAT finished with 520 total yards of offense. Staying true to the nature of the rivalry the blows on social media were just as sharp as the ones on the football field.

Drama in Norfolk is for naught

But anyone with an internet connection knew all afternoon long that a Celebration Bowl berth was no longer in the cards. South Carolina State now hopes to continue its season in the FCS playoffs, time will tell.

Meanwhile, North Carolina A&T will await the winner of the SWAC Championship game to determine its opponent in the Celebration Bowl. As it currently stands the Aggies could potentially face Alcorn State, Grambling or Southern University. The winner of the Bayou Classic The Aggies will have nearly a month to rest and prepare, the Celebration Bowl won’t be played until December 21 in Atlanta, GA.