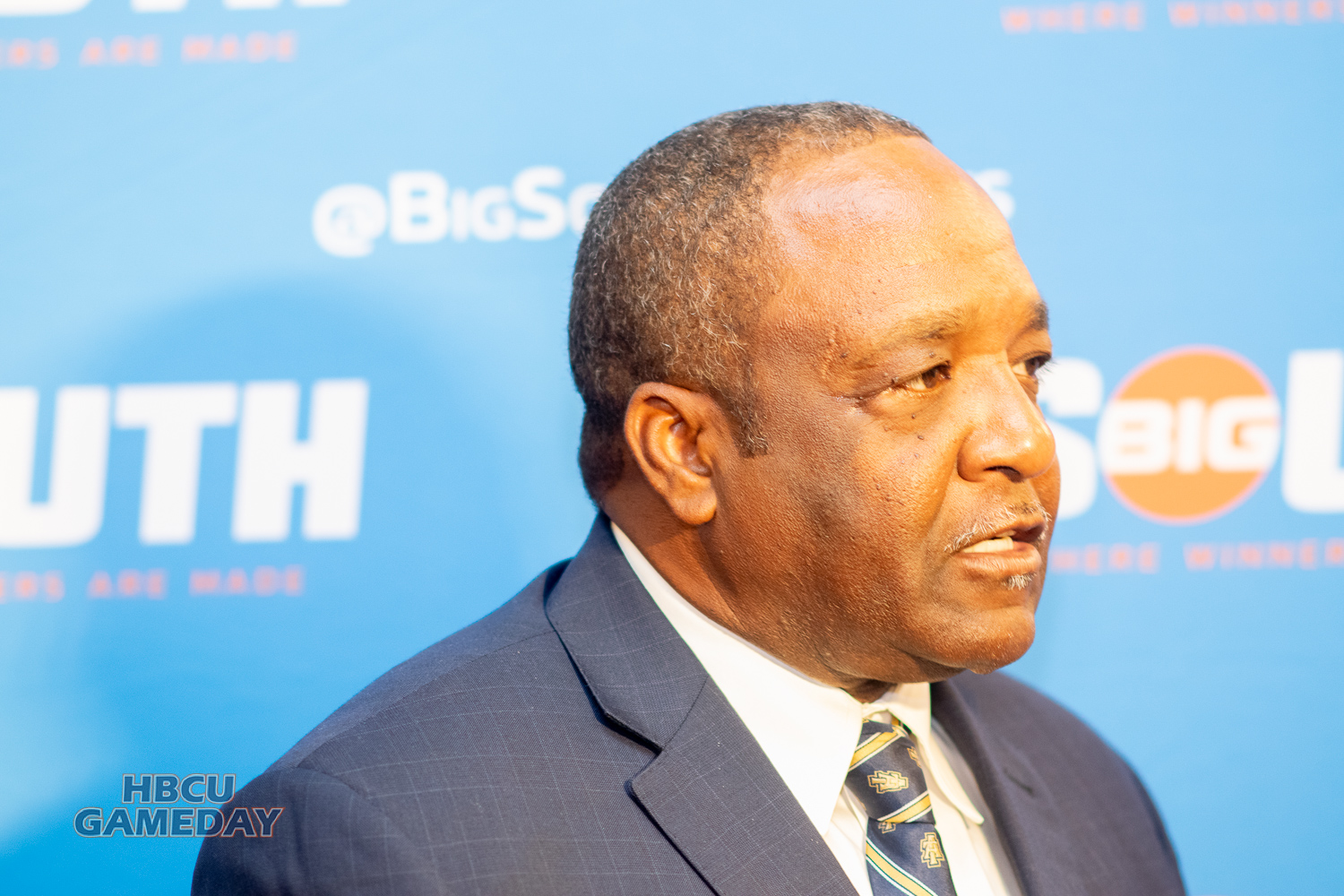 NC A&T ready to prove itself in the Big South

The Aggies are not the ‘big dogs’ of their new league, the Big South Conference. Two-time defending champion Monmouth is, for now.

The Mississippi Valley State product was challenged regularly during four years (1982-1985) in the NFL playing cornerback for the Pittsburgh Steelers. He had six interceptions in 1984.

When he took over the NC A&T program from Rod Broadway in 2018 after eight years as Broadway’s defensive coordinator and associate head coach, it was coming off a perfect 12-0 season including a Mid-Eastern Athletic Conference championship and Celebration Bowl win. He answered that challenge in his first two seasons (2018 and 2019) posting back-to-back MEAC titles and Celebration Bowl wins.

After a challenging sit-out season in the fall of 2020 and spring of 2021 because of COVID-19 issues, Washington and his squad are facing another challenge as the Aggies move from the Mid Eastern Athletic Conference to the Big South Conference.

NC A&T not the ‘big dog’ in the Big South

The Aggies are no longer the literal ‘big dog’ as they were in the MEAC.

They come into their inaugural Big South season rated only third in the preseason behind two-time defending champion Monmouth and Kennesaw State. That’s the result of voting in the preseason by Big South head coaches and sports information directors released last week at the league’s media day in Charlotte. The Aggies will also be facing a slew of new opponents.

Washington, whose team was scheduled to challenge eight-time FCS champion North Dakota State in the fall of 2020 before the pandemic halted that schedule, is unfazed.

“Very little, honestly,” said Washington of how much he sees the new conference and the new opponents as causes for worry. “It’s always going to be about what we do. We’re going to play our brand of football no matter who we’re playing or where we’re playing. As long as the field is 100 yards long and 53.4 (yards) going across, and has stripes, we’re good.”

But getting film on these new opponents is a challenge, said Washington.

“We have not had the opportunities we have had in the past,” he said. “They were willing to exchange film from two years ago, but for what purpose. Fortunately, we don’t start conference play until we have three ballgames under our belts so we will exchange those games prior to playing (Big South teams).”

“There are so many variations,” he said in terms of style of play in the Big South. “Kennesaw (State) is a downhill, straight-at-you, veer, triple-option type team. Then you’ve got Monmouth that’s going to spread it out. They’ve got an athletic offensive line that protects a very good quarterback (sophomore Tony Muskett). Everybody has their own brand of ball.”

One of the biggest challenges has been removing the MEAC decal and putting the Big South decal on uniforms.

“That’s been more daunting than I imagined,” said Washington.

Speaking of challenges, the A&T 2021 schedule would definitely fit the title. It opens (Sat., Sept. 4) on the road at Furman out of the Southern Conference, then goes to Duke (Fri., Sept. 10) of the ACC. After a week off, the Aggies come home (Sat., Sept. 25) to face former MEAC and now non-conference rival North Carolina Central.

Conference play begins with home dates on Oct. 2 vs. Robert Morris and Oct. 9 against North Alabama. The North Alabama game does not count in the Big South standings as UNA is the midst of transitioning to Div I and the A-Sun conference.

A&T then travels to take on Kennesaw State and its triple-option offense on Oct. 16 and stays on the road the following week visiting former MEAC member Hampton (Oct. 23).

One date that will certainly be circled for the NC A&T faithful is the Oct. 30 homecoming. That’s not just because it’s their aptly-named GHOE (the Greatest Homecoming on Earth), but it will matchup the Aggies with Monmouth. The Hawks fell to eventual FCS champion Sam Houston State 21-15 in the first round of the playoffs in the spring. They had 15 of the 30 players selected preseason all-Big South.

Washington was asked how he and his team handled sitting out in the fall 2020 and spring 2021.

“Me personally, not very well, but I thought the team handled it extremely well,” he said. “I’ll tell you what I was most pleased with. When we made the decision, we all stuck by the decision, even if we didn’t agree with it. You know, that spoke volumes to me. Not one person said anything. That meant so much to me that those kids said whatever decision we make is final and we’re going to live with it. And they did just that.”

Watching other teams play was tough however, Washington said. Not playing was tough.

Like many other teams, NC A&T retained nearly all of their players despite the challenges of the pandemic.

“Why would you want to leave A&T now,” Washington mused. “No, we’re returning 14 seniors who all have a degree, that could have moved on but decided to come back. We’re in a good place in terms of where we are now.”

Washington also doesn’t think he and his players are going to miss facing MEAC opponents.

“I think after two years they don’t care who they play. They just want to get out there and play. And I feel the same way.”

NC A&T ready to prove itself in the Big South