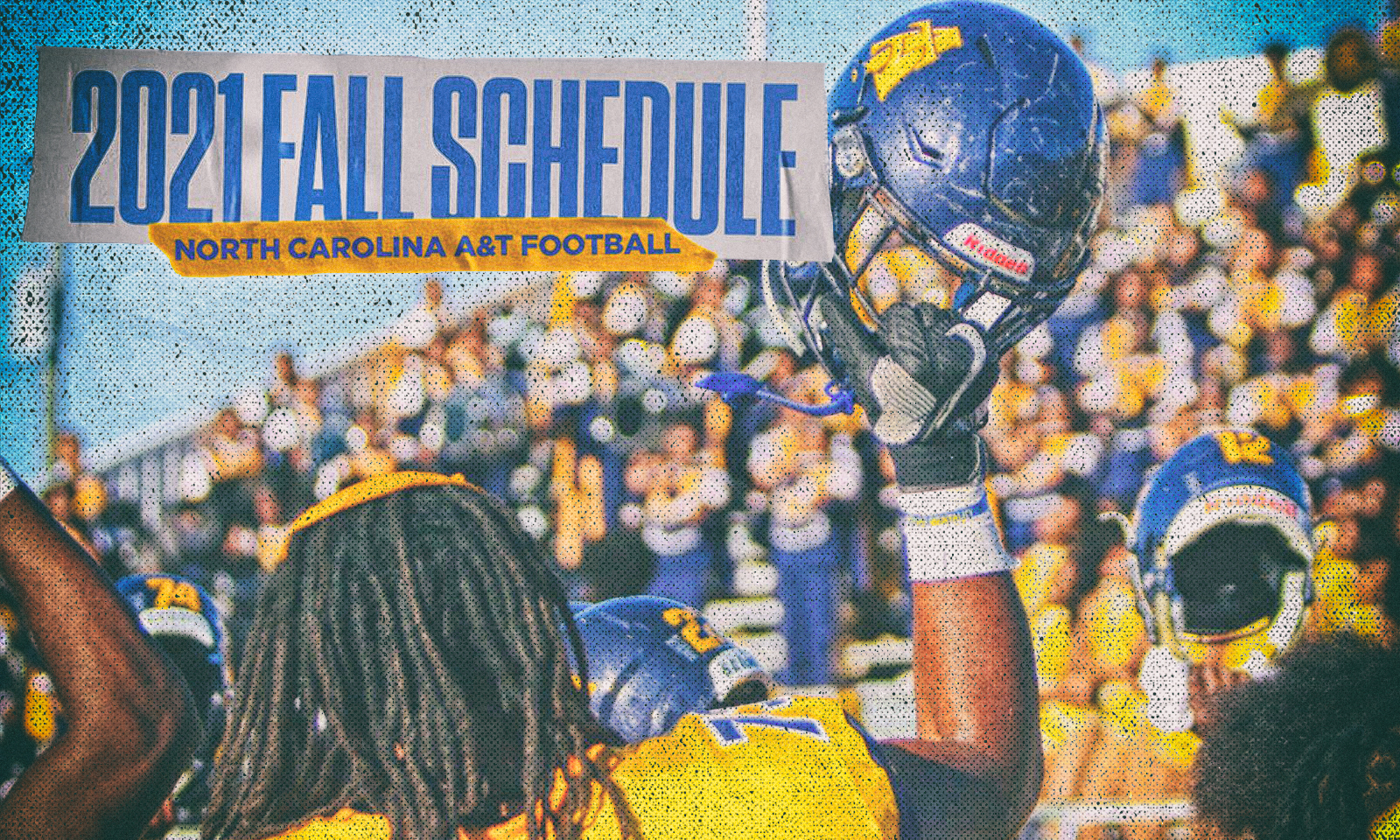 The Aggies will enter their first season as a Big South Conference member as they end a 50-year association with the Mid-Eastern Athletic Conference.

EAST GREENSBORO – NC A&T has released its 2021 football schedule that will include a mix of old and new. The Aggies will play some of their traditional rivals, but many of their 2021 games will be first-time encounters against their opponents as they enter a new league.

The Aggies, who have not played a competitive football game since Dec. 19, 2019, because of the coronavirus pandemic, will enter their first season as a Big South Conference member as they end a 50-year association with the Mid-Eastern Athletic Conference (MEAC).

Aggie fans saw their beloved football team play was in the Celebration Bowl as they rolled over Alcorn State in an offensive onslaught, 64-44, at Mercedes Benz Stadium in Atlanta. The Aggies have had significant turnover since, but the foundation remains strong as they head into the fall season.

NC A&T begins its fall season with a contest at Furman on Sept. 4. The Paladins and the Aggies will meet for the first time on the gridiron. The Aggies have won their last seven season-openers, with their previous season-opening loss coming against another South Carolina school, Coastal Carolina, in 2012. The last time the Aggies played a SoCon school, they defeated Appalachian State 24-21 in 2013.

A week later, the Aggies will face the Atlantic Coast Conference’s (ACC) Duke Blue Devils in Durham for the second time in three seasons. Duke and N.C. A&T scheduled the game for Saturday, Sept. 11, but talks exist about moving the game to a Friday night contest at Wallace Wade Stadium.

In the last contest between the two teams, the Aggies held 3-0 and 10-7 leads before losing 45-13 at Wallace Wade. Running back Jah-Maine Martin, who is expected back in the fall, had a 66-yard touchdown run in the game.

After taking a week off, the Aggies will the traditional rival to top all other traditional competitors as the Eagles of North Carolina Central University play a visit to Truist Stadium for N.C. A&T’s home opener on Sept. 25. The Aggies have won their last three matchups against their longtime chief rival in a convincing manner. N.C. A&T has outscored the Eagles 123-10 over those three contests, including 99-0 in the last two meetings.

The Sept. 25 game will mark the first in what will be a 10-game series between the two largest historically black universities in the state of North Carolina signed to assure a rivalry that will turn 100-years old in 2024 will continue through the next decade.

Play in the Big South will commence on Oct. 2 for the Aggies when they welcome to Truist Stadium for the first time, the Robert Morris Colonials. RMU stands at 0-3 overall and 0-2 in the Big South this spring. Like N.C. A&T, RMU will play their first full fall season as a Big South member in 2021.

North Alabama (UNA) comes to Truist Stadium on Oct. 9 to face the Aggies for the first time. The UNA Lions are 0-4 this spring, and at the time of this release, they have yet to play a Big South opponent this spring. In 2019, they were 4-7 overall.

One of N.C. A&T’s traditional rivals appear on the schedule next in the Hampton Pirates on Oct. 23. The Pirates announced their intentions to join the Big South in 2018 and played their first full season as a football school in the league in 2019. Before that occurred, the Aggies and the Pirates played each other as fierce opponents in the MEAC from 1995-2018. Before they were MEAC rivals, they were rivals in the Central Intercollegiate Athletic Association (CIAA) from 1925-1970.

N.C. A&T returns home to play another Big South power in the Monmouth Hawks on Oct. 30 for the Greatest Homecoming On Earth. The Aggies have won nine straight homecoming games. The Hawks will represent the Big South in the playoffs this spring after posting a 3-0 mark in the league. The Hawks are 17-2 in the Big South over the past four seasons.

Charleston Southern appears on the schedule next as the Aggies travel to South Carolina on Nov. 6. The Buccaneers and the Aggies played one another in 2019, a 27-21 Aggies victory. Martin had 299 yards rushing in the win. The Bucs went 2-2 this spring. They were 6-6 overall and 4-2 in the conference in 2019.

Another traditional rival appears in the S.C. State Bulldogs. The Aggies and the Bulldogs fought in the MEAC for 50 years, but now the two longtime rivals will face each other as non-conference foes. The Bulldogs lead the series 33-22-2, but the Aggies have won the last five matchups.

The Aggies season finale is at Truist Stadium against the Gardner-Webb Runnin’ Bulldogs. GWU and N.C. A&T played each other in a two-game series in 2017 and ’18. The Aggies won both games, 45-3 and 45-6, respectively.