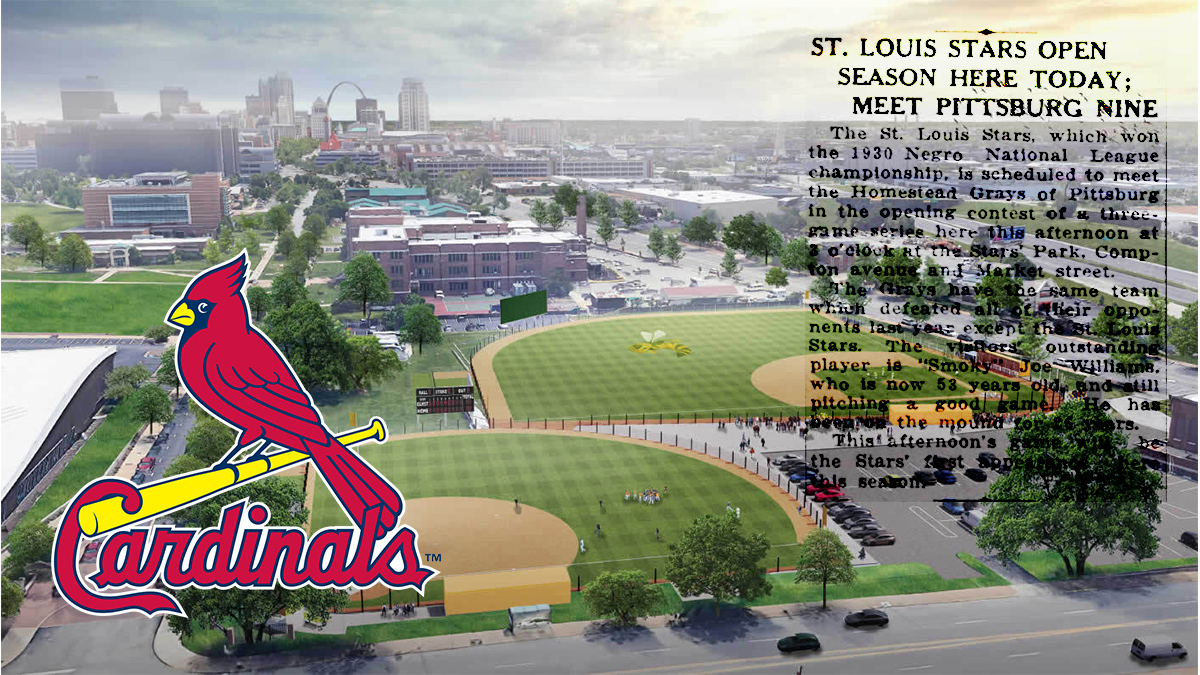 Harris-Stowe baseball will have a new-look home as the St. Louis Cardinals helped refurbish a stadium with a historic past.

The rain may have changed the complexion of the event, but it did little to take away from the historic nature of Friday’s festivities, nor did it make the star power present any less palpable.

The Cardinals — in conjunction with Cardinals Care and Harris-Stowe State University — unveiled Stars Park Field, refurbishing to vibrancy a venue that was inhabited by Negro Leagues champions and baseball Hall of Famers like James “Cool Papa” Bell. It is now used by the Harris-Stowe baseball program and local youth programs.

“Today means so much to the current and former players who have worked extremely hard and given their all to represent the Harris-Stowe baseball team over the years,” said Dajuan Griffin, a pitcher and four-year-lettered senior baseball player at Harris-Stowe. “This year, we were able to practice and compete on a field we were proud to call our home. … Thank you for giving historic Stars Park new life.”

From 1922-31, Stars Park Field was home to the St. Louis Stars, members of the Negro National League who were crowned champions thrice from 1928-31. Along with Bell, two other Hall of Famers called Stars Park Field their home: shortstop Willie “El Diablo” Wells and first baseman/outfielder George “Mule” Suttles.

Historically Black Harris-Stowe State University will continue to call this revamped ballpark home after a donation of $1.2 million that also funded the construction of a softball field, hundreds of seats, enclosed press boxes, enclosed NAIA-level dugouts and new scoreboards.

“Probably the thing that will give me most gratification on this project going forward is sometimes I’ll just grab lunch here in Midtown, and I always drive by Compton [Avenue] and Market [Street] and I see the kids practicing, and it’s just a wonderful feeling that we’ve made an impact,” added Cardinals president Bill DeWitt Jr., who was joined at the ceremony by Cardinals pitchers Jack Flaherty and Andrew Miller, as well as former Cardinals Scott Terry and Hall of Fame inductee Ted Simmons.

“And the fact that they are using this field every day, getting better at baseball, learning the skills and all the camaraderie that comes with it, that makes it worth every penny and all the hard work.”

The goal to dedicate Stars Park Field started in November 2018, when Michael Hall, Cardinals vice president of community relations and executive director of Cardinals Care, was made aware of a “modest” investment to improve the scoreboard at the ballpark.

Hall approached DeWitt, asking how the Cardinals could get involved in the reinvigoration of a site that’s nestled into a high-traffic area of St. Louis.

“We decided we wanted to invest more into this historic site,” Hall said.

Cardinals and HBCU worked together

That resulted in the $1.2 million injection, one that included a “six-figure investment” from Harris-Stowe. As blueprints were conceptualized, the university’s softball team voiced its concerns over the lack of a dedicated softball field. So it was added to the plans.

“[The] effort in completing this project has given our team a greater sense of pride and hope for the softball program this upcoming season,” said Remani Atuatasi, a member of the Harris-Stowe softball team. “We plan to honor the legacy of the great men who played on this very ground and leave a legacy for future Hornets to follow.”

Ground for the renovated fields was broken last year, the 100th anniversary of the Negro Leagues. Harris-Stowe student-athletes will look to continue the legacy of the Stars — one of winning, trailblazing and excellence.

“There’s a rich history of baseball and tradition in this town. Before our modern legends, many of them sitting with us today, … there were other stars in this town,” said Dr. Ray Doswell, a St. Louis native and vice president and curator of the Negro Leagues Baseball Museum in Kansas City.

“I am proud to celebrate the dedication of Stars Park Field, the site where the three-time champions of the Negro National League St. Louis Stars played so many years ago,” added Flaherty in a press release. “There is still work to be done, but it is important that we keep the legacy of the legendary athletes who played in the Negro Leagues alive for younger generations.”