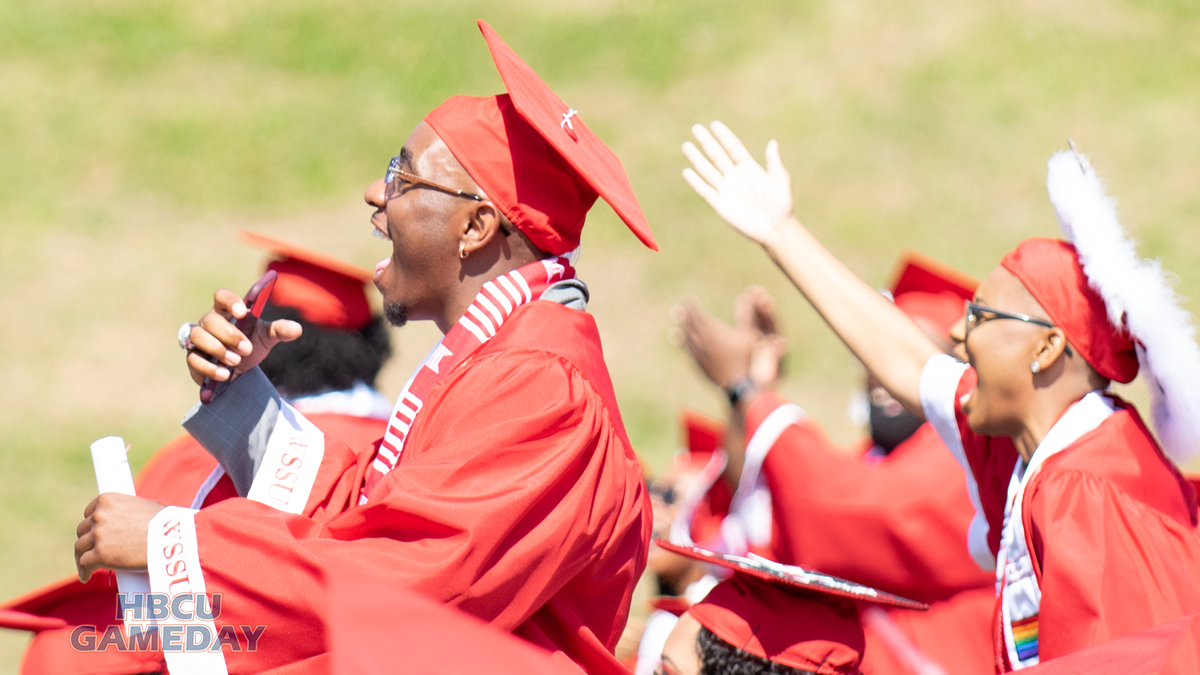 Justin Ross not only followed in the footsteps of his father by attending WSSU, he also left a few of his own at the school.

His mother, Michelle, didn’t go to an HBCU. She went to St. Joseph’s in Philadelphia, where the Ross family is from. But she was not unfamiliar with WSSU as she visited the campus when Justin’s dad was there.

Friday morning, just after her son graduated Summa Cume Laude, she reflected on what started him down this path.

“When Justin was graduating in 2017, Trump had just become president,” she said. “So the climate in America had changed. So we knew we wanted him to go to an HBCU.”

Standing below the basketball gym he used to play in — the C.E. Gaines Center — named after the coach he once played for, Monte Ross said he knew it would work.

Justin said he didn’t know much about WSSU (other than the obvious) initially.

“Nothing. I just knew my dad went here,” he said, fighting to hold onto the array of adornments to his red graduation robe. “And now…this university…I’m forever indebted.”

Ross definitely left his mark. He graduated with a 3.94 GPA, was a Chancellor’s Scholar and a Simon Green Atkins Scholar. He also became a member of Kappa Alpha Psi Fraternity Inc. And he did it all debt-free.

“Justin has always been that type of student from Day One, since kindergarten,” Michelle Ross said. “He knew he would have to balance sports and academics.”

“They were they the only school that really gave me a chance in terms of the full academic scholarship, and you can’t beat college for free,’ Justin Ross said. “Graduating debt-free, you can’t really beat that.”

Ross also became a champion as a Ram. He was a reserve guard on the 2019-2020 WSSU squad that brought home the program’s 12th CIAA Tournament title in Charlotte. His coach was another man with a family legacy at WSSU: Cleo Hill Jr.  Ross credits Hill for getting the program back on track.

“A lot of the things that I try to tel the young guys that are coming in to the success: My freshman year, we were 5-20. Coach Hill comes in, he starts building some thing, and then he wins — what — his second year in? And it’s his second time winning the CIAA title, with a different team. Success just follows Coach Hill, he knows what to do. He’s a professional.”

As a coach’s son, Justin Ross would know. He grew up watching his father on the sidelines as an assistant at St. Joseph’s and the head coach at Delaware. Monte Ross is currently an assistant on Aaron McKie’s staff at Temple. He recalled watching his son and his teammates win the title at Spectrum Arena on Feb. 29, 2020 after trailing by 11 with less than four minutes to go.

“For their stick-to-it-ness to come back and do it; And to see the pure ecstasy and joy on the players’ faces once it was all over, and that sense of accomplishment. They are bonded for life,” he said. “When you’re a champion, that’s something that no one can ever take from you, and that’s your bond that you have with your brothers that a lot of people don’t get to experience.”

The business administration major, finance minor leaves WSSU not only with academic and athletic success— he’s already got a job. Ross was offered a position with Vanguard last summer by a senior manager on the golf course.

“I’ll be doing roles like corporate accounting, financial planning and analysis. Basically banning stuff, “ Ross said modestly of his job-in-waiting. “Being able to learn it and spread that knowledge is important to me.”

You won’t find Justin Ross’ name as a statistical leader in any category of the school’s record books. But that doesn’t mean he hasn’t left his mark. He not only has the stoles and the job, but also the ring to prove it.

393
The Latest in HBCU Sports and Culture