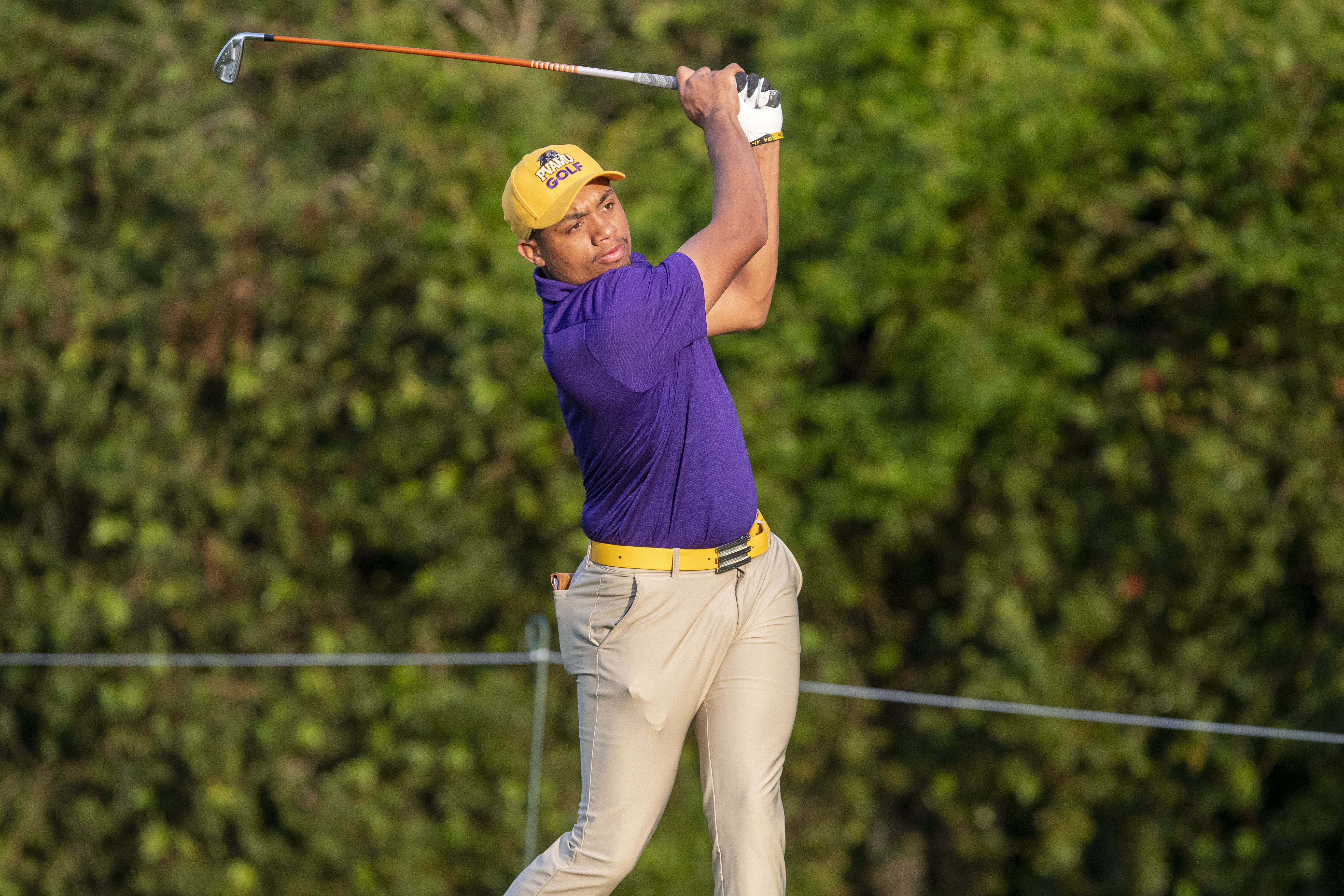 The Prairie View Panthers fell behind the Howard Bison for the first two days of the PGA Works Collegiate Championship at TPC Sawgrass in Ponte Vedra Beach on Monday and Tuesday, but roared back in a dominating performance on Wednesday’s final day to bring home the Division I HBCU National Championship.

Playing two days on the Stadium Course (Monday/Wednesday) and one Tuesday on the Valley Course, the Panthers, fresh off their 2021 SWAC championship played steady down the wire to take home the top prize.

The Panthers finished with a team score of 921 to finish four strokes ahead of a surging Alabama State Hornet team who finished at 925.  The Florida A&M golf team finished third  at 938.

PVAMU head coach Kevin Jennings, the HBCU Golf Coach of the Year, led the Panthers to the title was just happy to get back to coaching golf.  “It was wonderful to get some competition in and allow the guys and girls to get out and compete in such a wonderful venue, such great competition, and allow them to achieve what they achieved,” said Jennings.

The weather, which was benign during most of both practice rounds, turned to the evil element on Wednesday.  With wind gusting at 15-20 MPH, drives, approach shots, and even putts were affected by the swirling nature of the gusts.

With the gusty winds swirling in the bowl that makes up the arena of the famous island green at TPC Sawgrass, the most famous hole on the PGA Tour and possibly all of golf, several players found themselves switching clubs, second guessing the distance and what it took to make it safely on the green.

The drama on the 17th hole threatened to change the entire dynamic of the tournament.PVAMU lost several strokes on the hole allowing ASU to close the gap with the Panthers.  In the end, the final two Panthers safely navigated the hole on their first try, cutting the faltering down the stretch.

Fun fact: The TPC Sawgrass was famously designed by Pete Dye, an innovative course architect.  While Dye is credited with credited with the beautiful and challenging layout of the TPC Sawgrass Stadium Course, his wife should also get some credit.  As Pete was laying out the course, Alice said “Why don’t you just make an island green.”  The result is the most famous hole in golf.

No.1 Ranked Team Falters at Sawgrass

FAMU head coach Mike Rice was disappointed in the performance, but looks forward to the NCAA Regional which the team qualified by winning the 2021 MEAC Championship.  The Rattlers will not travel far as the NCAA has selected Florida State as host of the regional with their new renovations constructed and designed by Jack Nicklaus.

“It’s been a long week.  We’re disappointed but the guys hung in there and fought.  Tough golf course, weather got crazy,” Rice said. “The wind started playing and playing 17 with wind like that was crazy.  You’re down there and it’s like the ball hit a wall.  Guys fought to the end, we just didn’t have it this week.”

Prairie View will also enter the NCAA Regional, drawing New Mexico as the site for their appearance.  The Panthers earned the automatic bid for winning the SWAC championship.

If there was a star in the PGA Works field, it was Greg Odom Jr.  Odom was the low score medalist for the tournament, winning him the individual national champion medalist honor.  Playing for the first-year team in the Bison, sponsored by NBA great Steph Curry, Odom proved that HBCU players could play on professional tracts.

“It feels great.  I was out there with the lead trying to maintain it.  I was just out there having fun.  I feel like all we need to do is win, win, win.  This should be a winning program one day.  I feel like just being around a lot of successful black people at once with the same goal is always a great thing.  When he (Steph Curry) sponsored us I felt like it was the right decision to come here,” Odom said.

The PGA of America, PGA Works and PGA Tour all made efforts to assist in the tournament.  PGA President Jim Richerson was not only on hand, but he served as announcer on the first hole for the championship round.  Several members of the leadership of the PGA attended and worked the event.  It was a testament not only to their commitment to host the event, but make sure that officials that cover and administer PGA events were there to put the same effort into the PGA Works Collegiate Championship.

“It’s fantastic (serving as announcer).One of the really neat things we get to do as PGA officers is be involved in a lot of different championships, so the PGA Works Collegiate Championship is one of our major events and right after this I will be doing the PGA Championship and later in the year the Ryder Cup,” Richerson said.

“This event is important so it was an honor to be on the tee today and meet a lot of these young men and watch them tee off .  Some incredible talent, I wish I could play that well. It’s great to be here, it’s great to be involved.  This will be the next generation of some of the tour players and hopefully some of our PGA Members,”

Jennings felt the professional course elevates the experiences of the HBCU players.

“If we’re truly going to raise the bar and elevate what we’re doing, we have to continue to elevate the venues that we encounter or play on.  We would like to continue playing in places like this, elevating, playing in better and bigger events as well as elevating what we do,” he said.

The Miles College Golden Bears led from the start and held on to win the PGA Works Division II Collegiate Championship winning by an impressive 21 strokes (947).  The Bears overtook the Livingstone Blue Bears who came in second at 968.  Savannah State placed third with 974, Bluefield State finished with 998, Kentucky State finished at an even 1,000 and Lincoln rounded out play with 1,007.

Anthony Lumpkin for Miles won the individual medalist honors with an individual score of 231.

With less women’s teams competing, the tournament placed all teams in one division.  The Texas A&M-Corpus Christie Islanders dominated the tournament from wire-to-wire finishing with a score of 928.  The HBCU national championship goes to the Delaware State hornets who carded a 956.

The Hornets also had the individual champion in Baipor Khunsri.  She posted a three-day total of 221 to win the title by five strokes and give the Hornets their first medalist in the seven-year history of the team.

Dillard pulls off shot of the tournament

While FAMU as a whole didn’t have its best effort, Mulbe Dillard thrilled on the final day with the shot of the tournament. After a crisp drive down the middle of the par four seventh hole, he had a wide open shot to the unprotected green. Dillard pulled a wedge, put backspin on it to slow it down and dropped it in the hole from 110-yards out. The shot drew cheers from a decent-sized gallery, including Dillard’s parents who like many other parents were walking with their sons. The Eagle fueled Dillard’s sixth place finish overall in the tournament.

The PVAMU and FAMU teams will continue to play as winners of their conferences.  The NCAA Regional is set to begin.  The Rattlers carry the 13th seed into the Florida State regional and the Panthers will hold a 14th seed in Albuquerque on May 17-19.