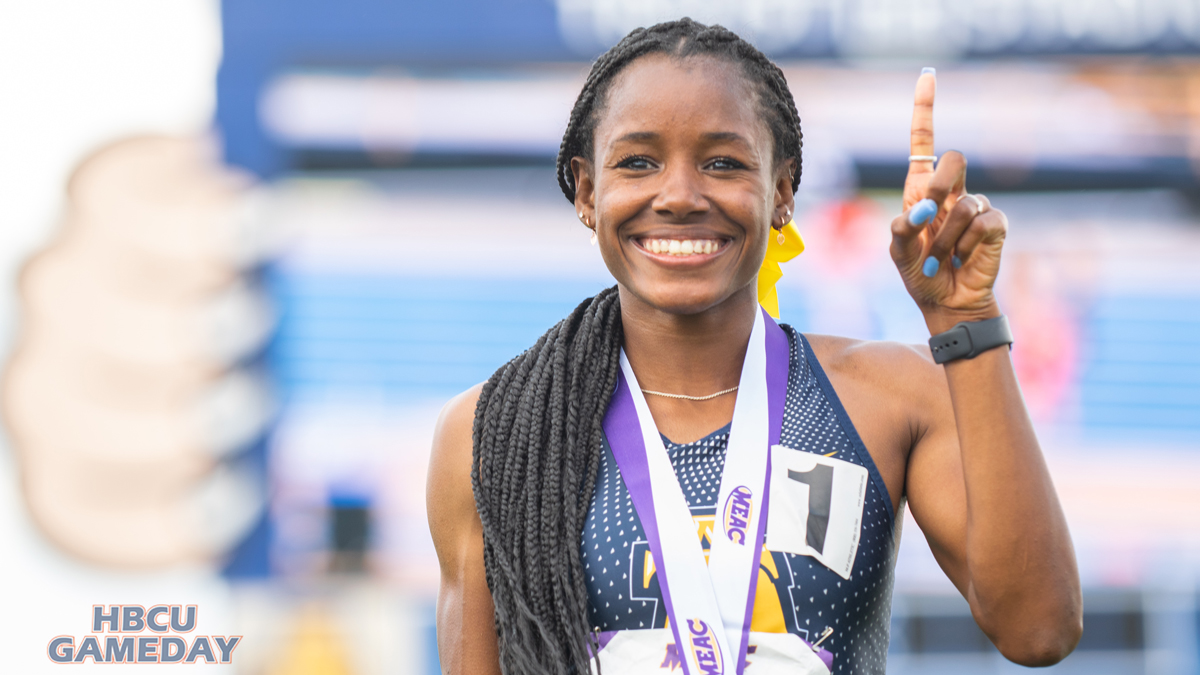 The 2021 Outdoor MEAC Track Championships are off and running. The sprint titles are still to come, but hardware has been handed out.

Greensboro, NC — It’s no secret what (pretty much) everyone is coming to the 2021 Outdoor MEAC Track and Field Championships to see. The answer is speed. Aggie speed to be exact.

And they’ve gotten a taste over it through the first two days. North Carolina A&T has looked as dominant as everyone thought it would be in both men’s and women’s sprints. The A&T men will enter Saturday nine points behind Norfolk State, but no one who has beheld the Blue and Gold Sprinting Machine is on upset alert. After all, the top six finishers in the 200m preliminaries come from the home team.

The A&T women are already on top, up two points on the NSU women. Wins were picked up by Madeleine Akobundu (long jump), Sandra Brown (pole vault) and G’Jasmyne Butler won the 3,000 meter steeplechase.

The graduate student from Raleigh has been a part of A&T’s rise from a middle-of-the-pack MEAC squad to a national terror.

“I remember coming here on my visit in 2016 and seeing the team. It didn’t have any 1500 meter runners, any steeplechasers, they didn’t even have a 4×400 because it wasn’t enough people. So being able to see the team grow and being a part of the diversity of the distance team is incredible and I’m so glad to be a part of it.”

Friday’s title was the second in a row for Butler. She won it in 2019, but the with last year’s MEAC Track and Field Championships canceled due to COVID-19, she had to wait to defend her title. Now a graduate student, Butler reflected on her choice to come to A&T.

“If I went anywhere else I’d kind of have to keep myself in a shell or a bubble or — like show different parts of myself to different types of people. But here I can completely be myself and the friends and family I’ve made here is something I wouldn’t give up for the world.”

Another champion from Friday, on the other end of the spectrum, was Delaware State’s Catherine Glenn. The freshman from West Palm, FL literally picked up the javelin this year. Now, she’s the MEAC champion.

“I used to play softball, so they knew I had an arm. And being a sprinter, with the speed also, they just put two-and-two together,” Glenn said. “They’ve been working with me and working with me, and it just all came together at the right time.”

Add in the fact that it was her birthday, and Glenn couldn’t contain her excitement. And she didn’t try.

“It’s just awesome and this is a great atmosphere,” she said with a smile. And I’m just happy to be here, to be honest.”

The sprinters will have their day on Saturday. Running events will start on Saturday at noon.