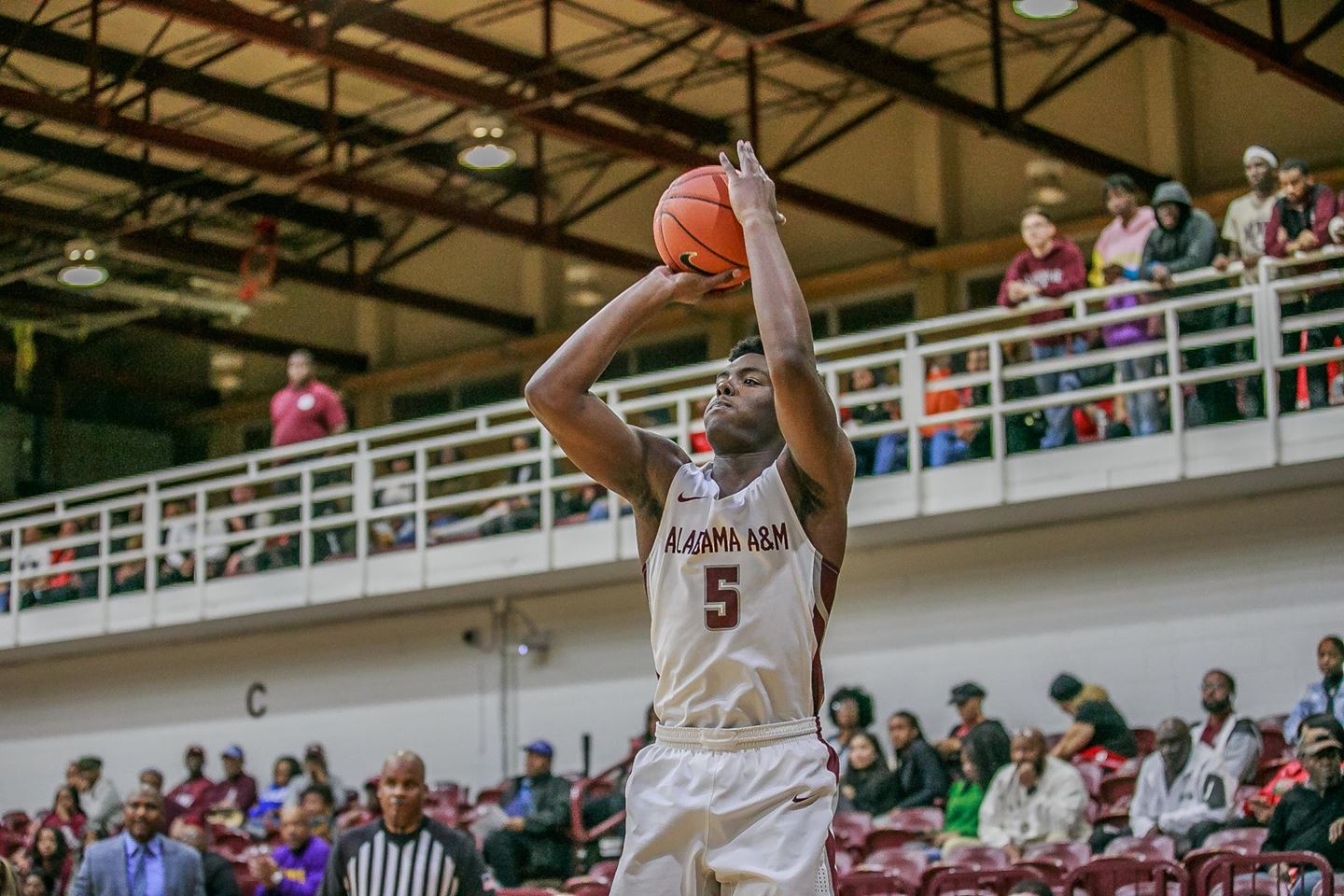 HUNTSVILLE, Ala. – In just the second game of this unprecedented season, sophomore forward Jalen Johnson (Indianapolis, Ind.) led the way once again with a 24 point, 11 rebound double-double to help Alabama A&M (2-0, 0-0 SWAC) defeat No. 16 South Alabama (6-3, 0-0 SBC) in double overtime 93-90 in an NCAA Division I men’s basketball game on Saturday, December 19.

Johnson went 10-for-16 from the field to go along with three steals and two assists on the night while sophomore guard Garrett Hicks (Madison, Ala.) also surpassed the 20-point plateau with 23 points, including a career-high 7-of-14 from behind the arc, along with four rebounds.

Sophomore center EJ Williams (Cincinnati, Ohio) also recorded a double-double with 13 points and 12 boards while Tatum rounded out the double-digit performances with 10 points. Sophomore guard Cameron Tucker (Birmingham, Ala.) put forth another well-rounded performance, recording double-digit assists for the second consecutive game and added nine points and three steals in the contest.

Trailing by two with 17 seconds left in the first overtime, Jevon Tatum drove for a short jumper with two seconds on the clock to make the biggest shot of his young career so far, tying the score at 82-82 and sending the game into a second overtime.

After trading scores to open the second overtime, the teams remained deadlocked but A&M would change that permanently, grabbing the lead for the last time in the game as they went on a four-point run from scores by Johnson and Williams with 1:29 remaining.

With just under a minute to play the two teams traded three-point scores as South Alabama’s Michael Flowers made a three to close the gap to 88-87 while Hicks responded with
his own out of a timeout to push the lead back to 91-87 with 36.7 seconds to play.

Flowers scored once more seconds later for the Jaguars but it would be to no avail as Tucker sank a pair of free throws with 18.4 seconds remaining to help secure the 93-90 double overtime win.

“This was another big win for our team, especially pulling it out after two overtimes,” said head coach Dylan Howard. “That year of experience between a players’ freshman and sophomore years is key for their development and I feel that the experiences our guys, especially the young guys, from last year helped us close out this game and will hopefully just be another notch in us closing out these types of games going forward.”

Alabama A&M started the game out strong, jumping out to a 10-6 lead during the first five minutes of play and heading into the first media timeout.

South Alabama then tied the game at 10-10 before Anjay Cortez (Charlotte, N.C.) scored his first basket of the game inside and added the free throw after being fouled with just under 14 minutes to play. That was followed a few possessions later by a three from Hicks to give the Bulldogs a 16-10 lead at the 11:39 mark.

Following a free throw by USA’s Flowers, Johnson added three points in two possessions before a response inside by Jaguar Kayo Goncalves to make the score 19-13 midway through the half.

Minutes later, Hicks made his second three of the frame off an assist from junior guard Brandon Powell (Huntsville, Ala.) to put the Bulldogs up 22-13 at the 8:34 mark. However, consecutive baskets from South Alabama’s Goncalves and Tyreke Locure reduced the deficit to back four points.

The Bulldogs extended their lead to double digits for the first time at 28-18 with 4:55 to go after a 6-0 run sparked by baskets from Johnson and Cortez, and followed a few trips later with a triple from Jevon Tatum to stretch the lead to 32-20 with just under three and a half minutes on the clock.

Over the next few possessions, Hicks made two of his seven threes to close out the half and give A&M a 38-22 lead heading into the locker room.

The second half started as a continuation of the strong play by the Bulldogs as yet another long ball from Hicks extended the lead to 19 points, their largest of the game, at 49-30 with 14:58 to play.

Minutes later South Alabama begin to chip away at the lead as they used two separate runs to fight their way back into the ball game. The Jaguars responded by going on an eight-point run to reduce the Bulldog lead to 49-38, and later a 10-2 burst to close out regulation and force the game into overtime.

Hicks carried his hot shooting into the extra period as he got the scoring started in the first overtime, sinking a three off a pass from Tucker before USA scored on back-to-back possessions to take an 80-79 lead with just over three minutes to play.

After a late free throw from the Jaguar’s K.K. Curry, newcomer Tatum came up big time by driving past the defense and knocking down a short jumper to send the game into the second overtime. There, the Bulldogs would outscore the Jaguars 11-8 to close out the game.

South Alabama was led by Michael Flowers with 26 points and eight rebounds, while K.K. Curry also surpassed the 20-point plateau with 20 points and nine rebounds. Starters Sam Iorio and Tyreke Locure rounded out the double-digit performers for the Jaguars, with 13 points and 11 points respectively.

“Heading into the conference season we open with two well coached opponents in Jackson State and Grambling,” explained Howard. “With those games being in January, we get a much-needed mental break for a little while then get right back into the swing of things looking to compete in our conference.”

Alabama A&M will now prepare for conference play as they open Southwestern Athletic Conference action with a pair of home contests against Jackson State on Saturday, January 2 and Grambling on Monday, January 4, times will be determined at a later date.