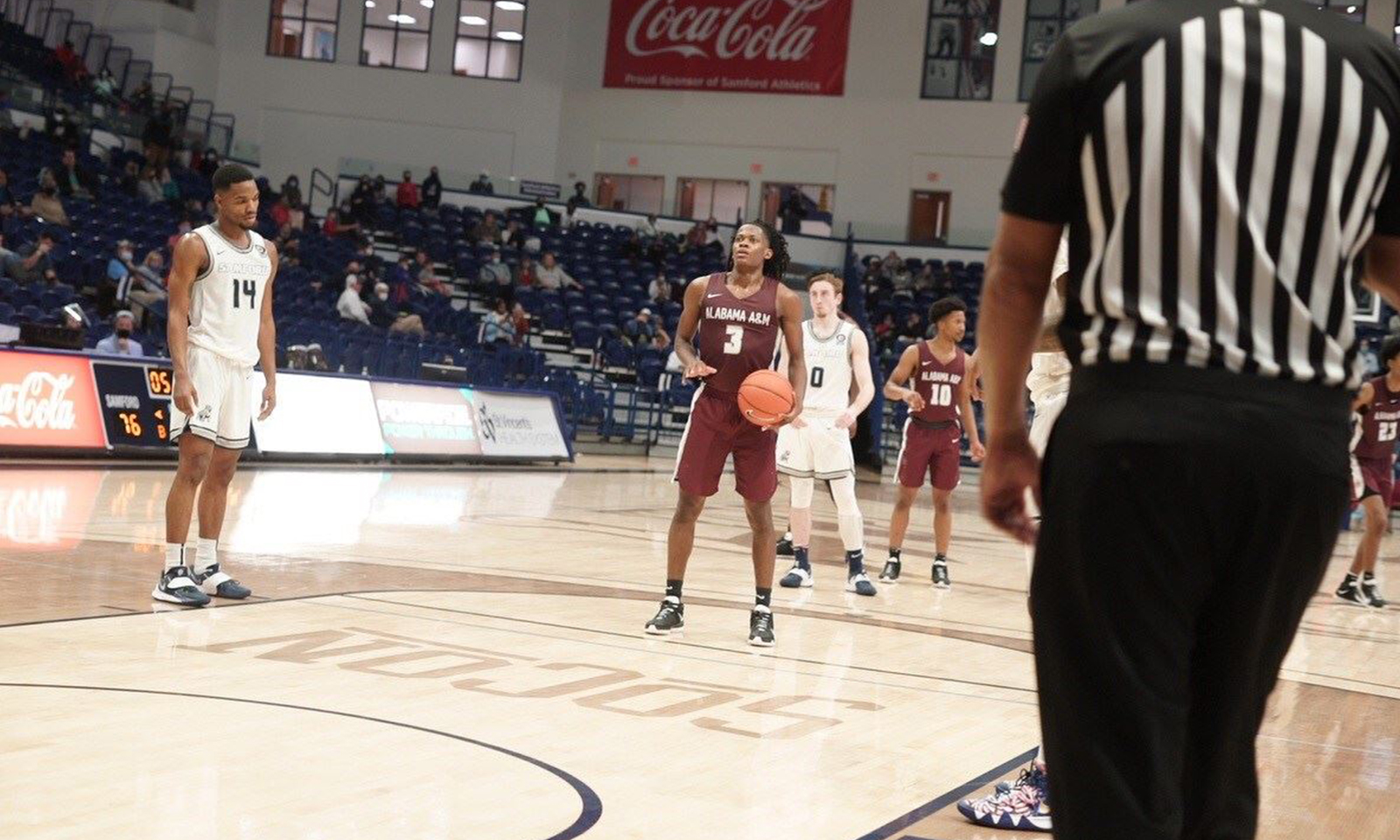 “Huge win for us, especially with it being the first game of the year and on the road,” said head coach Dylan Howard.

BIRMINGHAM, Ala. – In their long awaited season opener, sophomore guard and Birmingham native Cameron Tucker made the game-winning basket and free throw as Alabama A&M (1-0, 0-0 SWAC) defeated Samford (0-1, 0-0 SoCon), 78-76, in an NCAA Division I men’s basketball game on Sunday, November 29.

Tucker played a well-rounded game, nearly recording a double-double as he dished out 10 assists to go along with his nine points and six rebounds while sophomore forward Jalen Johnson (Indianapolis, Ind.) led all scorers with 28 points on 13-of-17 shooting and added seven rebounds.

Sophomore guard Garrett Hicks (Madison, Ala.) registered 18 points, eight rebounds and three steals on the day, and junior forward Myles Parker (Madison, Ala.) rounded out the double-digit scoring performances with 10 points of his own.

“Huge win for us, especially with it being the first game of the year and on the road,” said head coach Dylan Howard. “We knew that we had to be ready to play fast and guard the three-point line, and we held them to 5-of-24 for three. Jalen had a huge game, and we knew they had no one to match up with him. We are extremely proud of Cameron and we truly believe in his play making ability.”

The Bulldogs got on the scoreboard early, with Johnson scoring the first six points of the game, followed by a floater by Hicks to gain an early 8-2 lead at the 16:42 mark of the opening half. Samford’s Logan Dye started the scoring for the home team with his own personal 5-0 run with a three pointer and offensive put back to narrow the lead to 8-7 into the first media timeout. The two teams battled back and forth over the next few possessions as Johnson delivered his eighth of his 12 first half points to reclaim a 10-9 lead with just over 12 minutes to play in the half.

After a score plus the foul by freshman forward Anjay Cortez (Charlotte, N.C.) to put the Bulldogs up 12-11 with 11:54 to play, Samford responded with a 7-0 run sparked by scores from three different players to take a 19-12 lead at the 7:48 mark of the first half. Minutes later, a pair of threes by SU extended their lead to double-digits for the first time at 27-17, before a layup by Cortez and a triple by Tucker brought the deficit to seven, with 3:50 to go in the half. Dye sank his second three of the first half to extend the Samford lead to double-figures once again, and the Bulldogs entered the locker room trailing 43-32 at halftime.

Alabama A&M opened up the second half with a jumper by Tucker and a five-point run by Hicks as they began to climb back into the game at 47-40 with just under 16 minutes to play. Coming out of a timeout, Johnson scored his first points of the second half on a long mid-range jumper to reduce the deficit to five, before scores from Samford’s Preston Parker and Christian Guess made it 52-42 at the 14:08 mark.

After the teams continued to trade baskets over the next few possessions, the Bulldogs responded with a 7-0 run, fueled by three different scorers, to reduce the lead to just three points, 57-54, with 10:48 to play. That margin would continue to dwindle as a steal and finish from Hicks to close the gap to a one-point game, 63-62 at the 8:36 mark. A&M took the lead on their next offensive possession on a layup from Parker, their first since they took a 12-11 advantage early in the first half. Samford tied it upon free throws from Dye with 5:51 to play, and later took a 68-66 lead on an offensive rebound and put back off a Bulldog turnover.

Trailing 71-68, senior guard Brandon Miller (Huntsville, Ala.) tied the game at 71-71 with a three pointer with just under three minutes to play. That was followed by a short jumper by Hicks after an offensive rebound that gave the Bulldogs a 75-73 lead with 1:14 to play, forcing a Samford timeout. On the very next possession, Myron Gordon drove the lane and finished the play plus the foul to give Samford a one-point lead with just under a minute to play. After a Bulldog turnover, Parker drew an offensive foul to give Alabama A&M the final possession of the game with 21.9 seconds remaining. Tucker responds on the final possession with a drive and finish, adding a free throw after the foul to give A&M a two-point lead with 5.9 to play and, following a defensive stand, secured the season-opening win for the Bulldogs.

“Our team played well on both ends today,” added Howard. “Garrett Hicks hit timely shots at key moments and two of our newcomers in Anjay Cortez and Myles Parker stepped up big time with their effort and activity on the court.”

Guess led the way for Samford with a 22-point, 10 rebound double-double, while Dye finished with 21 points and seven rebounds.

The Bulldogs next game will be on Saturday, December 5 as they travel to Columbus, Ohio to face off against perennial power Ohio State. Tip-off is set for 7 p.m. (EST).

NOTES
With the win, Alabama A&M is now 4-1 over the last two seasons against all in-state mid major opponents.