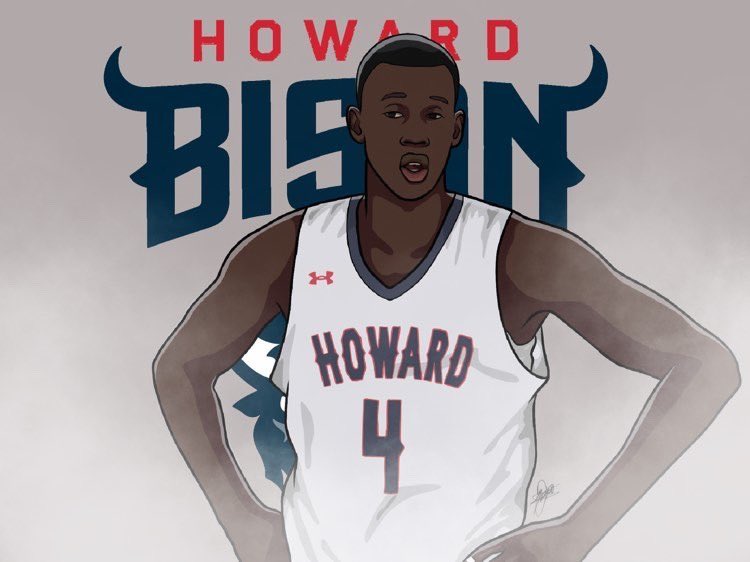 Howard University has higher than usual expectations, thanks to five-star recruit Makur Maker. But the season debut showed a work in progress.

There were glimpses of greatness and pockets of potential for Makur Maker and Howard on Thursday. But there were also moments where the Bison showed just how green they are.

Howard University got off to a fast start but eventually succumbed to a superior Belmont team in a 95-78 loss on Thanksgiving.

HU coach Kenny Blakeney said that he was actually dissatisfied with the way his team started, despite their closeness on the scoreboard.

“It seemed like because the lights were on, our guys got out of character a little bit and did not pay attention to the things that we have done up until this point,” he said. “Even though the scoreboard said that we were doing okay, I just felt like we had gotten out of character and really trying to execute our offense.”

Maker scored seven of his 11 points in the game’s first 10 mins. The five-star recruit also added eight rebounds and a block in his collegiate debut. Expectations for Maker are high externally, but Blakeney knows his freshman is still adjusting to the colligate level.

“For Makur to play his first game against arguably one of the best mid-major programs in the country, and get his first taste of college experience, I’m definitely happy with how he did,” Blakeney said. “And he’s only going to get better.”

Howard and Belmont were neck and neck early on, but separation occurred once Maker cooled off. Howard was held to one field goal during a six-minute stretch of the first half in building a double-figure lead.

Belmont led 48-27 at halftime and would stretch the lead to 30 points at one stage before Howard closed the gap.

Growing pains are to be expected for this Howard team, despite Maker’s talent and presence. HU won just four games all last year and is heavily slanted towards freshmen and sophomores.

Thomas Weaver led HU with 14 points while Issac Suffren and Kyle Foster both finished with 10 points each.

Makur Maker and Howard will take on Division II power Queens University (NC) on Friday before wrapping up the Paradise Jam against George Mason on Saturday.

But Blakeney isn’t letting his guard down just because his squad is going up against a D2 opponent.

“I think we get it a little twisted when we think that a Division II school can’t beat a Division I school, or we’re supposed to just show up and win,” Blakeney said. “We don’t have that history and culture. They got a better culture, history and traction than we do. And that’s what we’re trying to establish.”

From the moment Maker shocked the world and committed to Howard in June, he became a symbol. He became a living, breathing answer to the question “what if a top player picked an HBCU over the big (predominantly) white schools?”

Many people who follow and support HBCU sports saw Maker as an answered prayer. The first drop of a potential stream of big-time talent to HBCUs. Others saw him as making a questionable decision regarding his future as a possible lottery pick, if not utterly foolish for not following the beaten path.

But Thursday afternoon we saw Maker the player take the court. He showed his skill and talent in spurts, and it made the supporters giddy about what could be down the line. At other times he and his young teammates looked like a team playing its first game together, giving the anti-HBCU crowd ammunition to question his decision again.

Only time will tell how Makur Maker and Howard will progress. But his coach says he’s confident he’ll continue to improve and get better.

“The college game is so much different than the high school game,” Blakeney said. “And it doesn’t matter if you’re playing at Howard or if you’re playing at whatever school that is. It’s going to be an adjustment. I think that for his first game, he got a taste of what college basketball is like.”

It was just the first taste. One game does not a narrative build.