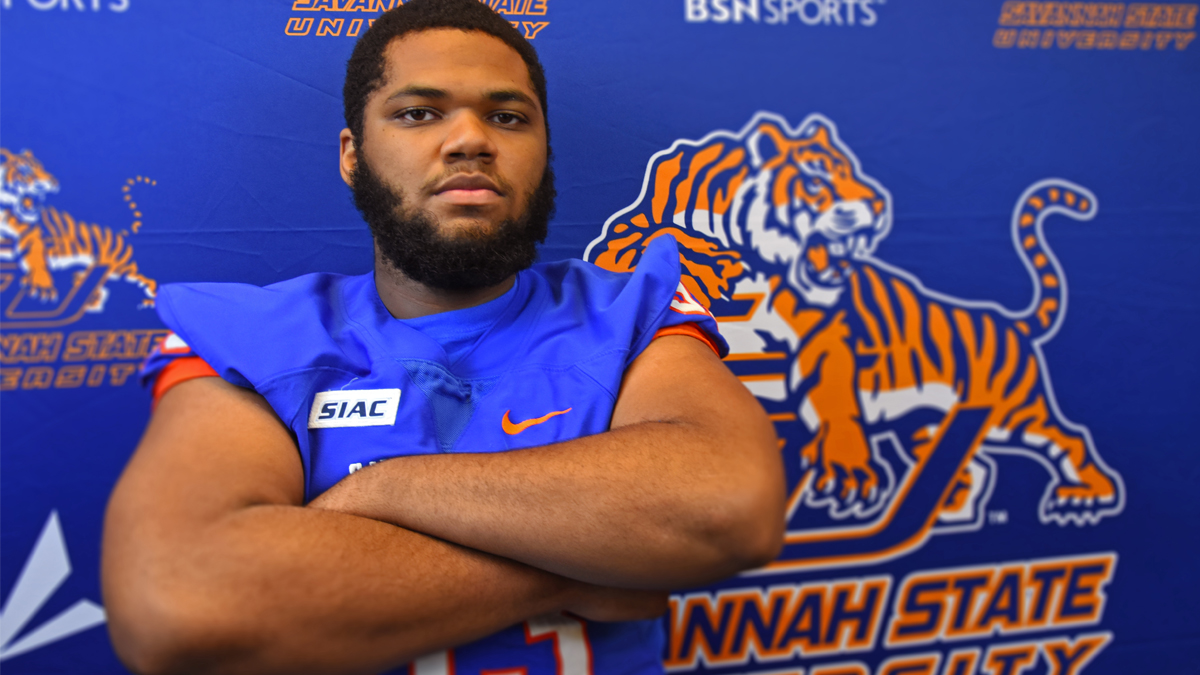 Getting Settled In Savannah

Kyle’s unbridled optimism has carried him through the trials of the last year, even when earlier this summer he faced missing yet another football season after it was suspended due to the pandemic.

“There was something good behind it,” Kyle said of his bout with cancer. “The journey, even though it was hard and vigorous, it was just amazing. I don’t know what to say. I just took it day by day.”

Kyle was not with his team in 2019 during their historic victorious season. But in the spring of 2020, cancer-free, he enrolled in classes at Savannah State and strapped on his pads, a white No. 93 jersey, his orange pants and blue helmet with the Tiger head proudly displayed. He stood at the edge of the field, with his Savannah State football gear on for the first time, ahead of the spring game, and the waterworks began.

“I had been waiting for that moment for a while,” Kyle said as his voice cracked. “Even when we were on the field and coach would mention our names, that right there just sent me. I am getting emotional now.”

Kyle took advantage of summer classes to catch up on the missed fall semester and improved his GPA to a 3.8. He’s majoring in biology and wants to be a physical therapist after graduation.

Encouraged by family members, Kyle started doing CrossFit over the summer and during the quarantine to regain his strength. He used his sibling for weight training and wrote messages to himself on his shoes so every time he looked down he would be encouraged by what he had already conquered.

During his bout with cancer, he had made a wish with the Georgia Make-A-Wish Foundation to visit with his favorite NFL team, the L.A. Rams.

Last week, his wish was granted but with an adjustment due to the global pandemic.

The Make-A-Wish Foundation and the Rams will feature Kyle as a part of their Crucial Catch Captains program. The NFL’s Crucial Catch mission is to fight cancer through early detection and risk reduction, according to the NFL’s website.

During the Oct. 26 Monday Night Football Game on ESPN, a cardboard cutout of Kyle will be in the stands as a part of the Crucial Catch Game.

When told the news, Kyle insisted that every one of his teammates be included as well. The foundation and the Rams honored the request and will feature cutouts of the entire Savannah State football team alongside Kyle.

Along with being featured at the game, Kyle will receive a customized Rams jersey with a Crucial Catch Captain’s patch.

Kyle has also become a spokesperson for the Leukemia & Lymphoma Society. Along with his teammates on the defensive line, he was celebrated in a virtual candle lighting event recently, where he became an Honored Hero. In August of this year, he helped raise $2,000 for the society in their fight for cancer awareness and treatments.

On Monday, Oct. 19, Kyle and the entire Savannah State football team opened up fall practice. This semester, Kyle will learn Savannah State’s defensive system and earn his spot at the line, preparing for next semester and the return of live football games.

Frazier is ready for it, cancer free, optimistic and proud to finally be wearing the blue and orange.