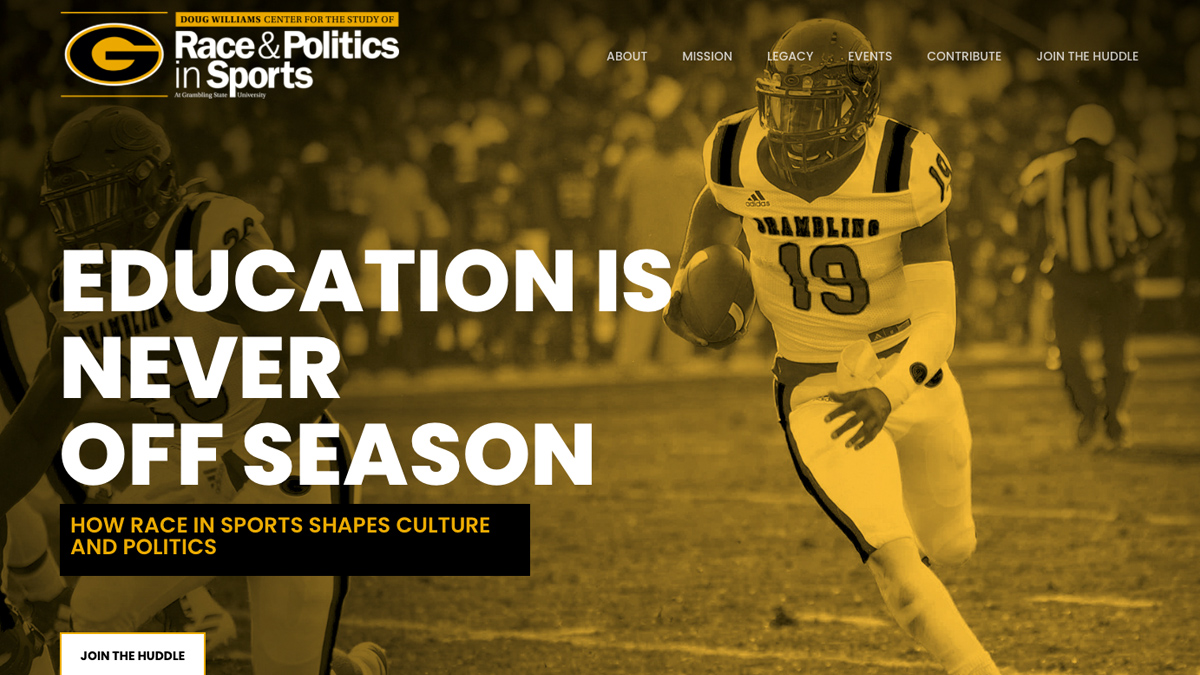 GSU’s Doug Williams Center for Race and Politics board named

Grambling State names the Executive Director, board named for the Doug Williams Center for Race and Politics in Sports.

GRAMBLING, La. – September 9, 2020 – Grambling State University has named Brandon A. Logan as Executive Director for the Doug Williams Center for the Study of Race & Politics in Sports.

Members of the inaugural Advisory Board have also been named. The Center, established in August, will be supported by the National Football League (NFL) Campus Connection program and other public and private donors.”Sport is both a microcosm and is potentially transformative of the racial issues confronting society,” says Logan.

“Considering this complexity, the Doug Williams Center for the Study of Race & Politics in Sports will critically analyze the racial politics of athletics and offer thoughtful solutions to level the playing field. My goal is to develop an inclusive learning environment that equips a multi-generation of scholars and decision makers with valuable competitive intelligence that improves organizational structure and culture. I am humbled and honored to lead an initiative that bears the name of my former coach and American trailblazer, Doug Williams. ‘World-class’ and ’excellence’ have been synonymous with the history of Grambling State University and its athletic program. The Center will embody these qualities in the continuation of this institution’s legacy.”

“When Brandon first walked on the football field, I knew he was a leader who could bring individuals together,” says Doug Williams. “From academic leaders, athletes, politicians, social activists, students and more, I couldn’t think of a better person to take the lead on the initiative.” The Center is named after Williams, a National Football League Executive and Grambling State alumnus; in 1988, Williams was the first Black quarterback to win a Super Bowl.

“Throughout his time as a student and in his personal career, Brandon has shown a unique ability to connect the dots,” adds Connie Walton, Provost and Vice President of Academic Affairs. “We look forward to him engaging our faculty in sports administration, sports marketing, business, history and other disciplines in the Center’s initiatives.”

The Doug Williams Center’s newly named Board members represent some of the best minds in sports and education. They are well positioned to guide the Center as it tackles challenges and offers solutions to some of today’s most relevant issues. This esteemed group includes the individuals listed below. Other Board members are expected to be added to the lineup.

“The Doug Williams Center for the Study of Race & Politics in Sports will add great value to our schools, communities and country,” says Board member, Dr. Raunda Williams. “To have a place where different entities can come together to discuss, analyze and create a culture for positive change is much needed anytime, but especially in a time of unrest. Doug and I are so humbled and grateful to be able to work with such a distinguished, accomplished and forward-thinking group of individuals assembled on this advisory board.”

An endowment supporting The Center has been established by The Grambling University Foundation with Argent Trust Company. To make a tax-deductible donation to the endowment, click “CONTRIBUTE” at https://raceandpoliticsinsports.com/. Options are available for one-time gifts as well as on-going pledges. To contribute marketable securities or include the Doug Williams Center in your estate plans, please contact the Foundation at (318) 247-2981 or email raceandpoliticsinsports@gram.edu.

GSU’s Doug Williams Center for Race and Politics board named