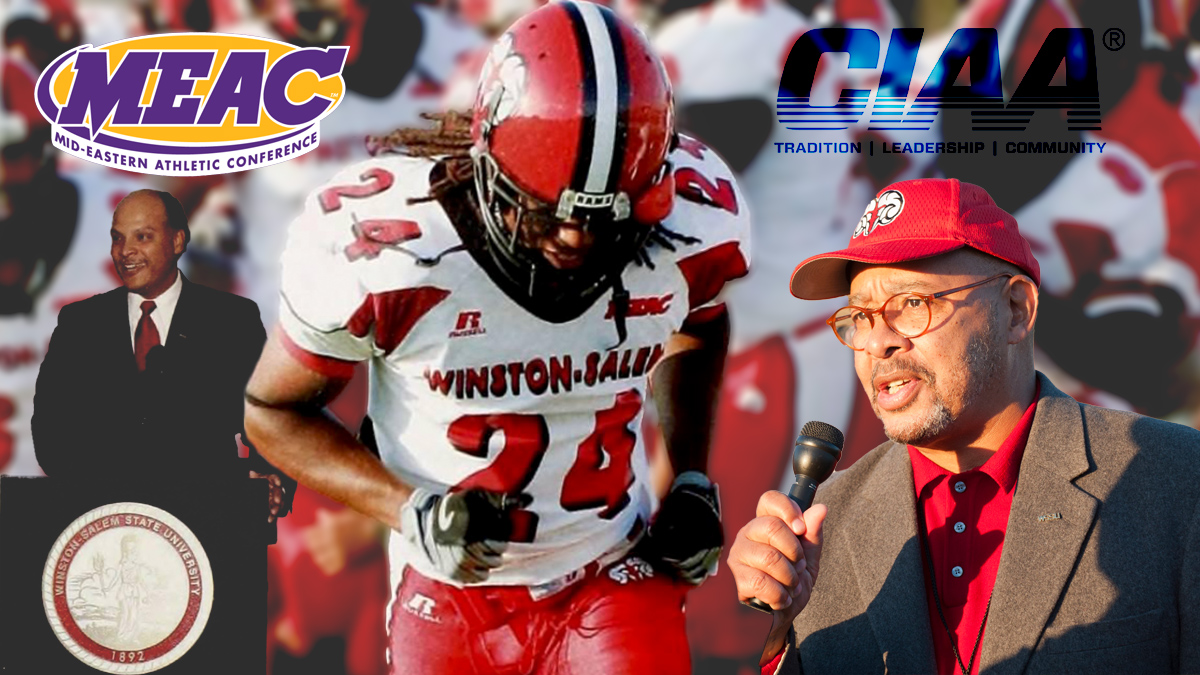 Winston-Salem State’s short, turbulent Division I attempt may have been the start of the MEAC’s membership issues.

You can cross one potential MEAC replacement off the list.

Winston-Salem State University Director of Athletics Etienne Thomas said don’t expect WSSU to attempt a move up to Division I or the MEAC. The conference has lost two schools — North Carolina A&T and Florida A&M — in the last several months.

“I say it often but I love the CIAA and I love Division II,” Thomas told the Winston-Salem Journal. “I love what it stands for and our voice matters in Division II.”

WSSU infamously attempted to move up to Division I status in the mid-to-late 2000s. It attained provisional membership in the MEAC before ultimately deciding to abort the mission and return to the CIAA.

Thomas helped her alma mater, North Carolina Central, complete its move to Division I around the same time. She was hired as WSSU’s AD last fall.

“Commissioner (Dennis) Thomas does a great job in the MEAC and our friends in Durham (N.C. Central) has a good home, but for Winston-Salem State we are all about Division II and the CIAA. Division II is a perfect fit for WSSU.”

Ironically, WSSU’s decision to move back to the CIAA a little over a decade appears to have started the unraveling of the MEAC.

July 2004 was a big month for Winston-Salem State University Athletics. The program was best known for basketball Hall of Famers Big House Gaines and Earl “The Pearl” Monroe as well as a championship football program that produced multiple NFL players despite its Division II status. Under the leadership of Chancellor Dr. Harold L. Martin and with approval from the board of trustees, WSSU decided it wanted to move up to Divsion I athletics.

“Moving up to NCAA Division I advances our university’s strategic plan and will offer our talented student-athletes even more challenging competition,” Martin said. “Specifically, competing on a bigger stage will elevate awareness of WSSU and our reputation for excellence regionally and nationally, while creating opportunities to generate even more revenue from our athletic programs.”

Gaines had been retired for a decade, but spent decades as the school’s director of athletics as well as its basketball coach. He wasn’t convinced that the school could financially make the jump up.

“I’m from Kentucky where we breed horses, and you don’t send a jackass to the Kentucky Derby,” he told the Winston-Salem Journal. “This is a five-year plan, and that means you have five years to get ready. It’s a step in the right direction, but the only thing that bothers me is the difference in money.”

The MEAC eagerly welcomed WSSU into the conference as a provisional member two years later. It would become the 10th football program in the conference.

“We are elated to welcome WSSU to the MEAC family,” MEAC Commissioner Dr. Dennis Thomas said in July 2006. “Obviously we think that WSSU is an outstanding academic institution with an excellent athletics program.”

Martin would leave WSSU that summer for a position at the University of North Carolina System, just before his Division I vision went into action. WSSU would spend the next four years transitioning to Division I.

The move allowed WSSU to renew its rivalry with North Carolina A&T, a school it had played on almost a yearly basis since the early 1940s before suspending its series after 1999. It would also mean going from playing almost exclusively in North Carolina in Virginia to playing anywhere from Delaware to Florida.

Things started off pretty well in football. WSSU went 4-7 its first season playing a full MEAC schedule in 2006, including a 42-14 win over A&T, its first since 1991. The 2007 WSSU football team went 6-5, highlighted by another win over A&T and a victory over Florida A&M in the Circle City Classic.

Basketball was a little bit rougher, as it was used as a cash cow while football never played any FBS opponents. It won just four games during the 2007 season when it played 18 road contests to just six at home. The following year the record improved to 12-17 under Bobby Collins.

Those early years would be the high point for WSSU in Division I. In 2008 the school was sanctioned for underfunding tennis and track and field, pushing the completion of the move back to the 2010-2011 season.

Didn’t We Almost Have It All?

“You’ve got Hampton. You’ve got Norfolk State. You’ve got Central,” Jay Walker barked over the ESPN microphone. “You just raiding the old CIAA?”

MEAC Commissioner Dennis Thomas beamed with pride inside the roomy press box at Bowman Gray Stadium on a hot, sticky night in Winston-Salem, North Carolina. Sept. 10, 2009 was a big night for the MEAC as FAMU played WSSU on a Thursday night broadcast under the lights.

The MEAC had just approved North Carolina Central, another CIAA school, as a provisional member of the conference. NCCU, a founding MEAC member in 1970, had bounced back-and-forth between the two conferences but was ready to join what would have been a three-headed North Carolina HBCU MEAC Monster with A&T and WSSU.

The dream didn’t last long, however, as the next day Chancellor Donald J. Reaves announced that WSSU was abandoning its quest to move to Division I.

“This decision is probably the hardest one I have ever had to make because I believe that WSSU belongs in Division I,” said Chancellor Reaves. “If there were any reasonable way to complete this transition without diverting resources from competing academic priorities, I would have recommended that we stay the course.”

It was a matter of economics. WSSU’s expenses increased from $2.88 million to $5.58 million during the move while its revenue increased only slightly, growing from $2.07 million to $3.77 million. The athletics department was nearly $2 million in debt despite a hefty contribution from its students.

“Currently, nearly 80% of total revenue comes from a single source, student fees. While the university has the second highest athletic fee in the UNC system, our fee is among the lowest in the MEAC where we are competing. With the size of our student body, it became evident that we were always going to be at a financial disadvantage.”