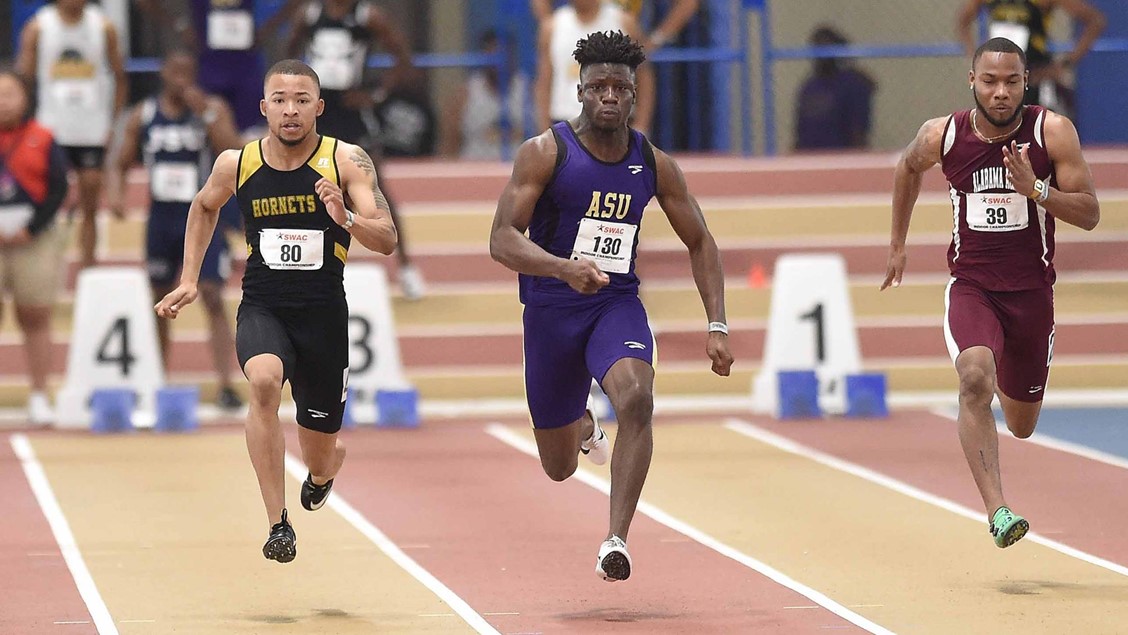 This SWAC champion continues to push himself despite the quarantine.

LORMAN, Miss. – The season may have come to an end for junior Bralon Robinson from the Alcorn State University men’s track and field program, but his drive, determination and work ethic did not.

A two-time SWAC Champion and three-time SWAC Athlete of the Week winner in his career, Robinson continues to push himself to be faster and stronger on the track, even when no one is watching.

“Although the season has been canceled, I keep going as if it’s still going on. I have access to a local track and I still train every day. I have a schedule where I do sprints and conditioning each week. I still have dreams and aspirations that I’d like to accomplish and to be the best I can be,” Robinson said.

The 2020 campaign concluded abruptly when the SWAC officially canceled all remaining winter and spring sport activities on March 13 due to the COVID-19 pandemic. Though, that hasn’t changed Robinson’s mindset or altered his goals.

“I want to win at nationals, both in the 60 and 100-meter dash. That’s the goal for me personally and I’m going to keep at it,” Robinson said.

Robinson was in the midst of a big 2020 year at Alcorn. He won back-to-back indoor meets at the Jaguar Invitational and the Bulldog Open in the 60m, and earned a bronze medal in the event at the SWAC Indoor Championships. Robinson registered a personal-record time of 6.72 at the SWAC preliminaries, which was the fastest time by anyone in the SWAC all year.

Moving into the outdoor season, Robinson tallied the No. 1 time in the country in the 100m with a 10.64 at the Jet Relays in Fort Worth, Texas on March 8. It was the first and only meet of the year for Robinson and the Braves before the season was cut short.

“I feel like I haven’t even scratched the surface yet. I am not even close to being at my best and showing what I can do. My goal is to run a 10.1 in the 100-meter. I’m nowhere near of what I know I am capable of,” Robinson said.

Robinson arrived at Alcorn for his freshman campaign in 2017-18. He made an immediate impact as he earned a gold medal in his very first SWAC Championship and was crowned champion in the 60m indoors with a 6.74 time.

Robinson kept it up during the outdoor season in 2018 and earned another first-place finish at the conference meet with a 10.331 in the 100m. It came after five top-three finishes during the regular season as both an individual and 4x100m relay team member.

As a sophomore, Robinson became a two-sport athlete at Alcorn. He was a member of the football team where he returned kicks and rushed the ball. Robinson was a part of the 2018 SWAC Championship football team. On the track, he ran team bests of 6.77 in the 60m indoors and 10.43 in the 100m outdoors. He scored for the Braves at both the SWAC Indoor and Outdoor Championships.

With his junior year now over athletically, the Canton, Mississippi native now preps for the 2021 season.

“He’s a hard-working, harmonious young man that gives 100 percent in the classroom and every time he steps on the track. The season ended, but we had a glimpse of the success and excitement that we will enjoy next season,” said Alcorn head coach Jimmy Joseph. “He’s a special young man!”

Robinson is majoring in Biology Pre-Physical Therapy and is on pace to graduate from Alcorn in May 2021.

“I’d like to pursue an Olympic dream that I have after I’m done at Alcorn, first and foremost,” Robinson said. “If it doesn’t work out for me, I plan to enroll in physical therapy school and run my own business as a physical therapist.”