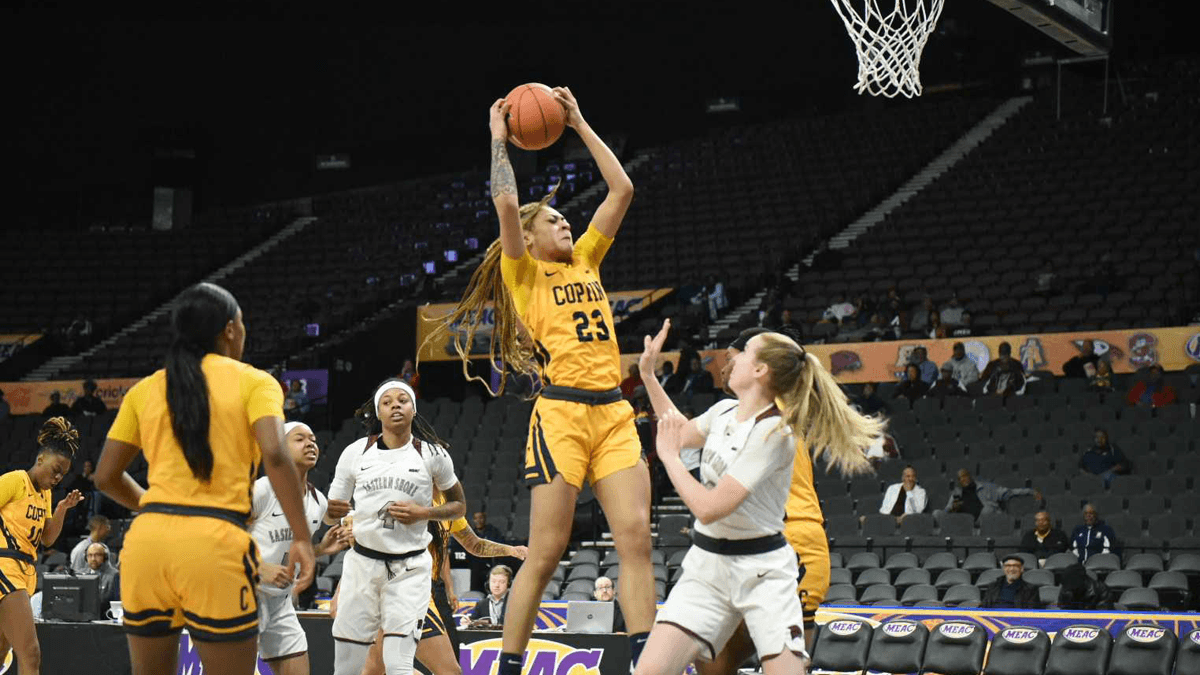 The Hawks advance to take on Bethune Cookman

NORFOLK, Va., March 10, 2020–Mya Thomas scored a game-high 21 points and Brooklyn Bailey tallied nine of her 11 points in the fourth quarter as Maryland Eastern Shore pulled away to 62-50 victory over Coppin State in the opening round of the Mid-Eastern Athletic Conference (MEAC) Basketball Tournament at the Scope Arena on Tuesday.

The Hawks (9-21), the No. 8 seed, advanced to the quarterfinal against top seed Bethune Cookman on Wednesday at 12 p.m.

The game was a close contest between the two teams until the Eagles (3-26), the No. 9 seed, opened the game’s biggest lead at the 5:48 mark of the second quarter. The charge was led by Jalynda Salley’s 15 points on 6-for-10 shooting from the floor.

But the Hawks closed out with a strong run to trail 32-26 at intermission.

UMES began the third period with aa mini 10-7 spurt to take 38-35 lead at the 6:26 mark. But the Eagles countered and there were four lead changes and two ties until the Hawks took control to take a 49-44 lead on some 3-point shooting.

The momentum carried over into the fourth period, as the Hawks went on a 21-12 run, featuring three of their four baskets from beyond the arc to open a 54-44 lead at the 7:54 mark.

Coppin State was able to reduce the deficit to 54-50 on a Chance Graham free throw. But the Eagles failed to score the rest of the way, turning the ball over on five of its six possessions at one point and failing to convert on some close-in shots.

UMES closed it out with five different players contributing to the last eight points.

Bailey contributed 11 points to the win while Amanda Carney scored 10 off the bench.

Coppin State was led by Salley with 17 points, while First Team All-MEAC selection Chance Graham finished with a double-double of 12 points and 12 rebounds.