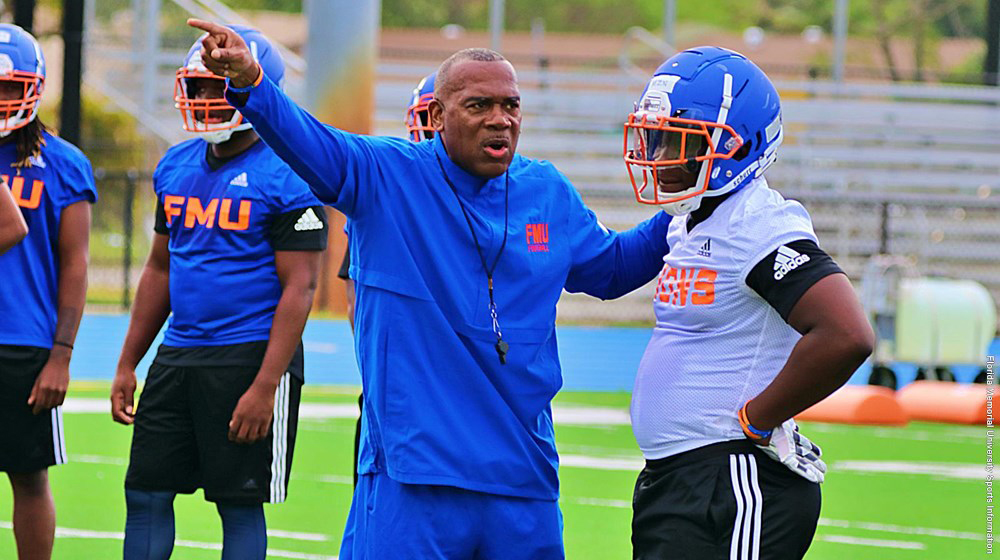 Florida Memorial football is back and now we know their schedule

For the first time in nearly 62 years Florida Memorial was back on the football field with spring practice.

MIAMI GARDENS, Fla. – Florida Memorial University’s rebirthed football program made history Monday, hosting its first spring practice since its nearly 62-year hiatus, but it also made a big splash by releasing its 2020 football schedule in a special ceremony at Betty T. Ferguson Park.

Following the first of what will be 15 official spring practices, FMU Athletic Director Ernest T. Jones unveiled the Lions’ 10-game slate and addressed gathered media and a large group of Florida Memorial supporters.

Jones also spoke of a possible addition of an 11th game for the Lions Monday, saying that it would be a “special game versus a Division-IAA HBCU, at their place”.

Florida Memorial’s 2020 football season – which is evenly split with five home games and five road games – will begin with a home game, as it hosts Reinhardt University on August 29th. The Lions, who will host all of its spring practices at Betty T. Ferguson, plan to play its fall home football games at the newly renovated Nathaniel “Traz” Powell Stadium.

It will be a tough test right out of the gate for FMU, as Reinhardt has won 34 of its past 37 games and will likely begin the 2020 season ranked in the National Association of Intercollegiate Athletics (NAIA) top 20. The tilt with the Eagles will also be Florida Memorial’s first game against a Mid-South Conference opponent.

The Lions will hit the road for the first time a week later when they travel to Columbia, Kentucky to take on Lindsey Wilson College. It’ll be another tough test for the first-year program, as the Blue Raiders finished the 2019 season 12-1 after being knocked out in the semifinals of the NAIA FCS playoffs.

“I really appreciate the schedule. We want to play the best,” Harris said. “We want to put ourselves in position to train and compete with the best in country because that’s who were and that’s what we do. Then when it all clicks, it will elevate the entire university.”

FMU returns home on September 12 when it will host HBCU rival Edward Waters College in what will be the inaugural “Big Cat Classic” and Florida Memorial’s only non-conference game in 2020. As the Lions and Tigers do battle on the gridiron for the first time, Florida Memorial will also be honoring its student-athletes that earn Athletic Director Honor Roll honors.

Florida Memorial will have a bye week (Sept. 19) following its showdown with Edward Waters, giving the team an extra week to prepare for the back-to-back road trips coming in the following two weeks. The Lions will travel to Tennessee – its final out-of-state road trip of the season – to face another perennial NAIA power in Bethel University on September 26th then make a trip to Babson Park, Florida to take on Webber International University.

The Lions will have another set of road games in consecutive weeks on October 17 (at Warner University) and October 24 (at Keiser University) before its second open week of the season.

The final two games of the Lions’ season will be played in the friendly confines of its home stadium. Ave Maria University will come to town for a November 7th meeting and FMU’s regular season will conclude with a November 14 showdown with Southeastern University.

Both of the November games will have special promotional themes; the Nov. 7 game will be a “Black Out” game and the Nov. 14 game will be Florida Memorial’s “Senior Day” as well as “Armed Forces/Community Day”.

Despite the toughness of the Lions’ schedule, Harris reiterated his confidence in his team’s ability to succeed by telling a story of his time at the recent Mid-South Conference coach’s convention.

“At the coach’s convention, I made sure I followed and sat next to the five head coaches – who have all been [named] Conference Coach of the Year at some point – of the teams that are on our home schedule,” said Harris, a three-time winner of the Florida Dairy Farmers Coach of the Year Award and 2007 USA Today National Coach of the Year during his tenure as the head coach of Miami Booker T. Washington High School.

“I sat next to a different one every day because I wanted to make sure that they know that I’m not going anywhere and that I will be right there in their chest. And that there will be no fear in Florida Memorial University.”

Florida Memorial football is back and now we know their schedule