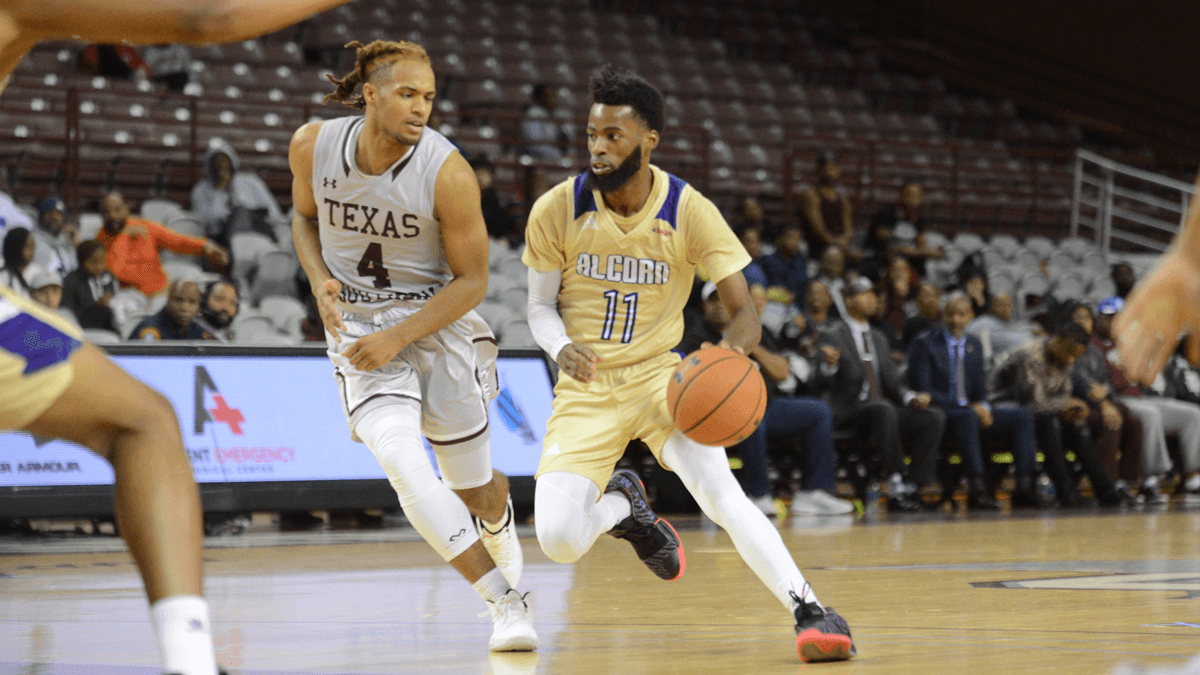 Braves go wire to wire with home win over the Panthers.

With the win, Alcorn (14-14, 10-7 SWAC) moves into a three-way tie for fourth-place with Grambling State and Jackson State. The Braves would currently be the No. 5 seed, but still have a chance to move up to play a first-round game at home in the SWAC Championships.

The Braves got off to a strong start and used it to maintain control for nearly the entire 40 minutes. They led 18-4 after the first five minutes, and withstood a run by PVAMU (18-12, 14-3 SWAC) midway through the second half that made it a one possession game.

Alcorn made eight of its last nine free throws in the final minute to seal it.

Senior Maurice Howard netted a game-high 22 points and was a perfect 11-for-11 from the free-throw line. Junior Troymain Crosby also turned in a big night with 19 points and nine rebounds.

The Panthers were carried by Devonte Patterson who registered a double-double of 33 points and 10 rebounds as he drew eight fouls. Darius Williams scored 16 points off the bench.

The Panthers made a run at the end of the first half to cut into the deficit. They went on a 13-5 spurt, which included a “banked” three-pointer near half-court at the buzzer by Chancellor Ellis to trail 38-30 at the intermission.

Though, that was the closest PVAMU would ever get. A three-pointer by Andrews quickly put the Braves back up by six, and a fast-break lay-up by freshman Dominic Brewton made it a 58-50 game at the 7:51 mark.

A three-pointer by Tillery and two free throws by Brewton extended the advantage to 70-57 with 3:09 left. PVAMU hit some three-pointers in the last couple minutes, but the Braves were efficient at the free-throw line to keep the game out of reach.

The Braves will wrap-up the regular season Saturday at 5:30 p.m. against Texas Southern on Senior Day. Alcorn won the first meeting 95-80 on the road. It was TSU’s only home loss of the year.

– The Braves have won 12 of their last 14 home games. Alcorn has outscored the opposition 996-793 at the Davey L. Whitney Complex this season.

– Alcorn head coach Montez Robinson is in his fifth season at the helm and carries a 49-40 SWAC record.

– The Braves entered the game ranked 27th in the nation in threes made per game with 9.3 and were right on par with nine made in the game. Tillery and Howard drilled three apiece.

– Howard submitted his 64th career double-figure scoring game and 20th this year. It was also his 13th career 20-plus outing and fourth this season. By going 11-for-11 from the free-throw line, he’s now shooting a team-high .861.

– If the season ended today, Andrews would break the single-season three-point percentage record in Alcorn history with a league-leading .472 clip. He recorded his 32nd career double-figure scoring game and 20th this year.

– Tillery is ranked No. 2 in Alcorn single-season history in three-pointers made with 83. He’s chasing Howard’s mark of 95 made last season. Tillery etched his 20th double-digit scoring outing of the year.

Quoting Alcorn head coach Montez Robinson
Opening Statement
“We stayed consistent on both ends tonight, and that’s something we talked about pregame. We didn’t have any big letdowns. One of the things we kept telling the guys at the timeouts was that we couldn’t let multiple guys beat us. They had one guy get it going, but one guy wasn’t going to beat us tonight by himself. Patterson had a great game, and he made a lot of tough shots with us draped on him. He made some unbelievable plays, and that’s what a guy of his caliber can do to you. I’m really proud of our guys and the effort they put forth on both ends of the floor and the way they executed the game plan.”

On making a season-high 27 free throws
“We are a good free throw shooting team. It was uncharacteristic of us to miss so many in our last game against Southern. We went into this game wanting to win a lot of wars – we wanted to win the rebounding war, the 50-50 battles, the turnover battle and to stay aggressive and get to the free-throw line more. We knew we had to win three out of four of those categories to give ourselves a good chance to win the game. We accomplished that and stayed locked in.”

On getting off to a fast start
“I was just proud of the execution. I thought all of our coaches did a great job of calling out the schemes and helping our guys stay the course. We stayed locked in and I was proud of that.”

On Troymain Crosby
“He played with a lot of aggression early on. We had to take him out midway through the second half because of foul trouble, but that’s just due to the way he plays. It worked out because he needed some time to rest – he played over 34 minutes tonight. He came back in and finished the game strong. It was a task for all of our guards to play defense and stop them when they were coming down the court at full speed. We stayed active defensively and got our hands on a lot of balls.”

235
The Latest in HBCU Sports and Culture