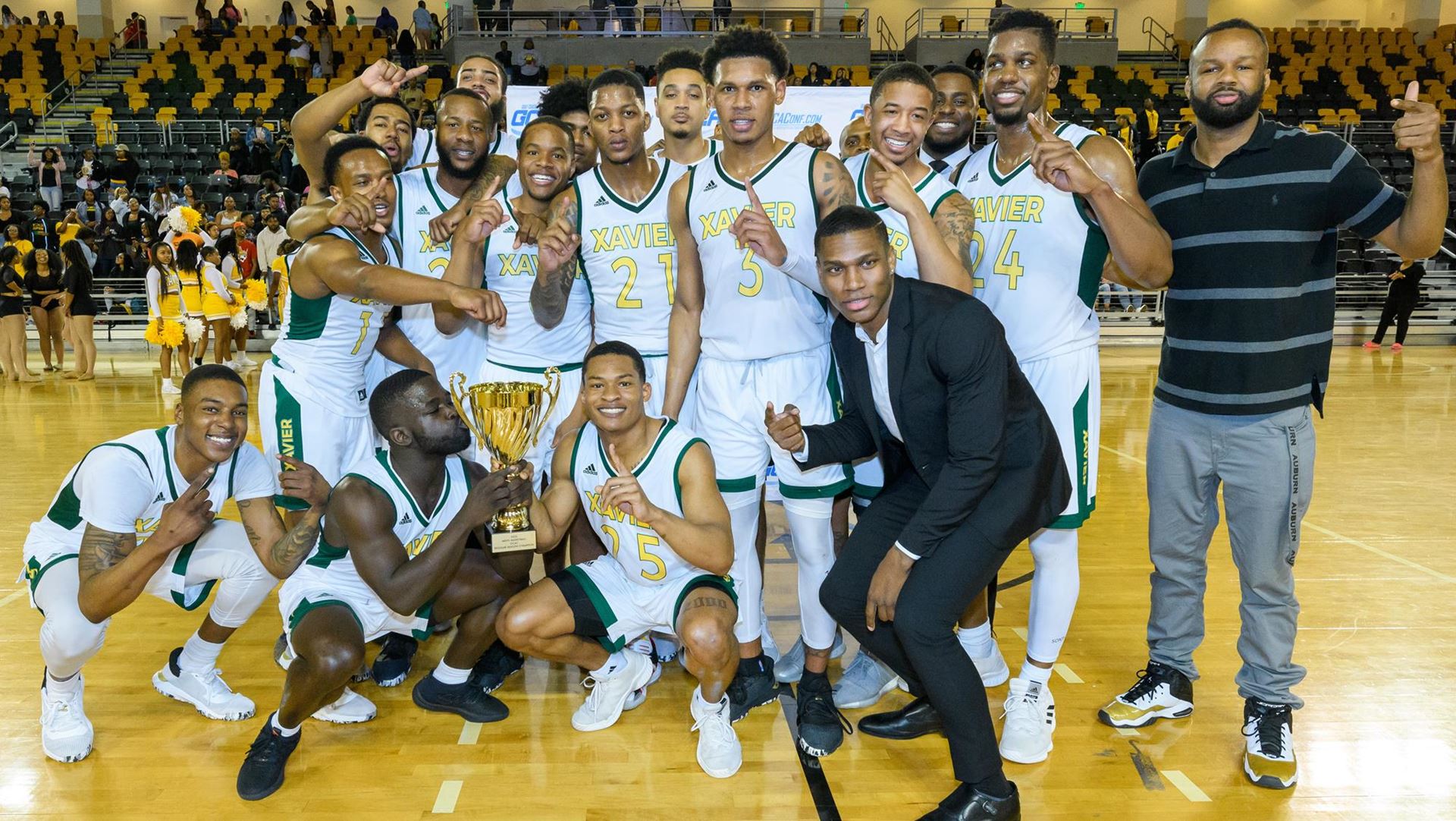 Regular season title is the 12th in school history, most ever in the league

Mart, a heralded junior, looked like the most experienced player on the floor. He produced 6-of-6 free throws and two steals in the final 5 1/2 minutes to help the NAIA No. 15 Gold Rush emerge with a 69-65 victory against 12th-ranked Tougaloo that gave XULA the Gulf Coast Athletic Conference regular-season championship.

“Rayshawn Mart has gotten better and better since he’s been here,” XULA head coach Alfred Williams said of the 2017-18 GCAC Freshman of the Year and honorable-mention NAIA All-American of last season. “Don’t know where we would’ve been without him tonight.”

The XULA men know where they’ll be Wednesday: back at the Convocation Center as the GCAC Tournament’s No. 1 seed in a 6 p.m. first round/quarterfinal matchup with eighth-seeded Rust (3-27). XULA will be the site of all semifinals and championship games for men and women Saturday and Sunday.

“The atmosphere was great tonight,” said XULA senior forward William Loyd, who scored all 14 of his points in the second half. “The fans came out. They were loud. It was great to win a title for them and for Xavier. This is what we’ve been working for since the summer. All those early-morning and late-night practices. They paid off.”
Reminded that the Gold Rush have not won the GCAC Tournament since 1996, Loyd said, “Time to turn it around. This is our year.”

The game included seven ties and 18 lead changes. There were 13 second-half lead changes, the last at 1:36 when Mart made both ends of a 1-and-1 to give the Gold Rush a 66-65 advantage.

Tougaloo’s final four possessions went this way:
•  Makye Richard blocked a Williams shot, and Jerry Gibson rebounded for XULA at 1:20.
•  Mart stole the ball from Justin Johnson with 45 seconds remaining.
•  Gibson rebounded LaGarious White’s 3-pointer — it would have tied the score — with four seconds remaining.
•  A missed desperation 3 from midcourt after Gibson made 1-of-2 free throws for the final point and a two-possession lead.

“We dug in and battled all night and made key plays when we needed them,” said Williams, whose team lost 64-63 at Tougaloo Feb. 8. “This is a game our guys will remember the rest of their lives.”

After Mart’s final free throws, XULA scored with 16 seconds remaining when 5-foot-8 freshman TJ Jones penetrated the lane for an off-balance layup that beat the shot clock and gave XULA a 68-65 advantage.

“TJ comes from a state-championship program at Lafayette Christian,” Williams said. “He’s not afraid of moments like these.”

Virgil Davison scored all 10 of his points in the first eight minutes to help XULA build an 18-8 lead. But Tougaloo, led by Ledarius Woods, rallied to take a 36-35 halftime lead. Sean Atwater made two 3s in the final 36 seconds of that half for Tougaloo, the second one at the buzzer.

Tougaloo took its largest lead, 46-41, with 16:55 remaining when Woods made his fifth 3-pointer. But Woods, who had game highs of 22 points and eight rebounds, never scored thereafter. The rest of his evening consisted of two turnovers, one rebound, three fouls and no shots attempted. He wasn’t in foul trouble; he committed his third with 4:22 remaining.

Richard had nine points, seven rebounds, four assists, one block and one steal for XULA, and Gibson had six rebounds and two of XULA’s season-high-tying five blocks. Mart, Davison and Ed Carter made two 3-pointers apiece.

Atwater had 15 points and six assists for the Bulldogs, who won the GCAC regular-season and tournament titles last year, and Stanley Williams scored 12.

The other GCAC Tournament Wednesday matchups: No. 7 SUNO at No. 2 Tougaloo, No. 5 Dillard at No. 4 Edward Waters and No. 6 Philander Smith at No. 3 Talladega.

718
The Latest in HBCU Sports and Culture