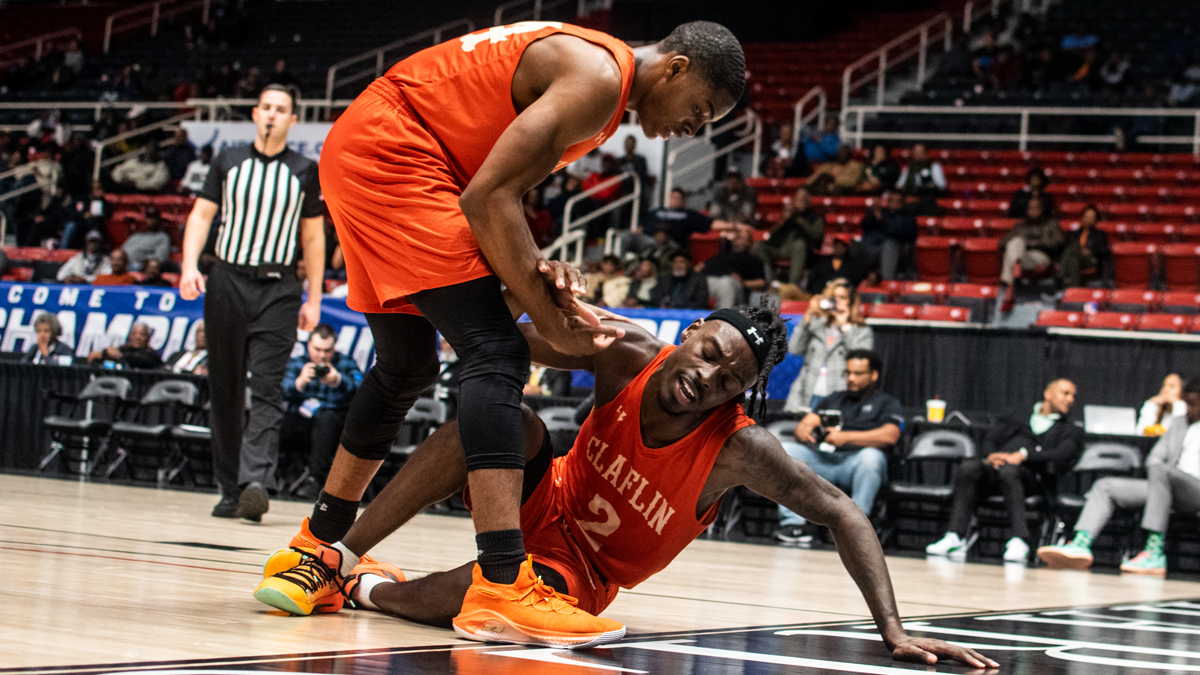 Claflin and St. Aug set the table for a full slate of men’s hoops in the 2020 CIAA Tournament on Wednesday in Charlotte.

CHARLOTTE,NC–The 75th men’s CIAA basketball tournament got off to a solid start on Tuesday night, setting the stage for a big-time Wednesday featuring four games.

St. Augustine’s University got off to a fast start, dug itself a hole and climbed out of it, beating Lincoln University 66-61.

SAU led by as many as 13 points in the first half, but found itself down 10 with 5:14 remaining in the game. It finished strong, picking up the win and earning itself a date with hometown favorite, Johnson C. Smith on Wednesday.

JCSU, the top seed in the south, will face a St. Aug team that it beat twice in the regular season, however, neither of those wins were easy. It will try for a third win this season over fourth-seeded St. Aug. Gametime is set to tip-off at 8:50 PM.

Wednesday’s action tips off at 10 AM for the men as two CIAA South teams battle it out. Third-seeded Fayetteville State will take on seventh-seed Shaw. FSU swept the season series against its nearby rival, who went winless in the division.

The game will feature two of the more versatile scorers in the conference as Shaw’s Grayson Kelley (19.3 ppg) looks to lead his team to an upset over Jalen Seegars (16.4 ppg) and Fayetteville State.

The most-anticipated matchup of the day will likely be the noon matchup between Livingstone and Bowie State. Both teams were favored to win their respective divisions, yet both find themselves facing the daunting task of having to win three games in a row to get to the CIAA Tournament.

Livingstone is led by CIAA Player of The Year Roger Ray (23.8 ppg, 5 app) who has carried the load on offense, but will need more help if his team is going to make a serious title run.

Bowie State, meanwhile, lacks a superstar but has several capable scorers in Cameron Hayes, David Belle, Juwan Smith and Saiquan Jamison all average between 13.7 and 10.3 ppg.

Claflin needed overtime to advance to the quarterfinals, as it outlasted Elizabeth City State in Tuesday’s nightcap in a 70-60 overtime game.

Justin Faison poured in 29 points for ECSU, but Claflin jumped ahead early in the extra period and ECSU wasn’t able to mount a comeback.

The win was Claflin’s first-ever in the CIAA Tournament. Its reward— a date with the defending CIAA Champion Virginia State at 6:30 PM on Wednesday night.

VSU finished the regular season 19-8, 12-3 in the CIAA. Two of those CIAA wins came against Claflin. Like BSU, VSU doesn’t have a go-to-player, but it does have several players capable of hurting you in multiple ways.