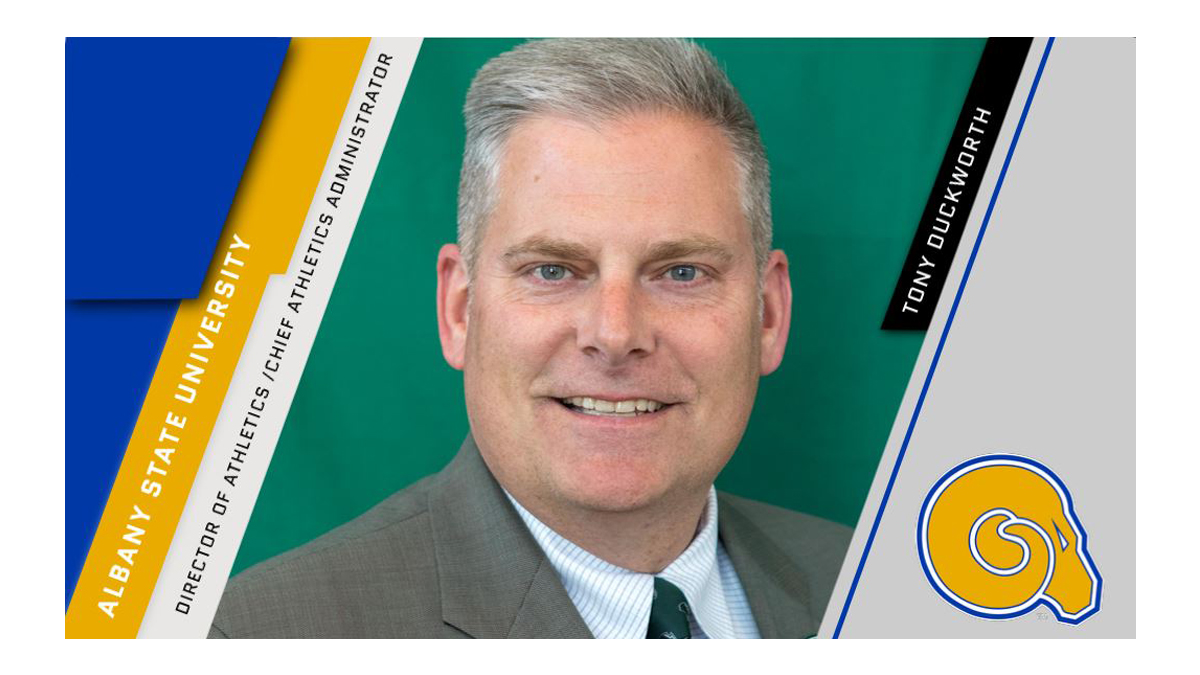 Albany State has a new leader in charge of its athletics program.

“After an extensive and collaborative search, I am pleased to announce Mr. Duckworth’s selection as Athletics Director/Chief Athletics Administrator. He joins us with 27 years of athletics experience. Throughout his career, he has shown a proven track record of excellence in leadership and performance. His years of experience in athletics leadership, coaching and fundraising provide a strong foundation for the department. I look forward to strengthening our athletics program for our students, staff, coaches and fans of Golden Ram athletics,” said ASU President Marion Ross Fedrick.

“I also extend a special thank you to Jackie Nicholson for her leadership as interim Athletics Director. Ms. Nicholson worked in multiple capacities during the last several months, and I appreciate her dedication to Albany State University, our student-athletes and our coaches. Her unwavering leadership and support were critical throughout the process. Ms. Nicholson will continue to serve as interim Athletics Director through the remainder of the fall 2019 semester.”

Prior to his appointment, Duckworth served as Director of Athletics and Chief Athletics Officer at Northeastern State University (NSU) in Tahlequah, Oklahoma since 2011. He led the final year of transition into the Mid-America Intercollegiate Athletics Association. His teams won 13 MIAA championships and had 35 championship or runner-up conference finishes. Duckworth’s teams also enjoyed 32 NCAA playoff appearances during his eight and a half year tenure at Northeastern State University. NSU sponsors ten NCAA Division II sports.

Duckworth led multiple capital improvements at NSU, including the $18 million event center, a turf and video board replacement and a stadium sports medicine center and locker room renovation.

Additionally, he has served as Director of Athletics at Maryville University, where he led Maryville through a significant transition as the university reclassified from Division III to Division II. He has also served as Head Men’s Basketball Coach and Associate Athletics Director at Huntingdon College, Head Basketball Coach at Belhaven College, and Assistant Men’s Basketball Coach and Recruiting Coordinator at Covenant College. Mr. Duckworth also has international head coaching experience, having led two American All-Star teams to compete overseas in Costa Rica.

“I am thrilled to join the Albany State University family and Golden Rams Nation. During my visit to Albany, I was so impressed with the campus, the home football game day environment and the community. Members of the search committee and campus community were so hospitable and welcoming. I look forward to being part of the great institutional and athletics traditions of ASU,” Duckworth said. “I would like to personally thank President Fedrick for entrusting me with the leadership role of the ASU Department of Athletics. I look forward to partnering with her, campus leadership, athletics personnel, alumni and other stakeholders on maximizing the potential of Golden Rams Athletics. I would like to acknowledge Jackie Nicholson for her leadership throughout the Fall 2019 semester. I look forward to working with her, the administrative staff and coaches as we strive to provide a first-class ASU student-athlete experience.”

A Macon, Georgia native, Duckworth earned a bachelor’s degree in financial management from Bob Jones University and a Master of Education degree from the University of Tennessee – Chattanooga. He is a current member of the eight-person NCAA Division II National Men’s Basketball Committee.