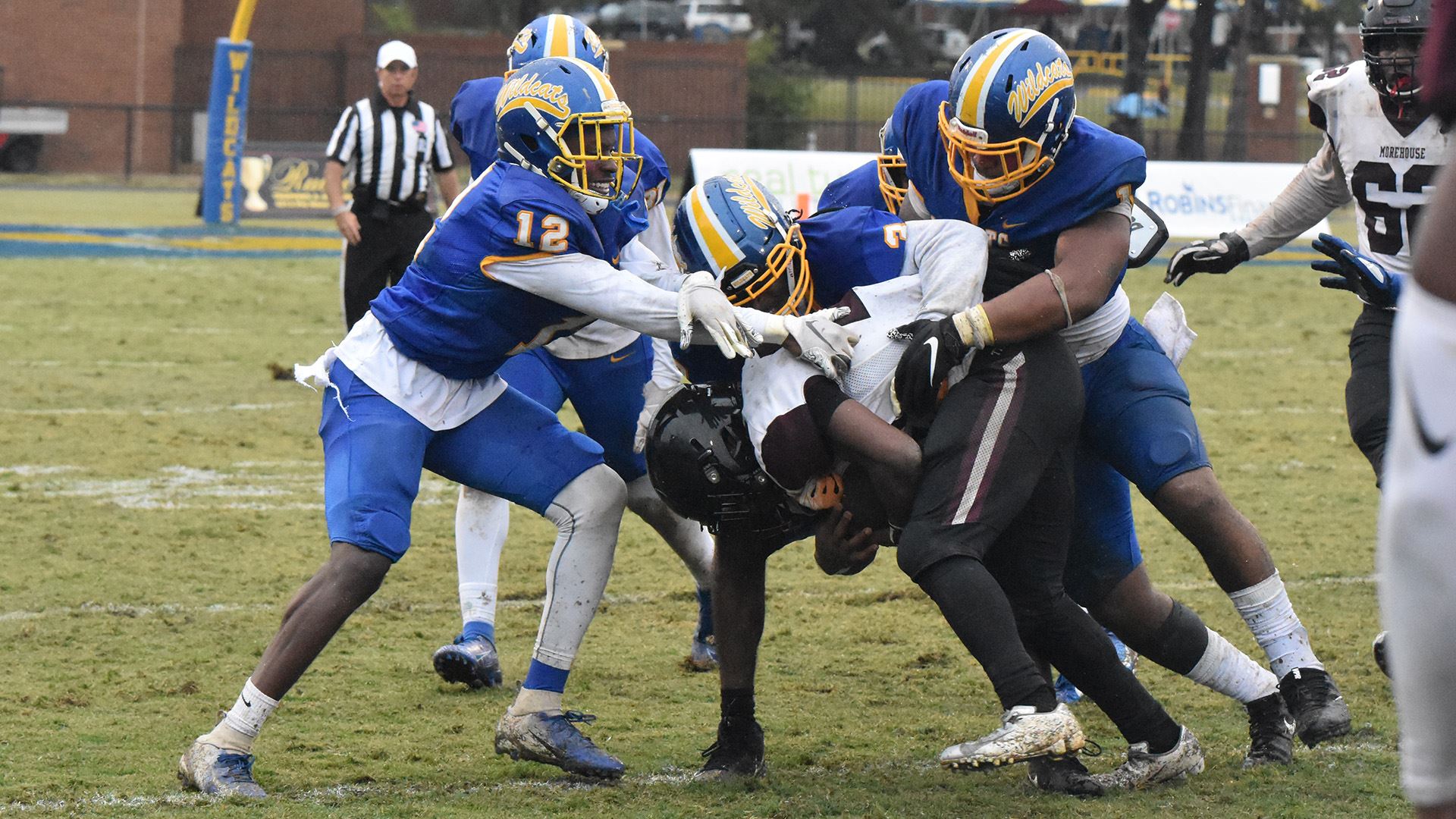 Wildcats do something they haven’t done since 2012

FORT VALLEY, Ga. – As Tropical Storm Nestor blew in for Saturday, the Wildcats rode its wave of precipitation successfully for their fifth victory in a row. Fort Valley State found the end zone on its first three offensive possessions and saw its defensive unit record the best performance in over two years of a 37-21 win over Morehouse College.

Starting its Homecoming contest, the Wildcats (5-2/3-0 Southern Intercollegiate Athletic Conference East) put 20 points in the 12:04 of the day on a pair of Slade Jarman passes and a 13-yard Jamari Clark run. The FVSU defense took over from there as it allowed Morehouse (2-5/0-3 SIAC East) only 128 yards and two field goals.

The FVSU victory was the program’s fifth-straight and the squad’s first 5-game win streak since the 2012 campaign where the fourth win of that run was over Morehouse.

Leading the home defense, the Wildcat defensive end bookends – Jahseari Patterson and Demetrius Harris – dominated the line. The duo combined for 16 tackles, nine sacks, 10 tackles for loss, two forced fumbles, three fumble recoveries as they scooped up each other sack fumbles and five quarterback hurries. Patterson had two more tackles, one more forced fumble and one more quarterback hurry with both accounting it for 4.5 sacks and 5 tackles for loss each.

Linebacker Aaron Dore would have been a defensive star any other game with nine tackles, 3.5 tackles for loss and a sack.

Offensively, Jarman had an off day by his season measuring stick. The senior passed for 250 yards on 20 of 38 attempts with two touchdowns and an interception. Slade surpassed his season total for passing yards and touchdowns as he now stands at 1,879 yards and 17 touchdowns.

Wideout Jeffery Mack posted the biggest day of the Wildcats receivers with four catches for 107 yards, including a 47-yard score to open the afternoon. Shemar Bridges pulled in three grabs for 84 yards. Kentavious Thomas plunged in from a yard out for the last home score of the day and his first as a Wildcat.

Linebacker Jonathan Mathis paced Morehouse with 10 tackles, two sacks, three for loss, a blocked punt, which was returned for a touchdown and one pass breakup.

On the first possession of the day, the Maroon Tigers went for it on a 4th-and-1 from their own 49-yard only to see Majeste Hansberry and Dore stuffed Santo Dunn in the backfield. Jarman needed only three plays to hit Mack from 47 yards.

Following a visitors punt, Jarman engineered a 97-yard, 12-play drive for the second score when he hit Griffin Watley from nine yards out.

Kicker Eli Mashburn’s squib-type kick-off hit off a Morehouse up-man and Kei’Jne Thomas recovered for the Wildcats. Five plays later, Clark took the handoff and powered straight up the middle from 13 yards for the touchdown and 20-0 lead with 2:56 on the clock. FVSU defense held Morehouse without a first-quarter first down.

The Wildcats enjoyed their largest lead of the day when Patterson sack and fumble of the Maroon Tigers quarterback and Harris scooped and ran the 22 yards for the score and 37-6 advantage with 8:40 remaining.

Morehouse did use a block punt return touchdown and a 63-yard interception return for another score to make it 37-21 at 7:42.

With the ball at the home 37-yard line with 5:13 on the clock, the Morehouse attempt for more was halted for three hours. The game was stopped when lightning from Nestor made its way to the Fort Valley area.

Following the delay, both teams fumbled and lost once apiece, but the score did not budge from 37-21 FVSU.

FVSU starts a three-game road trip to finish the regular season starting next Saturday, Oct. 26, at Clark Atlanta. Kick-off is set for 1 p.m.