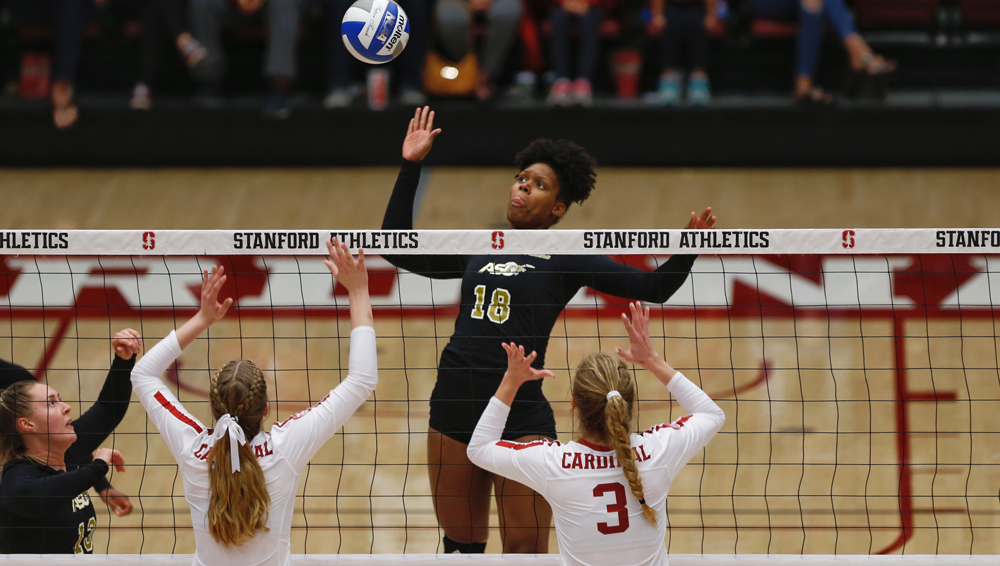 Candace Martin was a standout volleyball player at ASU.

MONTGOMERY, Ala.- Former Alabama State student-athlete Candace Martin has been named the 2018-19 Southwestern Athletic Conference Woman of the Year while also becoming a nominee from the conference for the NCAA Woman of the Year. Martin was selected based on the recommendation of the SWAC Woman of the Year selection committee which consists of four league Senior Woman Administrators (SWA).

“We’re very pleased to accept recommendation of the committee naming Candace Martin as the SWAC Woman of the Year,” said SWAC Commissioner Dr. Charles McClelland. “The impact she has had on our conference extends well beyond her accolades on the court. Candace consistently sought to raise the bar and to be an example for today’s youth along with her fellow peers. We’re a better conference today because of her many contributions while serving as a brand ambassador and student-athlete at Alabama State University.”

“Candace is the epitome of what our student-athletes at Alabama State are and the approach we take every day with them on our campus,” Alabama State Director of Intercollegiate Athletics Jennifer Lynne Williams said. “She has worked extremely hard to get to where she is at, and this award is a tremendous honor for her.

“Candace never backs down from a challenge whether on the court in a match, or in the classroom. To be able to volunteer for as many activities as she does, to intern each summer and to maintain her academic status at this university is a testament to her beliefs and work ethic.”

Over her career, Martin helped Alabama State to two perfect seasons in conference play (40-plus consecutive victories against conference opposition) and four NCAA tournament appearances. She was also named a team captain during her time at Alabama State, was named to the SWAC All-Academic Team each year and was named All-Conference her final two years at the school.

But it wasn’t always what she did on the court that she will be remembered by at Alabama State and in the Southwestern Athletic Conference. The Alabama State graduate was the Student-Athlete Advisory Committee (SAAC) President at the school, and she was also named the SAAC President of the conference – becoming the voice for all the student-athletes in the conference.

Martin earned an NCAA Post Graduate internship beginning this summer and running through 2020, she was named to the Dean’s List each semester from Spring 2015 until graduation, received the President’s Award in December 2018 and was inducted into the Epsilon Tau Sigma Honor Society in the Fall of 2017.

“If there’s anything I’ve learned during my experience as a student-athlete, it’s that true leadership is more about inspiring others to not only meet your level, but also helping them believe that they can eventually surpass the example you set for them,” Martin said. “Thanks to the priceless moments and opportunities provided to me by Alabama State University, I know that I have a story to tell, and it will inspire young women – some who may have little hope as I once did.”

Not only did Martin accomplish all her feats on the court and in the classroom, she also reached out and applied for internships. Some of the internships that she has, or will, participate in include the NFL Careers in Football Forum (December 2016 / December 2017), an internship with several departments within athletics at Alabama State, the United States Olympic Committee (USOC), and Fostering Inclusion through Education and Leadership Development (Summer 2018).

She was also instrumental in the volleyball program becoming a member of Team IMPACT and inviting Mollie Preston on to campus to be a member of the team. Team IMPACT is a national nonprofit headquartered in Boston (Mass.) that connects children facing serious or chronic illnesses with college athletics teams, forming life-long bonds and life-changing outcomes.

“I know what it means to be a positive role model for young women, and I don’t take that responsibility lightly,” Martin said. “While I’m so appreciative to have earned experience with the United States Olympic Committee, Minor League Baseball, the Southwestern Athletic Conference and starting this summer the NCAA…what matters most is inspiring those who may want to walk in my shoes but need that extra push. To me, that’s my calling; to be the extra push. Because we can always do more than we think, and I’m living proof of that.”

A record 585 female college athletes have been nominated by NCAA member schools for the 2019 NCAA Woman of the Year Award. Established in 1991, the NCAA Woman of the Year award recognizes graduating female college athletes who have exhausted their eligibility and distinguished themselves in academics, athletics, service and leadership throughout their collegiate careers. The nominees competed in 23 different sports across all three NCAA divisions, including 262 nominees from Division I.