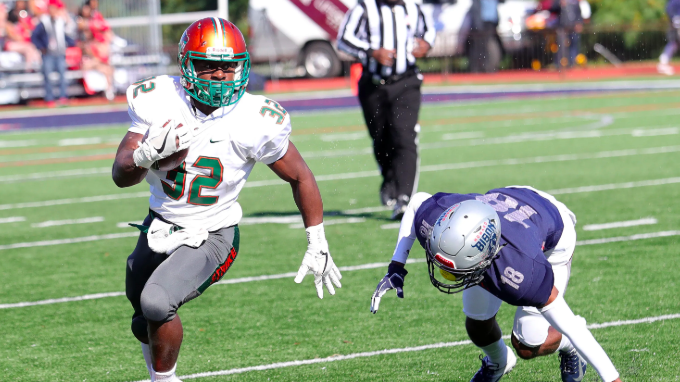 Deshawn Smith and Bishop Bonnett are looking to strike once again in 2019 as FAMU tries to get back on top in the MEAC.

We are highlighting the top MEAC running backs as we countdown to the start of the 2019 Football season! Deshawn Smith and Bishop Bonnett are tied for fourth and this duo are one of best RB pairings in the conference.

Ryan Stanley torched MEAC defenses all season, throwing for over 2500 yards in the process. But his running back duo played a huge role.

Deshawn Smith rushed for 640 yards on 96 carries last season. He added four touchdowns on the ground. Bishop Bonnett rushed for 533 yards on 74 carries. With defenses focusing on Stanley and his Rattlers receivers, that left room for the Smith-Bonnett connection to gain massive yards when needed.

Their NC Central blowout win was an example of this. Smith busted open a 61-yard run through the Eagles defense. Bonnett did the same, but for a tune of 69 yards. Yes it was a blowout but Ryan Stanley attempted a season-low 18 passes all game, his duo can set the tone; making things easier for their flashy offense.

Both backs averaged over six yards a carry last season, putting them near the top of the MEAC. What’s amazing about this pairing is that their stats are almost even and their workload is spreadout. Both players are explosive and compliment each other well.

FAMU can’t make it to the postseason this year due to NCAA violations, but it can claim the MEAC title and try to re-establish itself as a top contender in the MEAC. If it does, this talented backfield will have likely played a major role.