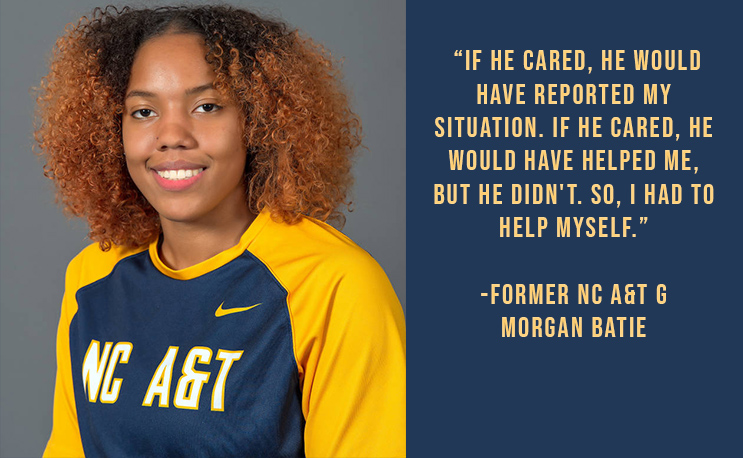 For the second time this year, North Carolina A&T coaches are accused of failing to report sexual assault allegations.

North Carolina A&T’s athletics department is dealing with a new allegation of failing to report a sexual assault.

Former women’s basketball player Morgan Batie said some of her coaches did nothing after she confided in them that she had been sexually assaulted last summer, violating Title IX. She also accused an unnamed coach of being verbally abusive and said she wants an apology as well as two of the coaches to resign.

“I told {one of my coaches} about the assault and everything, and she was like, vague,” Batie told WFMY. “She was like sorry that happened to you basically, she said ‘you need to get help’ but they didn’t really help me or offer me guidance or anything.”

Batie claims she was assaulted in June but told her coaches in December. Title IX requires reports of sexual assault to be made within 24 hours.  She eventually ended up quitting the team and reporting the incident to Title IX in April.

“We cannot speak to individual investigations involving students, or employees, due to federal and state laws that protect their confidentiality,” the NCAT Athletics Department said in a statement.

She claims one of the coaches was also verbally abusive. She accused the coach of shaming her for her weight, which she claims led to her quitting the team early last season.

“He calls me fat, he calls me dumb, stupid, and idiot,” Batie said.

A Title IX investigation found that while the coach did use profanity, it was unable to determine use of language to demean or shame players.