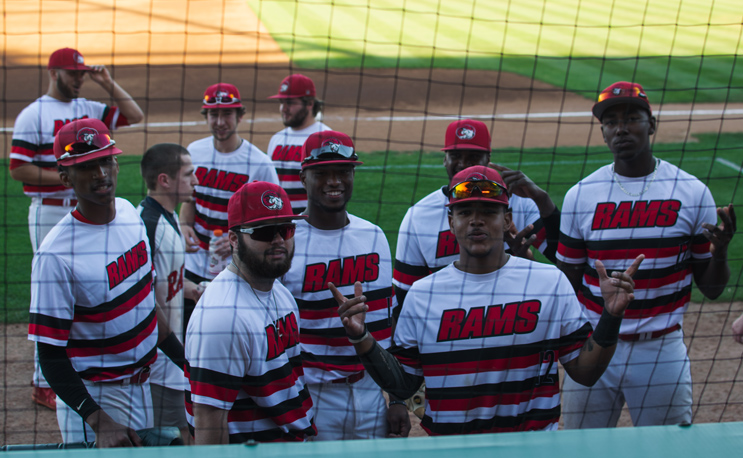 Winston-Salem State’s baseball had 300 plus wins in nine years, dominated the CIAA and regularly beat PWIs. And now, it is gone.

The record will show that April 23, 2019 was a picture perfect atmosphere for baseball. The sun hung high and held on long, keeping the temperature over 70 degrees as dusk settled into the cracks and crevices of downtown Winston-Salem. It was a beautiful night for a memorial service.

A few hundred fans made their inside the shadow of a stripped Interstate Business 40 to pay their respects to the fallen. There were no suits or dresses inside BB&T Ballpark on Tuesday night, just ball caps and shorts. Friends and family were there to reminisce about the good times and even some of the bad ones. Yes, there were moments of joy and laughter, but ultimately the time to say goodbye eventually came.

Winston-Salem State baseball hosted its final home game of the 2019 season on Tuesday, and very likely its last home game ever. WSSU fell victim to a five-run second inning by Catawba and never recovered, losing the game 7-2 to the private school from nearby Salisbury. The loss of the game itself wasn’t crushing. The loss of the program was one that will sting for a long time for many of the players, coaches, alumni and fans of a program that came out of nowhere to become one of the jewels of HBCU baseball and a program on the brink of historic NCAA success.

Rams In The Bush

WSSU’s baseball program emerged out of the ashes of the school’s failed attempt to move up to Division I. Adding baseball was part of its return back to the CIAA after flirting with the MEAC, so the program was rebooted nearly 40 years after it ended.

Kevin Ritsche, who was already teaching at the school, was tasked with bringing the program together. What he did was nothing short of spectacular, as the Rams dominated the CIAA from joining the league in 2011 until 2017, winning six out of seven league crowns and representing it in the NCAA Tournament. Ritsche’s Rams weren’t just “CIAA/HBCU good,” they nearly made the D2 World Series in 2017 and have won more than 300 games in nine seasons.

“Every year we put together a quality program out here that competed for a chance to move on and play in the NCAAs, and you know we knocked on the doors of the World Series a couple of times. That’s something that really sticks out to me,” Ritsche said.

Just as WSSU was beginning to fashion itself into a national power, the rug was pulled out from under it. First the CIAA dropped baseball as a championship sport following the 2017 season, forcing teams to either join other conferences, play independently, or drop the sport all together. WSSU continued to play as an independent team in 2018 and was doing so in 2019 when the school announced in March that it would be “re-aligning” its athletic department and replacing baseball with golf.

The announcement understandably upset the players and coaches and sparked outrage by supporters online. A GoFundMe was set up to try to raise money to keep the program, but eventually it was shut down.

The players on the diamond weren’t the only ones in WSSU uniform. Ritsche said that 20-25 alumni that came out to witness the program’s final home game.

“It’s kind of special because you get a chance to understand that those guys…they still think that this program means something to them,” Ritsche said.

Michael McNamara was one of the alumni who came to say goodbye. He had never heard of Winston-Salem State before Ritsche offered him a chance to play baseball.

“Coming to Winston-Salem State and playing baseball gave me a second opportunity to play NCAA baseball,” McNamara said. “I came from a junior college in Scottsdale, AZ and Coach Ritsche gave me a chance to play that I otherwise would not have had.”

McNamara said he learned a lot on and off the field at the HBCU.

“Different cultures, different ideas,” McNamara said. “Coming from the West Coast to the East Coast, you learn a lot. I learned how to be myself, away from my family and just live my own life.”

Former third baseman Emilio Abru came to WSSU from a JUCO in New Jersey. He played for the Rams from 2016 through 2018, and spoke with pride about the 2017 season that nearly saw the program become the first HBCU to make the D2 World Series.

“We were completely shocked. We did not see this happening. This has been one of the most successful programs at Winston-Salem State University. We brought a lot of titles here. A lot of hard work. “

“At the end of the day, you know it is a business,” Abru said. “But at the same time, it’s really not fair. Going forward, hopefully the alumni and former players and coaches can probably re-open the program and let this be reborn one day. But, it’s not fair at all.”

Abru’s opinion is shared by many in Winston-Salem and across the country.

Who is to blame for WSSU baseball’s demise? There’s plenty of blame to go around. You could blame the CIAA for being too slow to react to programs like Elizabeth City State and others dropping baseball. You could blame WSSU for not trying to find another conference to join where it could compete for a title and an easier path to the playoffs.

Or maybe no one is to blame. Maybe it’s the natural order of things. Baseball no longer holds the same weight it once did in the African-American community and with HBCUs struggling to fund their athletic programs, it can be a strain on the bottom line.

WSSU does not own its own baseball field, or softball field for that matter, so it must rent out the home of the Winston-Salem Dash, the city’s Single-A Chicago White Sox affiliate. Add in the cost of coaching salaries, equipment, travel and scholarships, and the bill starts getting pretty high for a sport that doesn’t charge admittance and sometimes has less than triple-digit attendance.

To be sure, though, the death of Winston-Salem State’s baseball program leaves yet another hole in the thinning fabric of HBCU baseball and African-American involvement in The National Pastime as well. WSSU is a racially mixed program, as it should be, but it is also an HBCU program that competed with the best of Division II baseball.

That’s something that Ritsche, who is white, referenced as his team soaked in its final moments on the diamond in its home city.

“Guys here always think their kind of the underdogs. Just from being a small HBCU in North Carolina, being a team that puts a good product on the field every year and competes for championships with everybody else, I think that these guys just kinda gelled that way.”

Remember, WSSU was just a few runs away from making history in 2017. It may well have broken through the glass ceiling and become the first HBCU to win an NCAA national title in the sport.

The trouble is, now we’ll never know. And nothing is worse than going to the funeral of someone who died too young, with too much potential.