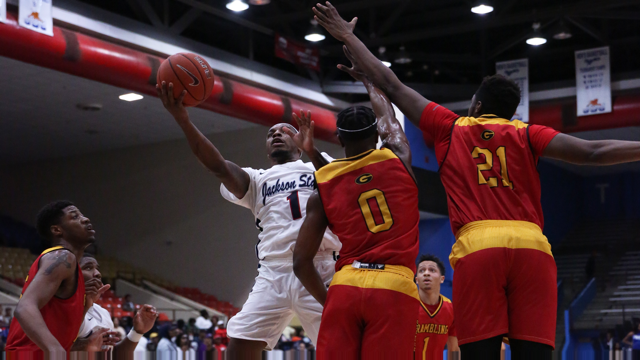 Jackson State players bought into the “just win a game” concept and knocked down GSU.

Jackson, Miss. – After leading by 14 starting the second half, the Jackson State men’s basketball team fought off a second half comeback to pick up a much-needed victory as the Tigers defeated Grambling State 71-60 Saturday night at the Lee. E. Williams Athletic and Assembly Center.

Needing a win to stay in the mix of the SWAC race ahead of the conference tournament in a couple of weeks, Jackson State players bought into the “just win a game” concept and knocked down the walls of adversity in front of them.

Wayne Brent, head coach for the JSU men’s basketball team, said he was happy about the win but his mindset of picking up the the victory is no different from when the team was 6-3 before going into its four-game slump.

“We were playing really well and we felt like we could compete in this league,” Brent said.

“Then all of a sudden, we lose four and you lose confidence. For guys to come out and beat a team like Grambling, a team that won the league last year, a team that has a chance get hot and win some games, it was a meaningful game,” Brent said.

Chris Howell, who led JSU in scoring in the first matchup
between the two teams, led all JSU scorers again Saturday night as he finished with 17 points and seven rebounds.

Howell, a senior guard for JSU, said winning this game was
huge for him and his teammates.

“It meant everything,” Howell said.

“We had a tough stretch but like the brotherhood that we
have and the good coaching staff we have, we stuck together.”

Ivy Smith, who only had eight points and two steals in the first half, scored 11 of his 19 points in the second half as the leading scorer for Grambling and the main point of concern for Jackson State going down the stretch of the second half.

“He is one of the best in the conference in knowing how to
get fouled. I didn’t think we did a good enough job on him at the end but we
had enough cushion.”

That cushion could have been more if JSU would have hit more
of its free throws, something that has been an on-going concern for Brent and his players when comes to closing games.

“It’s not like we’re not shooting them or the guys don’t
want to make them,” Brent said.

“It’s just something that we have to continue to be positive
about and continue to do the work. If we want to make a free throw, we got to
continue to get in the gym and work. The free throw is not going to make itself.”

Leading 38-24 starting the second half, both teams exchanged
baskets within the first four minutes of the half as Jackson State’s lead fluctuated from 12, 13 to 10 points. With 10:48 to play, Brown knocked down a three-pointer that led to a 7-0 run, giving JSU a 53-36 lead, its largest of the game.

Grambling, however, would not go away. GSU chipped away at Jackson
State’s lead and cut the deficit to as low as five points as the team nailed a
plethora of free throws and used a few buckets from DeVante Jackson, Nigel
Ribeiro and Smith.

However, Wallis and Jontrell Walker both knocked down a pair
of free throws to secure the victory for Jackson State.

In the first half, Jackson State maintained a five to seven-point
lead all up near the 12-minute mark of the half. The two teams then exchanged
baskets over the next several possessions. With 4:29 to play, Howell finished
on a layup in the paint that sparked a 10-2 run and giving Jackson State a
38-24 lead at halftime.