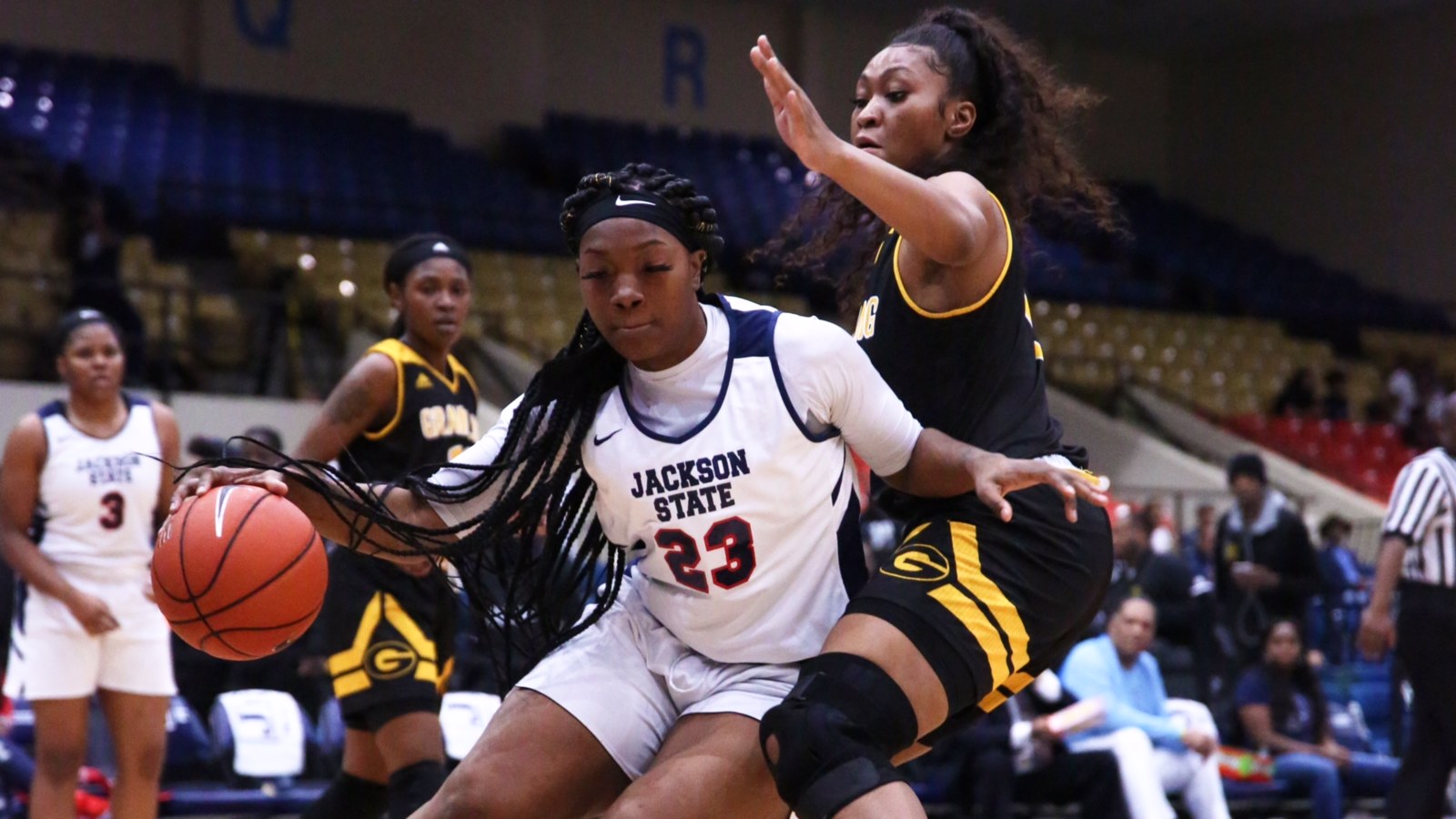 With the win, Jackson State completed the season sweep versus Grambling.

Jackson, Miss. – When the Jackson State women’s basketball team stepped on the court to play Grambling, the players figured that GSU would come out with lots of intensity, hoping to earn redemption after losing to JSU in the first matchup in January.

However, it was JSU that brought out the most intensity and effort in all aspects of the game as Jackson State defeated Grambling 89-60 Saturday evening in the Lee. E. Williams Athletic and Assembly Center.

With the win, Jackson State (12-13, 8-6) completed the season sweep versus Grambling and moved into fifth place in the Southwestern Athletic Conference (SWAC) standings, sitting one game behind GSU (12-14, 9-5) for fourth place. JSU has now picked up two straight wins following its loss to Prairie View, the team that snapped the Lady Tigers five-game winning streak.

Jackson State finished with five players in double figures and shot the ball 56.5 percent (35-of-62 shooting) from the floor and 58.3 percent (14-of-24) from the free throw line. Marneisha Hamer finished with 24 points and 14 rebounds and the double-double performance.

Behind Hamer, Kaisah Lucky finished with 15 points and eight assists, followed by Christina Ellis with 13 points and Antionette Womack and Taylor Lattimore finishing with 10 points respectively.

“That first game started our turning point of the season,” Reed said.

“But this game right here, I was a little nervous. I did not know what to expect but our girls had so much energy. To be the best team on the floor every quarter versus this team tells me we can make a run for it.”

Shakyla Hill – the league’s leading scorer who continues to make national headlines for her two quadruple double performances – could not find her rhythm in the game as she finished with 10 turnovers, 13 points off 3-of-14 shooting, seven assists, one block, and four steals. Jazmin Boyd led GSU in scoring with 15 points, three rebounds and two assists.

Even more, as if setting new records and standards have not been a trend for Hill, the 5-foot-7 point guard was on pace to pass GSU’s Shiakiea Carter for the most steals in SWAC history (469) had she earned five in the game.

However, for players like JSU forward Chelsea Causey, she and her teammates were determined to not let that happen on their home court.

“She thought she was going to come in here and get that,” Causey said.

“But nah, it says Jackson State swept Grambling not that she had five steals. So, we did what we did to hold her there. So, she got get that record on somebody else.”

The two teams exchanged baskets throughout up until the final minute of the first quarter before Lucky hit a jumper and the free throw after she was fouled, giving JSU a 23-19 lead.

In the second, after GSU managed to only let JSU maintain a five-point lead for nearly the first six minutes of the quarter, Jackson State used a 19-5 run and led Grambling 49-32 at halftime.

Reed credited the switch to a zone defense in the second as the focal point in setting the tone for the duration of the game.

“We wanted to protect the gaps to keep Hill from going down Hill,” Reed said.

“When we got into the zone, they kind of slacked offensively and we had them right where we wanted them in terms of confused as to what to run against the zone defense.”

JSU led by as many as 29 in the third quarter before GSU managed to string together several free throws from Hill and a couple of buckets from Boyd and Camryn London to cut the deficit to 19 at the start of the final period.

Grambling trailed by as few as 14 before Hamer and Lattimore put on an offensive explosion in the latter part of the final quarter to secure the victory for Jackson State.

JSU returns to action on Saturday as the Lady Tigers go on the road to face in-state rival Mississippi Valley in Itta Bena, Mississippi.