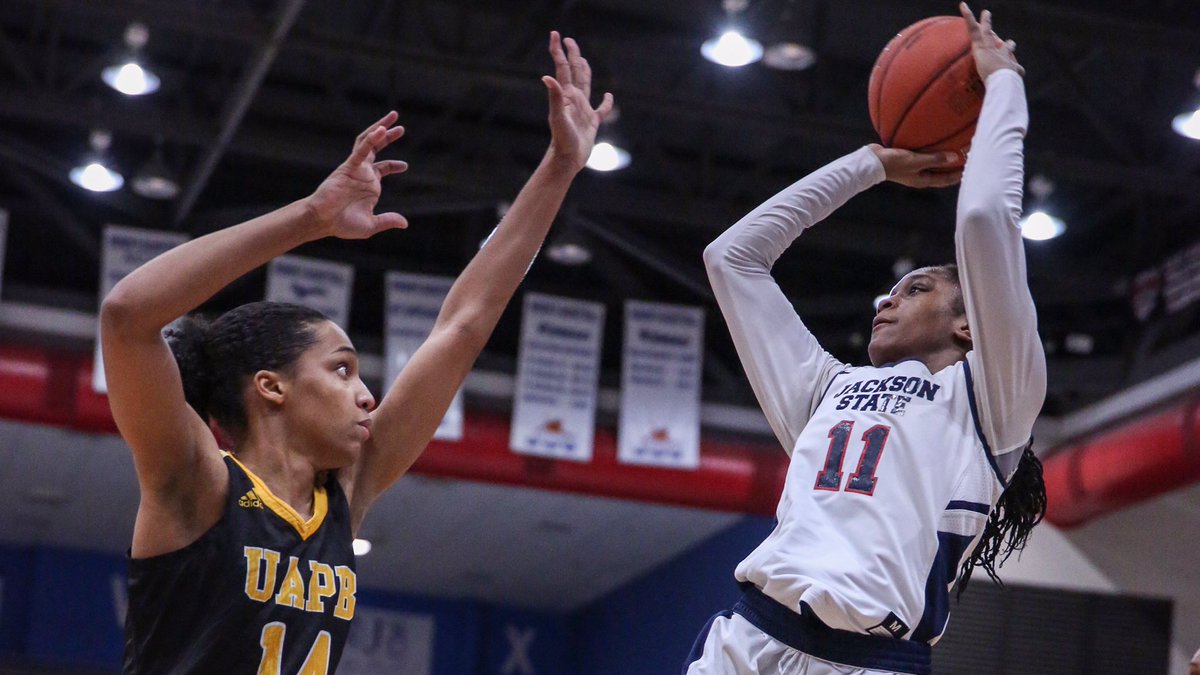 Since its loss to Texas Southern, things have changed drastically for Jackson State. For the Lady Tigers, they could not have picked a better time to begin to play as a team and close out games.

Jackson, Miss. — Nearly a month ago, the Jackson State women’s basketball team was coming off a 76-67 loss on the road to Texas Southern, putting the then Lady Tigers at 5-12 and 1-5 in Southwestern Athletic Conference (SWAC) play.

Just over the halfway mark in January, the Lady Tigers only conference victory came at home in an 88-66 victory against Alcorn State on Jan. 12.

Since its loss to Texas Southern, things have changed drastically for Jackson State. For the Lady Tigers, they could not have picked a better time to begin to play as a team and close out games, things that head coach Tomekia Reed has stressed to her players all season.

“I’ve always felt the team was one of the top teams in the conference,” Reed said.

“I was just waiting for us to really click.”

Jackson State (10-12, 6-5) has won its last five games that include victories over Mississippi Valley, University of Arkansas-Pine Bluff, Grambling State, Alcorn State, and Southern. When taking a closer look at the Lady Tigers victories, both Grambling and Southern have sat atop the conference standings before or during their five-game winning streak.

In their most recent wins against Alcorn and Southern, JSU shot a combined 48.5 percent from the floor. Chelsea Causey, the SWAC Player of the Week for the Lady Tigers, averaged a double-double with 13.5 points and 12 rebounds in the two wins. Combine that with the efforts from their other players on the floor, players coming off the bench and the defensive intensity, the Lady Tigers have begun to “click” in a critical, late stretch of the season.

“Being able to see our girls grow tremendously in the Alcorn and Southern games and in the last five games has been awesome,” Reed said.

“Our players have really bought into playing defense and being defensive beasts on the floor.”

While winning the last five has been exciting, Reed and her team know that the work to reach their ultimate goal is far from over.

“When we pass one game, we don’t necessarily look backward,” Reed said.

“We continue to look forward. We celebrate our victories but we quickly move on to the next game.”

The remainder of the season only gets more challenging as the Jackson State hosts Prairie View Saturday afternoon in the Lee E. Williams Athletic and Assembly Center.

Prairie View (10-10, 7-3) enters the game in a three-way tie for first place in the SWAC with Southern and Alabama State. In a previous matchup between the two teams, the Lady Panthers defeated the Lady Tigers 76-57 at home.

However, riding high with confidence after five straight wins, the Lady Tigers will look to split the season series and secure their sixth consecutive victory following the same concept that has helped them along their journey: taking each game one at a time.

“The players are extremely hungry for this victory,” Reed said.

“Prairie View being tied for No.1, that’s their ammunition. They’re like, we’re going for the No. 1 team. They are ready and excited.”

Prairie View will look to rebound from its 73-67 loss to Texas Southern. Under head coach Sandy Pugh – the longtime head coach who spent 18 seasons (2000-2018) at Southern University – the Lady Tigers will again face a Lady Panthers team that will resemble a similar style and matchup to the Southern game.

The Lady Panthers feature some talented players in guard Shala Dobbins, guard Dominique Newman and forward Artavia Ford. Dobbins leads the team in scoring, averaging 15.2 points per game and ranks second in the SWAC in scoring. She also leads the team and the conference in free throw percentage (.853) as she finds ways to get to the foul line.

Ford averages 11.5 points per game, followed by Newman with 8.4.

Forwards Ke’Asia Williams and Le’Neique Nealy dominate the rebound category as the two average 6.7 (sixth in the SWAC) and 4.5 rebounds per game respectively. The two of them anchor a Lady Panthers team that sits fifth in rebounding offense (37.8 rpg) and sixth in rebounding defense (40.7 rpg).

Marneisha Hamer, who has been coming off the bench for the Tigers, leads the team in scoring with 15.2 points per game (third best in the SWAC), followed by Christina Ellis with 12.1 ppg. In the last two games, Hamer averaged 10.5 points per game while Ellis averaged 14.

Free throws have been a big deal for the Lady Tigers as they have struggled to hit from the charity stripe late in games. JSU ranks sixth in free throw percentage (.575) in the conference coming into the game.

When it comes to rebounding, the Lady Tigers have been successful, sitting at fourth in rebounding offense (39.3 rpg) and first in rebounding defense (36.1 rpg). Hamer leads the team in rebounding, averaging 6.1 per game (seventh best in the SWAC).

Late February into early March is a period in college basketball where champions are created in overcoming adversity and withstanding the obstacles in front of them.

And for the Lady Tigers, being confident but continuing to grow each game is the plan of action they plan to implement against the Lady Panthers and for the remainder of the season.

“We’re not playing for attention; we’re playing one game at a time to get that victory.”

666
The Latest in HBCU Sports and Culture