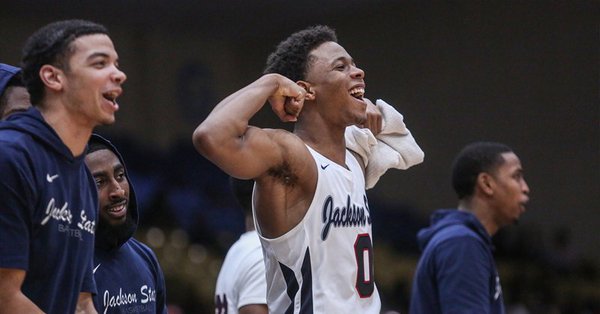 Jackson State finds itself tied for fourth with Arkansas Pine Bluff (9-15, 6-5) and in a ‘must-win’ situation to stay in the mix of the SWAC race

A week ago, the Jackson State men’s basketball team sat in a three-way tie for second place with Texas Southern (12-11, 7-3) and Alabama State (9-13, 7-4) in the Southwestern Athletic Conference (SWAC) standings.

Jackson State (9-15, 6-5) had won three consecutive games as they prepared for a two-game road trip to face Alcorn State and Southern. Hoping to add two more wins to their standing by playing good defense and taking advantage of scoring opportunities, the Tigers dropped both games.

Defense – what has been the Tigers strongest asset in any game – was not at the level where it needed to be in their back-to-back losses, something head coach Wayne Brent stated in the weekly press conference Thursday afternoon.

“We did not defend,” Brent said.

With the losses, Jackson State finds itself tied for fourth with Arkansas Pine Bluff (9-15, 6-5) and in a ‘must-win’ situation to stay in the mix of the SWAC race as the Tigers host conference leader Prairie View (11-12, 9-1) Saturday evening in the Lee. E. Williams Athletic and Assembly Center.

“If we could have split with Alcorn and Southern, we would be sitting in a whole different position with seven wins with five our next seven at home,” Brent said.

“You’re looking at it a little different now. We don’t have room for error. It’s a must-win for us on Saturday and our guys know it.”

In the first meeting between the two teams in conference play, Prairie View rallied to defeat Jackson State 55-51 at home after trailing the Tigers 31-23 at halftime. The Panthers trailed by as many as 12 points but the guard and forwards stepped up big for them, something Brent will have his eye on going into the game Saturday evening.

After PVAMU took only its second lead of the game at 50-49, Dennis Jones – one of the Panthers dynamic guards – nailed a three-pointer with :15 seconds left to secure the victory.

“They have very good guard play throughout their lineup,” Brent said.

“They got two or three guys that come off the bench that play really well. Even their fours and fives are not traditional fours and fives. They’re tough kids.”

The Panthers prefer an up-tempo style of play and will look to do that against the Tigers. However, for the Tigers, Brent said they must be ready to implement their game plan and get back to the basics of playing good defense.

“The thing with them is they try to speed you up and push the ball up and down the floor,” Brent said.

“They get in the passing lane and try to take what you do away. We have to play them how we played them over at their place. We defended really well and shot the ball well.”

Jackson State shot 35 percent off 19-of-54 shooting from the floor and 75 percent from the free throw line. Tigers’ Venjie Wallis – who averaged 18 points over the last two games for the Tigers as the leading scorer – led the team in scoring with 14 points.

PVAMU shot 36.5 percent off 19-of-52 shooting from the floor. Gerard Andrus led the Panthers in scoring with 12 points, followed by 10 from Gary Blackston – the second leading scorer in the SWAC – and Antione Lister with 11 points off the bench.

For JSU, despite giving up more points in their last two games, the Tigers sit atop the conference in scoring defense (allowing 66 ppg) but last in scoring offense, averaging 60.5 ppg.

When it comes rebounding, the Tigers rank fourth in rebounding offense (36.5) and second in rebounding defense (34.7), something that continues to help JSU throughout the season.

Chris Howell and Wallis lead the Tigers in scoring, averaging 11.6 points respectively. Wallis comes into Saturday after having a 13-point and 23-point performances in his last two games.

Against the Panthers on Saturday, Jackson State will need high production from these two plus their other offensive weapons like Jontrell Walker to step up and be consistent throughout the game.