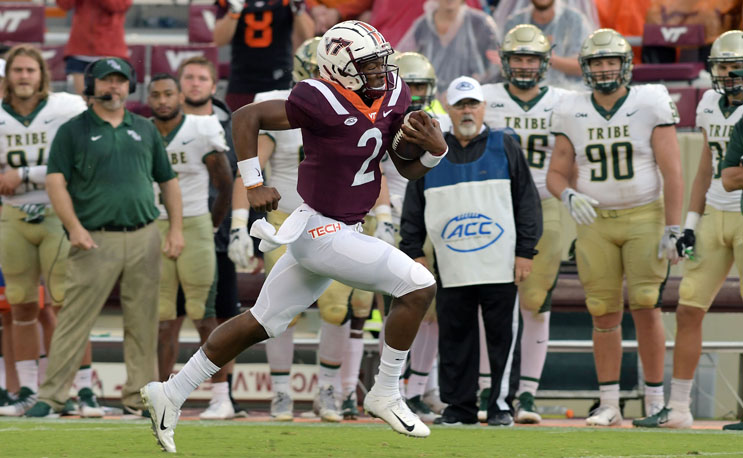 Former Greensboro Dudley Star and son of A&T legend Hendon Hooker is transferring from Virginia Tech. Could he join the Aggies?

The words “transfer portal” are two of the trendiest words in the ever-changing lingo of college football. Simply put, it’s a declaration of a student-athlete’s intent to transfer to another school.

The son of an HBCU legend is now officially in the transfer portal and its not out of the realm of possiblity that he could end up following in his father’s footsteps.

Virginia Tech redshirt sophomore Hendon Hooker announced on Wednesday that he’s now officially in the transfer portal. He is the son of Alan Hooker, who led A&T to the 1986 MEAC title and is enshrined in the school’s hall of fame.

Moments after he announced his intention, A&T legend and Chicago Bears running back Tarik Cohen quoted his tweet with the word “A&T” and an eyes emoji.

A&T, of course, is looking for a replacement for Lamar Raynard, who went 35-2 as a starter during his career in Greensboro. Former ECU quarterback
Kinglsey Ifedi announced he was going from Greenville to Greensboro on the heels of A&T’s Celebration Bowl win, but obviously, Hooker would be nearly impossible to pass up if he wanted to come home.

Hooker emerged from his father’s shadow as a star at Dudley High School, where he passed for 6,027 yards and 55 touchdowns and rushed for 2,975 yards with 48 touchdowns. The 6’4, 225 pound quarterback also led Dudley to two state titles right in A&T’s back yard.

He saw duty in six games in 2018 after redshirting in 2017, but attempted just four passes. The highlight of his career so far has been a 69 yard touchdown run against William and Mary.

A&T had little chance of landing Hooker coming out of high school, as Power Five teams were all over him. And there will likely be several FBS schools interested in a big, athletic quarterback with low college mileage. However, if he transfers to an FBS , he’ll have to sit out a season and will have just two years of eligibility left. If he goes to a non-FBS school, such as A&T, he could play immediately and would still have three years of remaining.

Add that in with A&T’s recent success and his family lineage, don’t count it out for landing the hometown kid. After all, he did pretty well in blue and gold the first go-round in Greensboro.