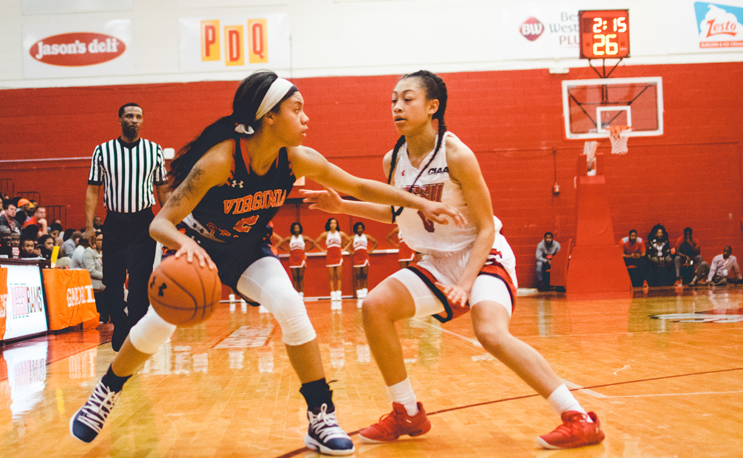 For once, the Virginia Union women are not in the top spot in the CIAA. Can Bowie State stay on top?

A little over a month remains in the regular season before everyone packs up for Charlotte, and game results have been shaping out interestingly in CIAA women’s basketball.

Recent games have primarily been in conference play, meaning the results impact the division standings and future game implications. Six women’s basketball games are slated for Saturday, January 12 and each one is conference play with its own unique reason that it is must see T.V (or in this case, live stream.)

Virginia Union is on a three-game win streak after its most recent win over Shaw, while Fayetteville bested Lincoln and has now won five in a row. Both teams are coming off a game with a high-scorer; Shareka McNeill of VUU finished with 34 points and Hyman of FSU finished with 23 points in their respective Thursday evening victories. McNeill has been a force to reckon with for the conference for Virginia Union, now averaging 23.8 points per game and showing she’s just as dangerous on defense with 30 steals. Don’t look for her to slow down anytime soon. And she’s only a sophomore.

Union, the defending champs, has the second best northern division record but holds third place due to conference play. Similarly, Fayetteville has the second-best record in the southern division but is ranked fourth due to division play. One of these teams’ win streaks will have to come to an end and someone will leave with a second conference loss. Tip-off is at 2 PM at Capel Arena.

Chowan’s loss to Johnson C. Smith ushered in its first conference loss and a two-game skid. Winston-Salem State has now won three straight after defeating Virginia State. Danielle Weldon lead in scoring for CU with 11 points. Amaya Tucker of WSSU tallied up 20 points in their Thursday games, but Brionna Pate comes into this game averaging 14.9 points and 10.25 rebounds.

Chowan holds second place in the northern division while WSSU is third in the southern division. Both Chowan and WSSU only have one conference loss and can not afford to drop a conference game with its respective good, but not great records. Tip-off is at 2 PM at C.E Gaines Center.

Virginia State got knocked down by WSSU on the road and has lost three straight. Livingstone’s woes have been continuous losing eight in a row after its blowout road loss to Elizabeth City State. On Thursday evening, VSU’s Chrisanna Green recorded a with 15 points and 16 rebounds and LC’s Daisa Harris put up over a quarter of her team’s final score with 23 points in their respective defeats.

Virginia State is fourth in northern division standings and Livingstone is fifth in the southern division. Livingstone is a solid team and can run up the score, but falls apart in the second half and its record is suffering because of it. Fortunately, the losing streak for one of these teams comes to an end on Saturday. Tip-off is at 2 PM at New Trent Gym.

Lincoln snapped a two-game win streak in its loss to FSU, while Saint Augustine’s fell to Bowie and has now lost seven in a row. Kwanza Murray put up 17 points in LUPA’s defeat. Murray has been dangerous from beyond the arc as well, cashing 20 of her 33 three-point attempts. Shankia Clark recorded a 13 point, 11 rebound double-double in SAU’s loss on Thursday evening.

Lincoln, while not far from .500, is in place in the northern division due to its blemished conference record and will have a lot of work to do in the next few weeks to gain favorable conference placement. Alternatively, Saint Augustine’s is in second place in the southern division due to division play despite their unfavorable overall record. Both teams will be fighting for a much-needed second conference win. Tip-off is at 2 PM at Emery Gymnasium.

Elizabeth City State defeated Livingstone and has won four in a row, while Johnson C. Smith broke a two-game skid in its defeat over Chowan. ECSU’s Naterria Luster recorded a double-double with 21 points and 13 rebounds, and Imari Montalvo of JCSU put up one of her own with 17 points and 11 rebounds.

Elizabeth City State is in fifth place in the North while Johnson C. Smith sits at fourth place in the South. One of these teams will be collecting a third conference loss, which will make division placement less than ideal. Tip-off is at 2 PM at Brayboy Gymnasium.

Bowie State defeated Saint Augustine’s and has won 12 straight, while Shaw fell to Virginia Union and is on a two-game skid. Macy Keen of SU put up 28 points, over half of the team’s final total. BSU’s Kyaja Williams lead in scoring with 16 points.

Bowie State has been impressive thus far this season and is shaking the table of the conference, seemingly taking complete control of the away from Virginia Union’s reign.

BSU sits in first place in the northern division and is unbeaten in conference play. SU, on the other hand, is at the bottom of the southern division and has not won a conference game yet. This is no throwaway game, though; Shaw has a lot to fight for and two of Bowie’s last three games have been decided by less than ten points. Tip-off is at 2 PM at C.C. Spaulding Gymnasium.

All six games will be available to stream through the CIAA Sports Network, or you can see live updates by following HBCU Gameday on Twitter.