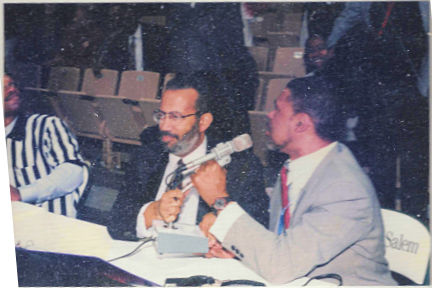 Eric Moore, educated at NC State in the late 1960s, saw a need for access to HBCU sports information, filled a void and created a legacy.

This is the second part of a series on Eric N. Moore, the man who brought HBCU sports to the internet. Read Part I here.

Bringing Information To The Masses

At a CIAA tournament in the early , a former college classmate of Moore’s who worked for invited him to Jackson, Mississippi to assist with the production of a football clash between rivals Southern University and Jackson State. At the time, Moore served as the Director of Communications at Fayetteville State University, where he oversaw the News Bureau, Public Relations, the Telecommunications Center and the Sports Information Department.

Moore looked over the crowd of 60,000 people packed in Mississippi Veterans Memorial Stadium to watch the Tigers and Jaguars do battle in a regular season game.

“Then it just came over me. While I was amazed at the size of the crowd, my mind immediately thought, what about the people who aren’t here,” Moore said.  “They deserve to have access to the information if they weren’t able to make it to the game.”

Remember this was before the days of social media and getting regional much less national coverage was uncommon for the HBCU landscape. There was a market and Moore was ready to tap into it.

Welcome To The Wolfpack

While it is easy to associate Moore with HBCUs and assume that he is a graduate of one of the many storied institutions, just the opposite is the case. He completed his undergraduate matriculation at North Carolina State and earned a Master’s at Ohio University in Athens, Ohio.

“I had the foundation that basically gave me the confidence to succeed, yet not be swayed or led to believe that HBCUs weren’t good enough or didn’t have a purpose and place in society.”

As for how he found his way to NC State, well, his guidance counselor basically told him: “that’s where you are going.”

Moore laughs at the memory.

“What you have to realize is integration was on the horizon and with that, opportunities were becoming available. I enjoyed math and loved building things so engineering was a strong interest for me, said.

NC State would be an ideal fit for several reasons, most importantly to remain close to home and his mother after his father passed during his sophomore year in high school.

“I represented one of the early non-white entrants into NC State and I would be able to venture out, pursue my education and still be close to my mother.”

He entered his freshman year as an Electrical Engineering major and spent time working in the campus radio station. He also drew the admiration of his peers, moving up the ranks as a member of the Student Government as one of the Engineering Senators and later, using some clever PR tactics, became the first black person elected as President of the Student Senate.

“My name was an ethnically neutral, so with the support and endorsement of some of my white classmates, we put up a bunch of “Vote for Eric Moore” signs and worked a deal with the editor of the campus newspaper (located next door to the radio station) that they would only run my photo if I won the election. Which I did.”

It all worked out and with his Bull City background he was a very active member of the campus community, even securing a visit from activist Dick Gregory during his tenure.

Moore was also instrumental in helping bring Black Greek Life to the NC State campus. He and other NC State men pledged Alpha Phi Alpha Fraternity, Inc. (his father was an Alpha) at Shaw University (Beta Rho chapter) and under the guidance of Dr. Augustus Witherspoon of the Phi Lambda (Graduate) chapter, would later help charter the Eta Omicron chapter in April of 1971. Eta Omicron would be the first Black Greek Organization on NC State’s Campus.

While at Shaw he met Betty Jones, an AKA and big sister during his pledging days. She was majoring in Political Science at Shaw and they struck up a friendship.

Their first date later took place in the Student Center on the Shaw University campus. They married his junior year at NC State and will celebrate their 50th Wedding Anniversary in 2019.

While it was a time of progression and firsts, there were also some dark days during his time at NCSU. Once during his freshman year, Moore and his suitemate returned to their room to find a sign posted that read “SPONGE is out to get you”.

After conferring with some upperclassmen, it was explained that the word stood for Society for the Prevention of (N-word) Getting Everything.

“Not that I didn’t know before but it was a reminder of where I was,” Moore said. also had to get used to looking up after getting off elevators headed to class because they would drop water balloons on you. And as you were walking across the quad, epithets would be yelled from various buildings, but we never saw their faces. But we stuck together and we made it through.”

It was during his time at the campus radio station at NCSU that Moore was thrown an unforeseen curve ball. Working at the campus station meant having access to the AP Wire during the time of the two Selective Service System lotteries. And sure enough, one day he recognized the likelihood that his number (according to date of birth) would be called.

“Once it became a reality, I joined the ROTC at NC State. I figured if I was going to enter the military, I would prefer to go in as an officer.”

So, when he graduated from NCSU in 1970 with a degree in Speech Communications (he changed his major from Engineering on the advice of the ROTC instructor), Moore was commissioned as a Second Lieutenant in the United State Air Force. After a total of four years of duty, Moore rose to the rank of Captain with stints at Scott Air Force Base in Illinois and Anderson Air Force Base in Guam.

Eric Moore is undoubtedly a trailblazer who paved the way for the coverage of Black College Sports. ONNIDAN has maintained a strong following and has had steady growth over the years for which he is thankful. His vision and groundwork laid the foundation for the likes of HBCU Gameday and other mediums and helped shape perceptions for media and fans alike.

“Like with any venture, it hasn’t been easy,” says Moore. “Being a small shop operation, I can relate to what Steven (Gaither) and Tolly (Carr), Kenn Rashad (formerly TSPNSports, now  HBCUSports.com) and others do because you are always looking for good content and want to tell stories that people deserve access to. It can be challenging but very rewarding and when you see the response from the fans, it’s all worth it.”

The market for HBCU sports coverage has come a long way from an idea and a Commodore 64 with two touch pads. He is 34 years (and counting) in the business of Sports Communications and when asked about his legacy, Moore was very candid in his response with the recognition that at any time ONNIDAN can cease to exist and eventually fade from memory.

“There once was a time that HBCU sports got NO coverage.  Now with the multiple outlets and a recognition by the general market that our money is just as green as other audiences they serve, the times have begun to change.”


“The biggest frustration that we all face is advertising support.  It goes back to the early Black newspapers and continues today….advertisers won’t spend equitable amounts of money on Black media.  We need to be more proactive in supporting Black media and supporting advertisers who support Black media.”

As revolutionary as Moore has been, he isn’t one to toot his own horn.

“Whatever comes my way is going to come. I’m not necessarily trying to shape what it is or when it comes. I’m not interested in what my legacy will be.”

Because, for Moore, about the work above all else.

“I’m more pleased that others see an opportunity to do stuff. As long as the story of HBCUs continues to be told and our schools are highlighted, that’s what is important to me.”