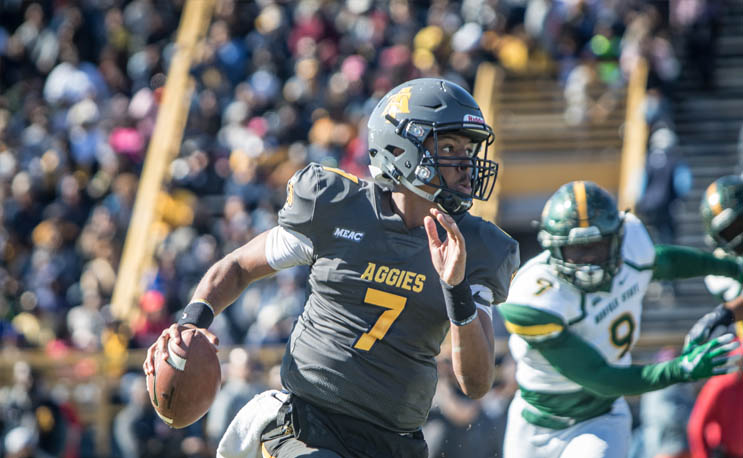 The senior QB hit his head on a sack in last week’s win over Norfolk State.

Greensboro, NC-North Carolina A&T won its eighth homecoming in a row this past Saturday but in the end, it was bittersweet. Quarterback Lamar Raynard exited the game with 9 minutes left in the fourth quarter after suffering a hard hit from Norfolk State linebacker, Nigel Chavis.

“Lamar did suffer a concussion,” A&T head coach Sam Washington said via Greensboro News and Record. “Now, just how severe it is, that’s still in question. He’ll be tested on a daily basis to see where he stands and what his progress is. That’s one that’s tough for us. You never want to see any kid go down, especially with a head injury.”

Raynard was slow to get up but eventually walked off the field on his own. He would not return for the rest of the game. Before leaving, Raynard completed 16 of his 28 passes for 126 yards and a touchdown.

His replacement, Kylil Carter, finished out the rest of the game. Carter has had at least one snap in every game this season. His most memorable performance coming from the upset win over East Carolina where he threw for 93 yards and two touchdowns late in the third quarter.

Raynard was the first of three players injured that day. Freshman cornerback Amir McNeil and senior defensive lineman Justin Cates would also exit the game with injuries. McNeil has been starting in place of All-American cornerback Franklin “Mac” McCain after he tore his ACL in the A&T’s win over Bethune Cookman. He left the game favoring his right leg but it is not believed to be a season-ending injury. Cates’ injury, however, has Coach Washington a little worried.

“Justin Cates is in question,” Washington said to the Greensboro News and Record. “He twisted his ankle out there, and he’s being looked at by the doctor as we speak to see just how much damage was done.”

A&T is still in the running for the MEAC title following Florida A&M’s loss to Howard. It will face the Savannah State on Saturday, November 10th.