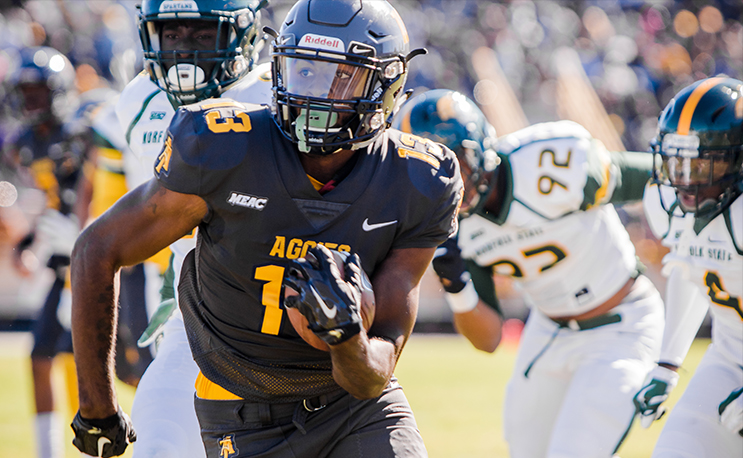 NC A&T not only put together a great second half for a GHOE win, it also stayed alive in the MEAC and Celebration Bowl races.

A&T put separation between itself and Norfolk State in a 37-20 win at homecoming in front of 21,500 fans at BB&T Stadium.

The win keeps A&T alive in the MEAC title race, putting it in a tie with Florida A&M. FAMU lost 31-27 to Howard on Saturday, but holds a tiebreaker over A&T thanks to its 23-21 win in Greensboro last month.

Redshirt senior Marquell Cartwright saved his best performance of the season for his last home game, rushing for 183 yards and two touchdowns. He led an Aggie running game that had its way with the Spartans, rushing for 310 yards and three scores on the day.

NSU gave A&T all it could handle in the first half, striking first with a 69 yard punt return by Marcus Taylor. NSU would lead 10-7 after a Josh Nardone field goal and again after a 20 yard touchdown pass gave it a 17-14 lead with 11:51 remaining.

Cartwright’s five yard run with 4:07 in the second quarter gave A&T a 21-17 lead, one it would never relinquish. Malik Wilson added a 99 yard kickoff return late in the third quarter to put distance between the two squads.

A&T improves to 7-2 overall as it heads to Savannah State next weekend before meeting archrival North Carolina Central in Durham. If A&T wins out and FAMU loses to Bethune-Cookman, A&T would win the MEAC title and return to the Celebration Bowl for the third time in four years of the game.

733
The Latest in HBCU Sports and Culture