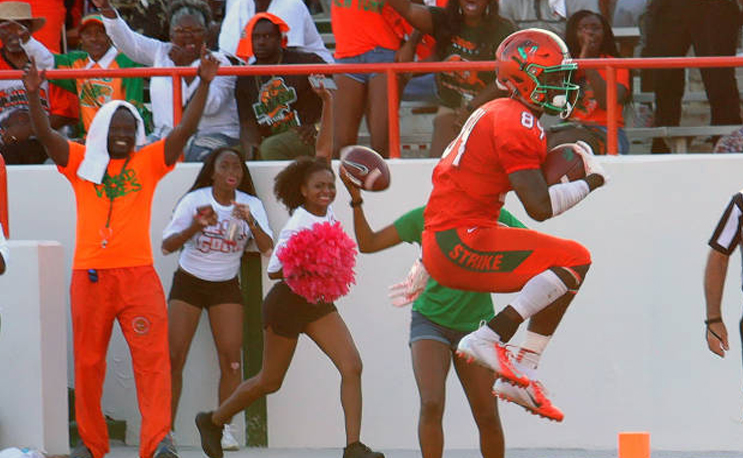 Family and financial concerns will keep FAMU football in Tallahassee during Hurricane Michael.

Florida A&M, like most of Tallahassee, is closed in preparation for the arrival of Hurricane Michael.

The FAMU football squad, however, is staying in Tallahassee even as the city prepares for what could be a Category Four Hurricane by the time it hits Florida’s capital. The team is set to take on defending MEAC champion North Carolina A&T in Greensboro on Saturday in a battle for first place in the conference.

The decision was made to stay in town after several meetings on Monday, according to FAMU coach Willie Simmons.

“We made the decision to keep the team here, together, and ride the storm out together. As a team, as a coaching staff, as families. Because again, coaches were concerned about leaving our families behind,” Simmons said during the MEAC’s weekly conference call.

“We’re up somewhere safe, and all of our families are here going through a category three storm themselves, I probably wouldn’t have a coaching staff to come back to if that had been the case.”

Family ties aside there were several other factors that went into the decision, including the cost of housing the team on the road for four days to avoid the storm. Simmons candidly explained that it was just not a viable option for the Rattlers.

“The cost that would come along with making that type of travel, really, budgetary wise, we don’t have at this point. It’d deplete our budget to move this team for four days,” he said. “There’s just a lot of things that went into trying to move the team out of here before the storm.

Simmons says its a tough situation for the players, who of course, have families and parents too.

“Families are scrambling trying to figure out what to do with their kids, trying to figure out where to come and get them, let them drive home or leave them here. “It’s that delicate situation, we want to ensure their safety, and make sure that that’s first priority. But also, as of right now we have a football game to be played. For the families that’s not their concern. There concern is their children and their safety.

“We have to try to do what’s best in both scenarios,” he said. “It’s definitely a challenge.”

Thank you to everyone for your continued prayers for @FamuFootball! We are sheltered, fed, and safe as we prepare for this storm. I want to thank @LRobinsonFAMU and the administration for working diligently to make the most out of this terrible situation! #FAMU #HuricaneMichael

Of course, the Rattlers already face a tough enough challenge once they get to Greensboro. The Rattlers are on a three-game winning streak after their first shutout in 18 years. After the storm passes they will hit the road, whichever one is available, to face the Aggies who are 5-1 and ranked tenth in the nation.

“The challenge right now is the psyche of my football team,” Simmons said. “We’ve got the game on one hand, we’ve got this category three storm headed our way on the other hand and we just have to make sure that our guys can maintain their focus with what they need to do off the field and preserving their homes and their families and making sure that they’re all safe, but also focusing on what needs to be done to play the game on Saturday against the preseason team of the year.”