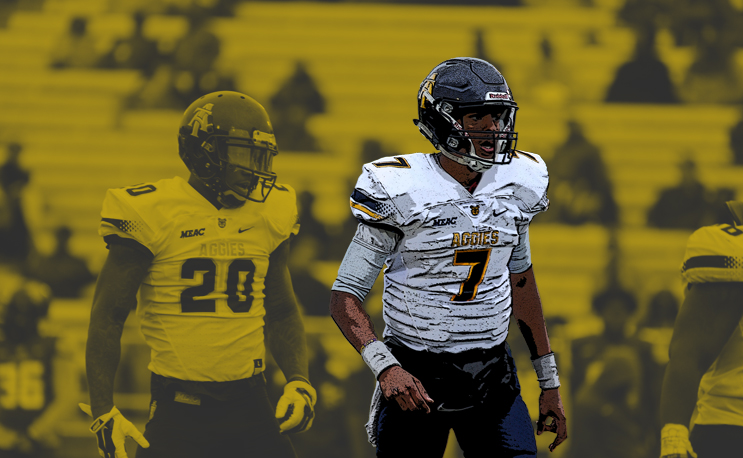 North Carolina A&T has shown it is the top HBCU program. How will that translate on the national stage?

This time last year the big talk around North Carolina A&T was whether or not it could compete at the same level with the loss of Tarik Cohen. It came back with a resounding “YES” as A&T had its best season ever, going 12-0 en route to the MEAC title and a win in the Celebration Bowl before being named HBCU champs as Rod Broadway rode off into the sunset. Long-time Broadway assistant Sam Washington was named his successor in January, giving a very good team continuity.

Leading the way again will be former High Point Andrews star Lamar Raynard. The rising senior started last season on fire with a four touchdown, 321-yard performance against Gardner-Webb and continued that way through the rest of the season. Raynard’s season was easily the best by any A&T quarterback (2,932 yards, 27 TDs, 7 INTs).

All signs point to Raynard and Co. him having another monster season as they are favored to repeat in the MEAC and return to the Celebration Bowl once again. After all, he’s still got junior receiver Elijah Bell. The junior from West Virginia caught 64 passes for 11 touchdowns and heads into the season as the best skill position pro prospect in the MEAC. And he’s got a few other receivers that go 6’2 or better in Quinzel Lockhart, Zachary Leslie and Ahmed Bah.

If that wasn’t enough he’s got preseason All-MEAC tight end LeRoy Hill and a backfield that includes Darius Graves and Marquell Cartwright. He will be missing two big components of A&T’s offensive success as offensive tackle Brandon Parker is now in the NFL and former OC Chip Hester has left the program as well. It will be interesting to see if the offense loses any explosiveness due to their departures.

Defensively, the Aggies remain stacked with a total of four players who made HBCU Gameday All-American status heading into the season. Defensive linemen Darryl Johnson and Sam Blue will put pressure on defensive lines from start to finish. Mac McCain was one of the best at taking away the ball as a freshman defensive back in 2017. He might not get challenged too much because of his ball-hawking skills, but Timadre Abram is a force to be reckoned with as well.

Which way is up

Can A&T go unbeaten again? It’s a long shot. If they were, it would be even more impressive given the more difficult schedule it faces. East Carolina will be tougher to beat than UNC-Charlotte was in 2017 and A&T will have to go on the road to face BCU and NCCU compared with home games last season.

Perhaps the most telling game will be the FCS Kickoff game against Jacksonville State. Despite its perfect record, A&T is not ranked in the top 10 of the FCS, likely due to the MEAC and SWAC’s lack of participation in the FCS playoffs. A win on national TV over a national power like JSU would go a long way towards showing the top HBCU is on the same level as an FCS contender.