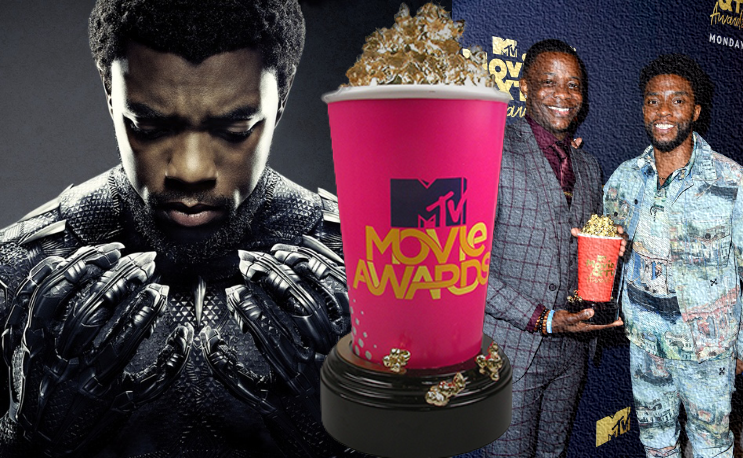 Chadwick Boseman took a moment to recognize a real-life superhero.

On Monday night Howard graduate Chadwick Boseman won the “Best Performance in a Movie” award at the MTV Movie Awards for his performance in Black Panther.  Hardly a surprise but what he did while on stage did catch some off guard.

During his acceptance speech, Boseman brought a real-life Superhero onto the stage. James Shaw Jr., a Tennessee State alum, surprisingly accepted the invitation onto the stage.

This was an uplifting moment right when America really needed it. Chadwick Boseman gave the Best Hero Award he won for Black Panther to James Shaw Jr., the Waffle House shooting hero, who was in attendance at the #MTVAwards. Gotta love both of those dudes! pic.twitter.com/eXUcETakxx

Boseman gave his “golden popcorn statue” to Shaw to keep while heaping praise on him. Back in April, the 29-year-old  wrestled an AR-15 assault rifle from a gunman who burst into an Antioch, Tenn. Waffle House and opened fire.

“You didn’t even know we were about to do this,” Chadwick laughed as the crowd erupted in applause. “If you don’t know James – he fought off a gunman in Antioch, Tennessee … a Waffle House. He saved lives.

“So this is gonna live at your house. God bless you man.”

🍿🍿🍿 and more 🍿… THANK YOU #MTVAwards! #BlackPanther fans, you’re incredible. During the show, I was honored to meet @JamesShawJr9. He saved countless lives by tackling a gunman who opened fire on people in Antioch, Tennessee in April. He’s a true hero that walks among us. pic.twitter.com/bIF8vOk3v3

Shaw set up a GoFundMe page in the aftermath of the shooting for the victims and their families.  In May, he presented a check of more than $241,000 to the families, and injured victims, at a private ceremony at Tennessee State University.