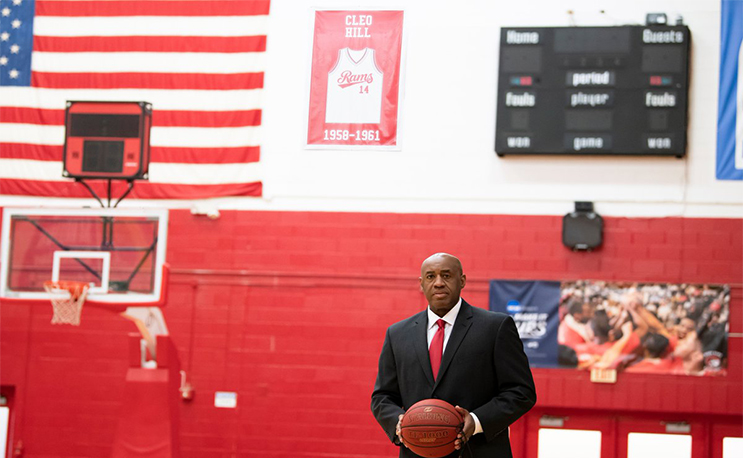 Cleo Hill Jr. could have followed in his father’s footsteps as a player, but decided against it. WSSU’s new coach is embracing it now.

Cleo Hill Jr. decided not to live in the shadow of his legendary father at Winston-Salem State when it was time for him to choose where he would play college basketball. On Monday he came full circle when he accepted the head coaching job at his parent’s alma mater.

Hill said his 1984 trip to WSSU showed him just how much of a legend his father was at the school.

“My father’s name was just so large,” Hill told HBCU Gameday. I thought it was large in New Jersey but when I finally got to campus…you know in the end I was like, you know, I don’t want any parts of the shadow right here.”

Instead, Hill’s mother placed a call to an uncle in Durham, and the son of the great Cleo Hill was headed to North Carolina Central, where he played from 1984-1988 under legendary coach Mike Bernard.

“I just fell in love with the campus, and it wasn’t as much pressure,” Hill said.

A challenge is exactly what awaits Hill at Martin Luther King Blvd.

Short term, he’s got to figure out how to turn a team that won five games last season into a winner. The cupboard isn’t empty as all-CIAA forward William Crandell will be back, as will Jamel McCallister, a talented frontcourt player in his own right. And technically 2017 CIAA Rookie of The Year Rob Colon is still on the roster, although he has expressed interest in transferring after an up-and-down season under James Wilhelmi last year.

Besides that immediate challenge, there is a larger one that looms as well. WSSU basketball has a storied history that includes the new coach’s namesake, Earl Monroe, and the legendary coach Clarence “Big House” Gaines. But since 1977, WSSU has just three CIAA basketball titles, two under Rick Duckett (who was also a finalist for the job) and one under Bobby Collins in 2012.

WSSU Chancellor Elwood Robinson praised Hill for his connection to the past as well as his vision for the future.

With his introduction falling on the 95th birthday of Gaines, whom he considers a mentor, Hill put it out there that the school has reached the pinnacle before and that it is still possible.

“I see no reason why the sky shouldn’t be the limit for the men’s basketball team,” Hill said at the podium. “It’s been done. Rams basketball has been at the pinnacle, whether it’s in the conference…nationally. A lot of universities cannot say it, that they’ve won a national championship. So it’s not impossible.”

The last three years have seen the Rams fail to win a game in the CIAA Tournament, much less an NCAA Tournament game.

But Hill’s press conference had more buzz than any surrounding WSSU basketball since I entered the school in 2004. Phillip Stitt was a great guy and a solid coach, but he never brought home the CIAA title. Bobby Collins’ did in 2012 after leading the team through the D1 attempt, but by then football was rolling. Wilhelmi’s first season started with promise, but failed to record a winning record his final three seasons.

After the last few years of humiliation and heartbreak, once again a man named Cleo Hill has at least temporarily brought some excitement to a program in desparate need of it.