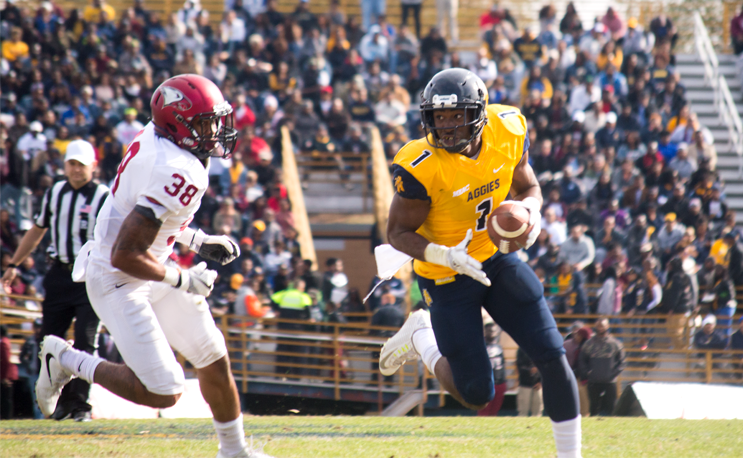 North Carolina A&T State University led the way in this year’s All-MEAC voting as the Aggies had 12 student-athletes named to the first team. The team is voted on by the MEAC’s head football coaches and sports information directors.

In a partnership with the National Football Foundation (NFF) & College Hall of Fame, the league’s Offensive and Defensive Players of the Year will be announced as part of the festivities surrounding the 60th NFF Annual Awards Dinner, Tuesday, Dec. 5, at the Hilton Midtown in New York City. The event will be televised live on ESPN3 at 9 a.m.

Parker capped off his final season in dominating fashion as he was named MEAC Offensive Lineman of the Week seven times while serving as the anchor of an offensive line that allowed the least amount of sacks in the MEAC. The Aggie offense put together one of their finest offensive seasons in university history as they led the MEAC in scoring offense (36.4 ppg), pass offense (257.5), first downs (231), 3rd down conversions (42.9%), 4th down conversions (61.5%) and time of possession (32:57). The Kannapolis, N.C. native and Walter Payton Award nominee finished the season without allowing a sack as N.C. A&T finished the regular season with eight games over 400-plus yards of offense.

Newton stepped onto the college football scene in style as he helped lead Howard to its first-ever FCS win at UNLV in his collegiate debut. From that point, Newton couldn’t be stopped as he guided the MEAC’s top-rated offensive unit (447.8 ypg) and rushing offense (217.4 ypg). Newton was the first freshman in MEAC history to surpass 3,000 yards of total offense (3,185) as he averaged 289.5 yards of offense per outing. The Jerry Rice Award nominee also led the MEAC in scoring as he combined for 25 touchdowns en route to leading Howard to its best finish and record since 2012.

All Broadway did in 2017 was win as the Aggies capped off their best regular season in school history with a perfect 11-0 (8-0 MEAC) mark. The Aggies are one of only two undefeated teams in FCS play and are the 2017 MEAC champions for the third time in four years. For the first time in 14 years, the Aggies are the outright conference champions. The Eddie Robinson Award nominee became the school’s second all-time winningest coach this season and has reached 50 wins faster than any other coach in school history, getting his 50th win at N.C. A&T in 72 games coached.

Congrats to Coach Broadway on being named 2017 MEAC Coach of the Year🏆 #AggiesAllIn #AggiePride #NCAT pic.twitter.com/dTYPmSnqv3

Broadway has one more game remaining as the Aggies will play in its second Celebration Bowl on Saturday, Dec. 16 at the brand-new Mercedes-Benz Stadium in Atlanta. No MEAC team has finished the season with a perfect regular season and postseason mark.

Listed below are the 2017 All-MEAC teams: