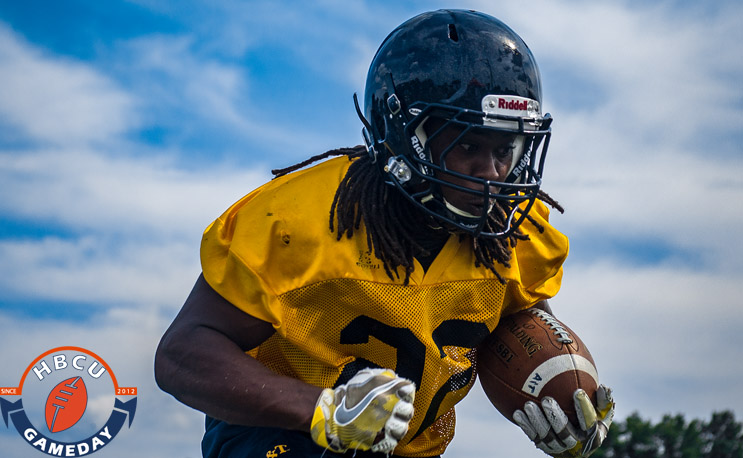 Aggies lacking experience, but not talent, heading into 2017.

How do you replace two of the most prolific offensive players in your school’s history? If you are North Carolina A&T football coach Rod Broadway, you just keep making chicken.

“That’s all we do, Brother,” Broadway said with a laugh at MEAC Media Day. “We got some gizzards and some livers, but for the most part we’re still making chicken.”

“Making chicken” is Broadway’s way of saying his team is going to stick to what works. Running back Tarik Cohen has been the lead cook on the field for the past four years, dizzying defenders, re-writing the record books and playing his way to being the first running back drafted in the NFL from an HBCU since 1998.

Cohen is now in training camp with the Chicago Bears. His running mate, Denzel Keyes, has exhausted his eligibility on the football field after a career that saw him set a new school record for touchdown receptions.

Despite losing a significant portion of its fire power, there are some pieces returning, the proverbial “gizzards” and “livers” if you will.

It starts at quarterback with Lamar Raynard. The redshirt junior made big strides during his first season as a starter in 2016 before injuries forced him to miss key late-season games against North Carolina Central (the game that decided the MEAC champ) and Richmond (opening round of the FCS playoffs.)

“If he would have stayed on course last year…could have finished his season, the way he was playing at that stretch of the season, I think we could have been a little bit better of a football team than we showed at the end of the year,” Broadway said.

“He’s got a chance of being outstanding,” Broadway said of Bell. “He had a great season last year, and he’s learned so much more about how to play the position.”

Of course, the biggest shoes of all to fill will be Cohen’s. That task will fall mainly on Marquell Cartwright, a slightly larger back (standing 5’8, 201 pounds) than Cohen who has shown flashes of potential in relief of and stepping in for his mentor.

“We have what I think is an outstanding running back,” Broadway said. “He’s no Tarik, but he’s outstanding.”

Overall, Broadway says his team may lack experience at spots, but the talent is certainly there.

“We have some really good players, we’ve just gotta get ’em coached up,” he said. “And we’ve got to get them playing fast and hard. If we do that, then I think I like our chances.”