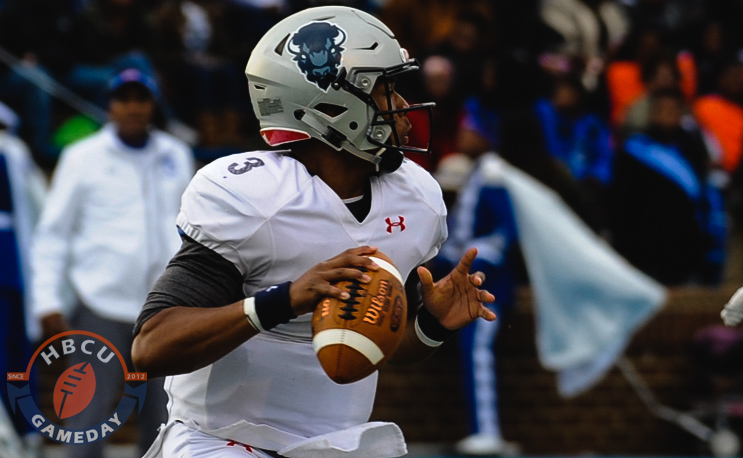 Caylin Newton’s name brought him fame when he chose Howard. It turns out that the youngest Newton was worthy on his own.

Caylin Newton has been in the spotlight from the moment he announced he would be attending Howard University last January. From the moment he stepped on the field, he made an impact. Now the freshman from Georgia has some hardware to go along with his accolades.

Newton has been named the MEAC Rookie of the Year, the conference announced on Tuesday. He finished with 3,185 yards of total offense, throwing for 2,432 yards and running for 753 more while coming up with 25 total touchdowns (13 in the air and 12 on the ground.)

Newton arrived in DC at almost the exact time that Howard hired former UVa. and Richmond head coach Mike London as its head coach. He wasn’t handed the job, but he earned it, taking the reigns of Howard’s “Go-Go” offense and putting that thing down like Chuck Brown.

A starter from the season opener, all he did was lead Howard to a 43-40 upset over UNLV. It was a landmark win over an FBS team for a program that often struggled to compete within its own conference. The game was called by some as “the greatest upset in college football history” based on Las Vegas odds.

Caylin Newton and @HUBISONFOOTBALL shocked Vegas and the world and we were all witnesses. #CutTheCheck https://t.co/hDuqzQriqf pic.twitter.com/iqvbRwCS9e

But Newton was more than just a one-hit wonder, as the rest of the MEAC soon found out. He rebounded from a tough outing against Richmond by scoring the game-winning touchdown against Bethune-Cookman in the conference opener. He would go on to do the same thing against Norfolk State late in the season as well.  All season, Newton showed poise that belied his freshman status.

He helped Howard pick up wins against programs that previously counted Howard as an easy win, like South Carolina State. With his father Cecil Sr., and brother, Cecil Jr., looking on, Newton made big plays on the ground and in the air helping his team to a big-time win.

A Legacy Of His Own

When Newton chose to come to Howard in January, his decision to play at an HBCU turned many heads. That’s because most people thought of him as Cam Newton’s little brother (and didn’t realize that HBCUs run deep in the family). He had some stumbles now and then, but he made more big plays than mistakes. Because of that, he’s also up for the Jerry Rice Award, given to the best freshman in FCS football.

After the season that he put together, the youngest Newton has definitely made a name for himself.